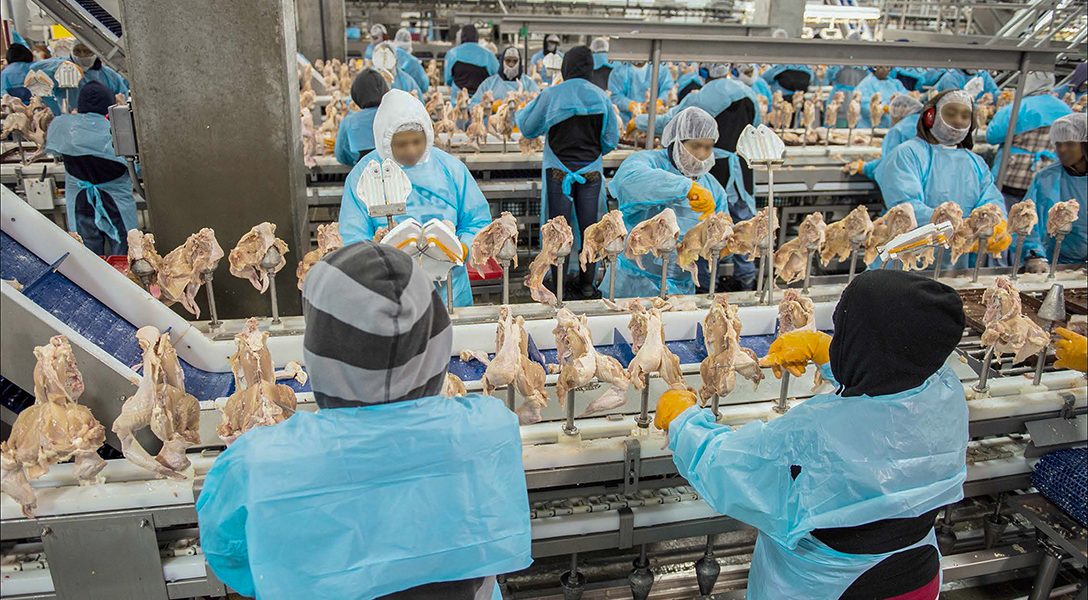 How fast is too fast?

A powerful food-industry lobby group is asking the Trump administration to reverse an Obama-era decision that limited speeds on chicken-processing lines. Animal rights advocates and worker activists claim that such a move would be illegal and dangerous, but the trade association has been working hard to ensure its petition is heard — and acted upon.

At the heart of the dispute is a rule restricting how many chickens can be processed per minute. The National Chicken Council (NCC) wants the regulation lifted so plants could process 175 chickens per minute, up from 140. Increased line speeds have been linked to higher occupational injury rates among poultry industry workers and increased risk to the consumer from tainted meat.

“They were all complaining that their line speeds couldn’t go up under the new rule, and he promised them he would figure out a way to raise the line speeds — just to give him some time.”

The industry tried but failed to get the speed-up approved under the Obama administration. Their chances would appear much better this time around, in light of the Trump administration’s “pro-industry” focus. But the NCC does not want to wait. The trade group is petitioning the US Department of Agriculture (USDA) to go around regular notice and comment rulemaking procedures, and bypass the public consultation process — in a manner that opponents say would violate the law.

Non-profit consumer rights group Food & Water Watch is one of a handful of advocates that have written to the USDA to oppose the move. In a letter to the acting Deputy Under Secretary of Food Safety and Inspection Service (FSIS) at USDA Carmen Rottenberg says “granting NCC’s petition through the agency’s waiver regulations, without public notice and opportunity to comment, would violate the Administrative Procedure Act (APA).”

In his letter to USDA, United Food and Commercial Workers (UFCW) President Marc Perrone says the petition from the NCC “clearly poses a dangerous risk to American families.” He cites a recent report from the Government Accountability Office which shows “that forcing lines to move faster will expose poultry workers to higher rates of injuries and illnesses.”

“This petition essentially requests that USDA create this new ‘no speed limit’ rule behind closed doors with no opportunity for notice and comment by the public as the regulatory process requires.”

Another hidden wrinkle is that a key figure in this saga, Rottenberg’s predecessor and former boss, is now taking a paycheck from the chicken industry. Alfred Almanza retired from his position as Deputy Under Secretary for FSIS at USDA at the end of July this year. His appointment as Global Head of Food Safety at the largest producer of meat in the world was announced the same week.

This does not sit well with opponents of the NCC’s petition, who have a close — if at times fractious — working relationship with FSIS executives. The executives meet monthly with both consumer groups and industry executives as a matter of course.

“At one point in one of the meetings, one of our discussions got so heated that he [Almanza] walked out. He just ended the meeting and walked out” said Tony Corbo, Senior Lobbyist with Food & Water Watch. In contrast, soon after the passing of the new rule to keep chicken-processing lines to 140 birds per minute, “he held one of his infamous soireés at the Old Ebbitt Grill in Washington, and had a little session with the Poultry Council. They were all complaining that their line speeds couldn’t go up under the new rule, and he promised them he would figure out a way to raise the line speeds — just to give him some time.” Earlier this year, Alfred Almanza moved from his position in the USDA as Deputy Under Secretary for the FSIS to Global Head of Food Safety for the world’s largest producer of meat.
Photo credit: USDA / Flickr (CC0)

Almanza went on to lay the foundation for the NCC petition in his capacity as head of the FSIS. He testified before Congress several times and, as Corbo recounts, “pro-poultry industry congressmen were asking him ‘why don’t you lift the ban on increasing line speeds, this seems to be an arbitrary position’. He danced around the question, but he finally said there is a provision in the final rule. He left the door open to increasing line speeds several times in congressional testimony.”

During hearings, members of Congress asking questions about increasing line speeds included Rick Crawford (R-AR) and Agriculture Committee chairman Mike Conaway (R-TX). They were among 16 on the committee who received campaign contributions from the National Chicken Council.

UFCW president Perrone also addressed the public notice dodge in his letter, writing “this petition essentially requests that USDA create this new ‘no speed limit’ rule behind closed doors with no opportunity for notice and comment by the public as the regulatory process requires.”

The argument last played out over two long years of public consultation ending in the 2014 decision by the USDA to keep production line speeds to a maximum of 140 birds per minute, in conjunction with the creation of the New Poultry Inspection System (NPIS) — an “updated science-based inspection system” which reduces the number of USDA inspectors on every chicken evisceration line and replaces them with company-hired “sorters.”

It was a high-profile consultation which became a civil rights matter as well as a food safety issue — the NAACP and Southern Poverty Law Center became involved to protect the rights of workers to a safe workspace. The Occupational Safety and Health Administration reports that “the incidence rate of occupational illness cases reported in the poultry industry is more than six times the average for all U.S. industries.” The overwhelming public outcry in response to the consultation was the reason the USDA decided to keep the line speeds lower, as acknowledged by Almanza himself during his appearance before the House Appropriations Agriculture Subcommittee in February 2016, when pressed by Rep. Rosa DeLauro (D-CT).

Hilary O. Shelton from the NAACP was instrumental in lobbying against the initial line speed increase request. He said he was not surprised that industry was trying once more to raise the cap, and added that the attempt to circumvent the public consultation phase was “deeply concerning — transparency as we are addressing issues like this is crucial.”

But he also struck a conciliatory tone. “We’d love to hear everything they plan on doing that would address the issue of safety for the employees — what will you do to accommodate these many concerns that have been raised by so many — how you can do that without further imperiling them in carrying out their job responsibilities. Certainly it is an issue that can be discussed, but it’s an issue that has to come with real solutions to address real problems with real human workers on those production lines.”

He also had a thought for the chicken-loving general public — “when you’re speeding through a process like this sometimes the protocols necessary to ensure product safety for the consumer can be jeopardised.”

Almanza’s new employer JBS Foods is the owner of Pilgrim’s Pride chicken production facilities in the US. Pilgrim supplies one-fifth of all chicken consumed in the US. JBS/Pilgrim’s Pride’s record on worker safety is among the worst countrywide, coming in sixth highest out of 14,000 companies reporting amputations and hospitalisations to the federal government.

When asked if Almanza had a hand in wording their petition, the NCC responded that “the petition was written by the NCC” — which raises the possibility that NCC’s member companies had a hand in its crafting.