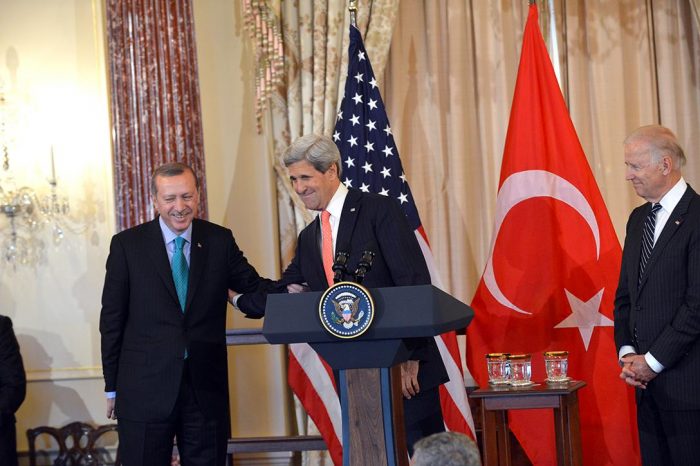 A news organization is only as good as its accuracy, the relevancy of its content to the public, and the roadmap it provides for understanding world events, past, present and future. With that in mind, we thought it worth highlighting this article from May in which we raised the distinct possibility of a military coup in Turkey. That coup is now underway.

Here’s our original article, with some useful context to the unfolding events:
Turkey’s increasingly dictatorial president, Recep Tayyip Erdogan, scored yet another domestic victory Thursday, with the resignation of Prime Minister Ahmet Davutoglu, his former ally who nominally holds the reins of the country.

Erdogan is now free to push for a change in the constitution that would transfer more power to himself. But this act also highlights his growing political isolation, which many believe will spell the end his career — an outcome of great concern to the US and its European allies.

Western leaders desperately need Turkey to remain stable. As a key NATO ally in a volatile region — NATO’s second-largest army, in fact — and the country that is supposed to protect Europe from another flood of refugees, a lot is riding on Turkey’s stability. But the oppressed half of the country does not share the same sentiments, and talk of a possible coup against Erdogan is growing louder.

Perhaps the surest sign of trouble for his political future is the sarcasm pouring in on Erdogan from all sides — from the cover of the leading German magazine Der Spiegel to an “Insult Erdogan” contest sponsored by a prominent British magazine to homegrown social media.

Put simply, Erdogan may be turning into more of a liability for the West than a solid defender of NATO’s eastern flank that he was once touted to be.

Of course, his fate will be decided not in Washington or Berlin or Brussels but in the Byzantine politics of Erdogan’s palace court. His political survival instincts have proven themselves time and again in the past. But now either a political coup or a military intervention may be in the offing because Erdogan has polarized the country to a breaking point while at the same time removing, one by one, all legal means available for people to dissent.

At home, his failed policies have resulted in a string of bloody terror attacks in Turkey’s major cities that have claimed hundreds of lives over the past few months. He has repeatedly ignored the country’s constitution, defied the top court, fired police and prosecutors investigating his allies for corruption, reignited a bloody civil war with the Kurds in the country’s southeast, and steamrolled over free speech.

Internationally, he stands accused of supporting Islamist extremists (possibly all the way up to colluding with ISIS), helping Iran avoid international sanctions, trying to maneuver NATO into a conflict with Russia, and extorting European leaders over the refugee deal. More recently, he has even tried to persecute critics in Germany and elsewhere.

Newsweek unleashed a political storm in Turkey when it republished the analysis of a former Pentagon official who concluded that, should elements in the Turkish military stage a coup, they would “get away with it.” The mere utterance of the word coup in a country that has a long history of them sent shockwaves through the Turkish establishment.

The country’s military, its memories fresh of the time Erdogan jailed the equivalent of an entire army college of top officers for allegedly plotting against him, issued an uncharacteristic denial. Nevertheless, just days ago, the top appeals court released all 275 suspects in that affair, possibly elevating the army’s political fortunes once again.

For the moment, though, outside experts see little chance of a military takeover.

“It seems clear that the military command is firmly in the hands of the government,” said Jenny White, a prominent Turkey analyst at Stockholm University. At the same time, she cautioned that the thinking of Turkey’s military leaders remains opaque.

Meanwhile, Erdogan seems locked in an ever-escalating cycle of paranoia and vengeance. He has had thousands of journalists, academics and even school children arrested for criticizing him. His son is under investigation for corruption in Italy as part of a scandal that Erdogan tried to sweep under the rug back in 2013 and 2014 when he fired police and prosecutors.

Another suspect in the same corruption scandal, Reza Zarrab, was arrested in Miami on charges that he helped Iran avoid US sanctions. Many analysts believe that Zarrab, shaken by the hanging of his business partner in Iran, probably struck a deal with the FBI to get a lighter sentence and US protection in exchange for information that could be greatly damaging to Erdogan.

The Turkish president himself is now the target of protests in almost every Western country he visits. Scenes of his bodyguards beating protesters, as they do at home, or making loud animal sounds to drown out the condemnations pouring in on him have made him even more toxic and embarrassing to his Western counterparts. Far from being the “valued ally” that he was back in 2013, an Op-Ed in the New York Times noted, his reception when he visited Washington DC this year was “the diplomatic equivalent of a handshake after a romantic date.”

All this is important because, having fallen out with Russia and most of its neighbors, thanks to Erdogan’s policies, Turkey is now as dependent on the West as the other way round. US support was arguably key to Erdogan’s ability to avoid another coup threat back in 2007 when he was still branding himself a moderate Islamic democrat. And the top brass of Turkey’s army, according to many Turkish analysts, is still often closer to its counterparts in the US and NATO than to the political leadership of the country.

With the political situation so polarized, even some of Erdogan’s closest former allies are grumbling.

“We are seeing opposition figures within the AKP [the ruling Justice and Development Party]… raising their voices against Erdogan,” said Ege Seckin, a Turkey expert at the London-based analysis firm IHS.

Turkey is still officially a parliamentary republic and Erdogan was forced to formally surrender both the executive power and control over the ruling party when he was sworn in as president in 2014. Although he has installed figureheads to govern AKP, he is clearly nervous about the possibility of an internal party coup.

“People are very wary of taking on Erdogan,” said Seckin. “But then again, you have to bear in mind, these things — it would all happen at the blink of an eye. … As soon as people see, wow, he is losing power, there will be a rush of support away from Erdogan.”

And if that happens, all bets are off for the larger regional picture.