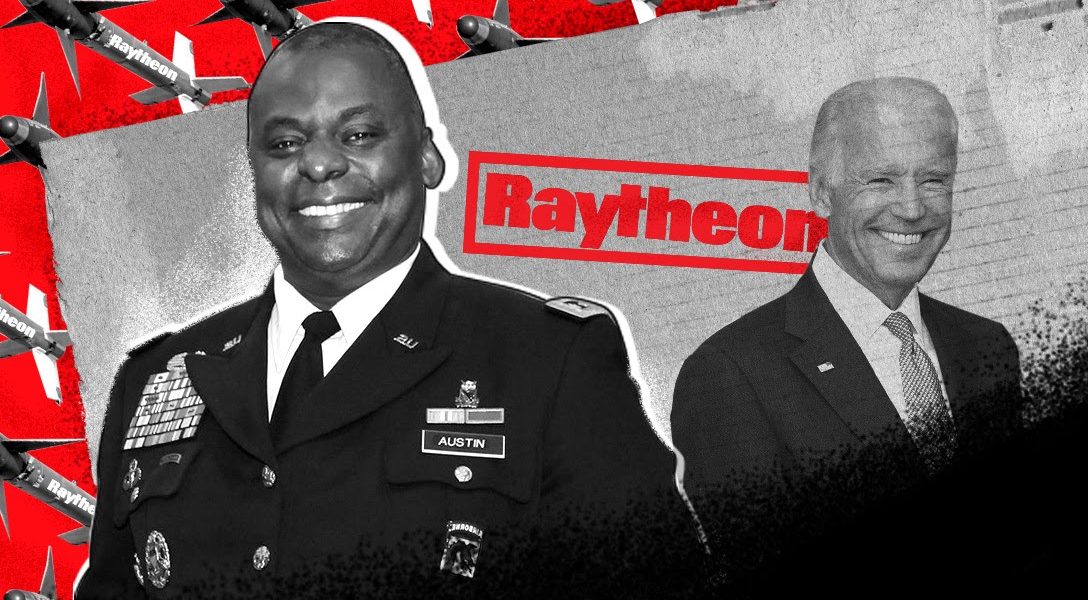 Gen. Lloyd Austin III is a retired four-star general who serves on the board of military contractor Raytheon Technologies. If Austin becomes defense secretary, that corporate tie could get complicated. Photo credit: Adapted by WhoWhatWhy from U.S. Army Corps of Engineers / Flickr , US AirForce, Raytheon / Wikimedia, US AirForce, U.S. Department of State / Flickr, and US AirForce
Government Integrity

Administrations Come and Go, but Raytheon is Forever

Last month, two progressive members of Congress sent President-elect Joe Biden a letter requesting that he nominate a defense secretary who did not have ties to the defense industry. The most recent secretary of defense under President Donald Trump, Mark Esper, had been a lobbyist for Raytheon, one of the biggest military contractors in the world.

Their pleas fell on deaf ears. On Wednesday, December 9, Biden announced his new pick for secretary of defense, Gen. Lloyd Austin III. On the left, the response has been mixed — some praise the naming of a Black man as a historic first, while others see trouble looming in Austin’s corporate ties. Because, like Esper before him, Austin has a relationship with Raytheon: he serves on the board of directors. For many in the world of public policy, this is problematic.

“The potential for conflicts is huge,” said William Hartung, the director of the Arms and Security Project at the Center for International Policy, a progressive, nonprofit think tank. Hartung said that if Austin were to recuse himself from those potential conflicts of interest involving Raytheon, he wouldn’t even be able to carry out large parts of a defense secretary’s responsibilities.

Indeed, there is already speculation that conflict-of-interest issues may force Austin to recuse himself from decisions on major contracts for which Raytheon is in the running, like the F-35 Joint Strike fighter.

Moreover, Raytheon is a company that has proven it requires high-level oversight. It sells everything from missiles and jet engines to ejection seats and radar systems to all branches of the US military. According to the Project on Government Oversight (POGO), Raytheon maintains government contracts worth more than $16 billion. (As huge as that is, that number makes it only the fourth biggest US government contractor in 2019.)

Its business dealings extend to allies overseas — and their conflicts.

He Told You So: President Eisenhower’s Military-Industrial Complex Speech

Raytheon has a long history of questionable and illegal behavior. According to POGO, the company has had 32 cases of misconduct since 1995, incurring $491 million in penalties.

Now that the incoming Biden administration has thrown its weight behind Austin for defense secretary, let’s look at some of Raytheon’s greatest hits:

Many good government groups believe when you put people with strong corporate ties in government office that regulate those same businesses, the public interest will inevitably suffer. And they don’t see Biden’s pick of Austin as the only example of this.

Another example is the selection of former Iowa Gov. Tom Vilsack, who served as secretary of agriculture under Barack Obama and has strong ties to Monsanto, as head of the Department of Agriculture. And Rep. Cedric Richmond (D-LA), a top recipient of oil- and gas-industry money, as director of the White House Office of Public Engagement. That office would be responsible for helping to advance the administration’s agenda on climate change.

For those voters who wanted to drain the swamp in Washington, Biden’s cabinet picks — and their big-money corporate connections — look like a lot more of the same.