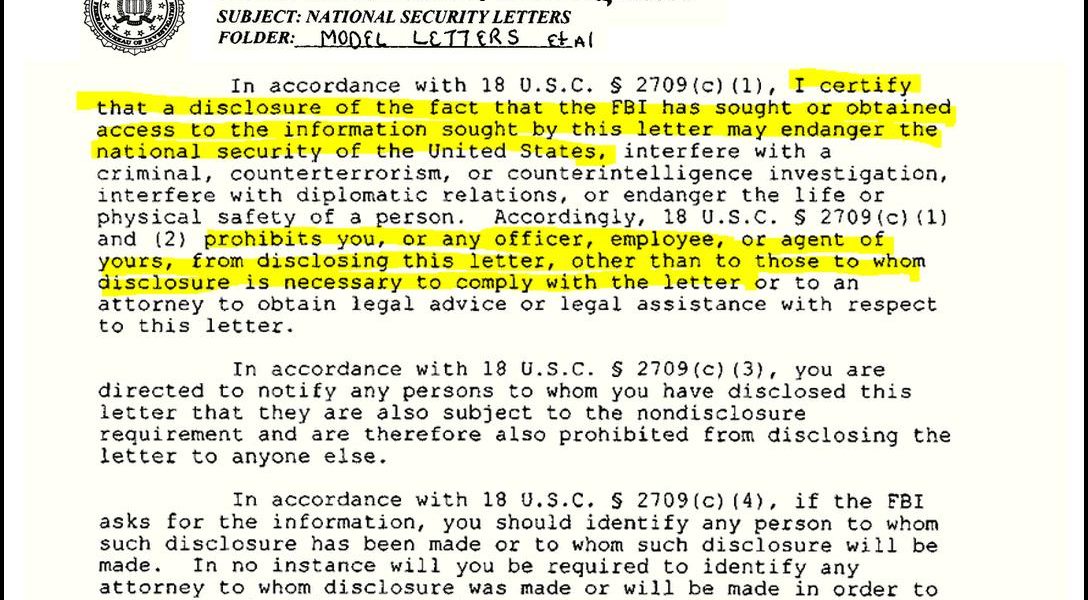 In a victory for privacy advocates, a federal judge for the first time fully lifted a gag order associated with a National Security Letter (NSL).

The details of the case are complex, but the decision is a powerful affirmation of free speech protections under the First Amendment of the Constitution.

NSLs are subpoenas that do not require the approval of a judge. The government uses them, ostensibly for the fight against terrorism, to obtain personal information from Internet service providers, banks and other businesses that keep data on US citizens. NSLs come with a gag order that prevents companies from discussing them. Consequently, few members of the public are aware of them despite their proliferation in the ever-expanding surveillance state. A 2007 Justice Department report showed that the FBI issued nearly 200,000 NSLs between 2003 and 2006.

“These letters … allow the FBI to secretly demand data about ordinary American citizens’[s] private communications and Internet activity without any meaningful oversight or prior judicial review,” says the Electronic Frontier Foundation (EFF), a nonprofit digital-rights group.

In 2004, an NSL was issued to Calyx Internet Access, a now-defunct Internet service provider run by Nicholas Merrill. Instead of complying with the federal request for information — and the gag order — as was done by most Internet providers, such as Verizon and AT&T, Merrill chose to challenge the restriction on his constitutionally-protected free speech. For more than a decade, he sought the right to disclose the letter’s contents and even its mere existence.

A judge recently ruled in his favor in what is believed to be the first such victory for the recipient of an NSL. The decision means that the public is now on the verge of finding out what type of information businesses have been asked time and again to turn over to federal agents.

“Courts cannot, consistent with the First Amendment, simply accept the Government’s assertions that disclosure would implicate and create a risk,” Judge Victor Marrero said in his decision, referring to NSL gag orders limiting even discussion of a letter’s receipt.

The EFF has been monitoring the FBI’s use of NSLs for some time and won a court case in 2008. As a result, the FBI withdrew an NSL issued to the Internet Archive after two NSL-governing statutes were deemed unconstitutional.

The gag order associated with that NSL was partially removed, allowing for the discussion of the NSL’s existence — but not which types of information had been requested. While the 2008 decision was a victory for privacy advocates, it was not as complete as this one.

Calyx’s win comes four months after Congress passed the USA Freedom Act, which was signed by President Barack Obama on June 2. In addition to prohibiting bulk collection of US citizens’s electronic data, the law also altered the language of the gag orders. Previously, the language constrained the discussion of NSLs so completely that recipients would have been in violation of the gag simply by approaching legal counsel for advice. With the passage of the legislation, recipients may now discuss the NSL with

However, the public may still have to wait to learn the specifics of the FBI’s use of an NSL, for example which sites users visited. Although the FBI investigation that resulted in the 2004 NSL to Calyx Internet Access is officially over, Judge Marrero’s decision continued Merrill’s gag for 90 days to allow the government an opportunity to appeal. Such an appeal would further delay public access to the kind of information the Bureau was seeking about Internet users.

What the judge rejected in the Calyx case was the FBI’s argument that national security would be harmed by revealing the mere existence of an NSL. The government might appeal on the grounds that making public the types of information sought in NSLs would allow the targets of future investigations to better conceal their activities.

But if government investigators can order one person to provide information about another person while preventing the first person from disclosing what information they were asked to reveal or even talking about this order, the First Amendment protection of free speech stands in jeopardy. The final disposition of the Calyx case may offer a glimpse into the government’s justification for using such constitutionally dubious means to “fight terror.”