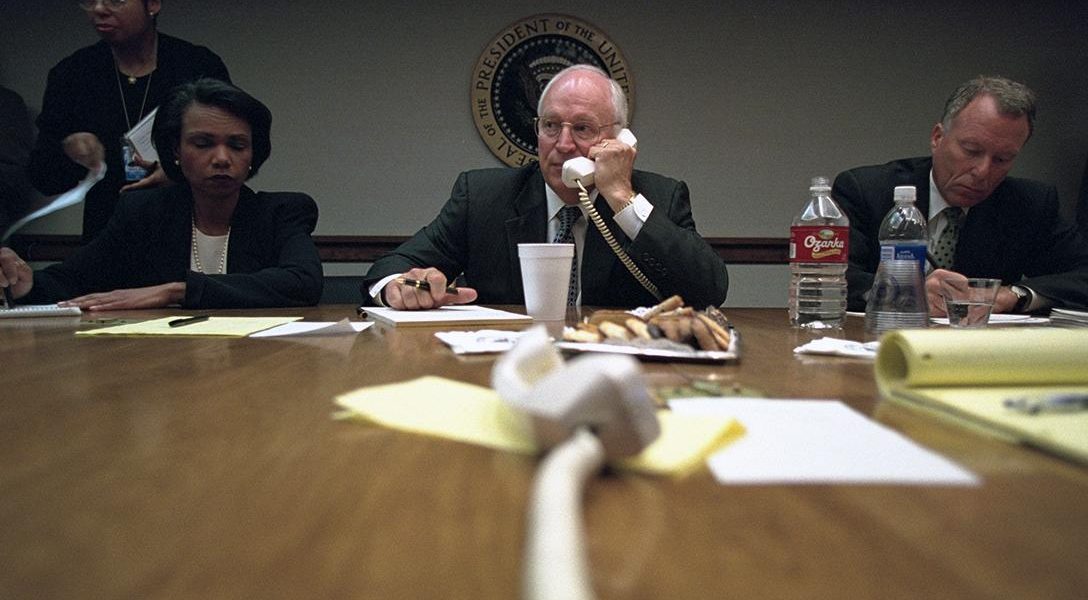 Years of willful deception, the sands of time, and simple neglect all tend to cloud our perception of the reality of history. This is especially true for politically radioactive topics like 9/11.

With the debate over 9/11 heating up as the 15th anniversary of that fateful day draws near, it’s a good time to get back up to speed. WhoWhatWhy believes there are essential pillars of the 9/11 debate that must be acknowledged by all parties before any healthy discussion of that paradigm-changing topic can take place.

What follows is a refresher list of “known knowns” — select, broad aspects of 9/11 that are at present beyond reasonable doubt: •  The money trail was never followed to its logical conclusion. The 9/11 Commission concluded the question of who funded the attacks “was of little practical significance.”

•  The Bush White House pushed back against any independent investigation into 9/11.

•  Once the White House agreed to an independent investigation, it provided a budget of $3 million, or 27% of the amount requested by 9/11 Commission co-chairs, Thomas Keane and Lee Hamilton.

•  The Bush White House’s first choice to lead the 9/11 Commission was the highly controversial Henry Kissinger. Under intense pressure due to conflicts of interest, he resigned a month later.

•  The 9/11 Commission was compromised by having White House policy advisor Philip Zelikow as its executive director. He was alleged to have been in close contact with controversial White House Chief of Staff Karl Rove throughout the investigation.

•  The 9/11 Commission — the only independent investigation into the greatest terror attack in US history — began with a particularly benign mandate. The Preface to the report asserted: “Our aim has not been to assign individual blame,” but “to identify lessons learned.”

•  Saudi agents — some with ties to the White House — sent financial and logistical support to men who then provided that support to the hijackers. That’s according to the Congressional 2002 Joint Inquiry report, multiple media accounts and at least one FBI agent who worked on 9/11 cases.

•  Efforts to further investigate Saudi nationals were resisted by the White House and CIA over and over again.

•  Indian intelligence, corroborated by the FBI, showed a wire transfer of $100,000 from the phone of Pakistan’s Inter-Services Intelligence (ISI) chief Mahmud Ahmad to 9/11 lead hijacker Mohammed Atta in 2000. Ahmad (also reported as Ahmed) was in Washington D.C. on the morning of the attacks, meeting with US lawmakers.

•  The $100,000 transaction was never mentioned in the 9/11 Commission report — and Ahmad was never detained for questioning.

•  The “28 pages” from a redacted chapter of the 2002 Joint Inquiry report into the attacks, we were told, had “nothing to do with national security.” But national security was the very reason given for withholding them for 14 years by both the George W. Bush and Barack Obama White Houses.

•  Those 28 pages were partially released in July of 2016, but were still heavily redacted at crucial passages.

•  Multiple, overlapping war game drills created some level of confusion at the North American Aerospace Defense Command (NORAD) and the Northeast Air Defense Sector (NEADS) on the morning of the attacks.

•  Around noon on 9/11, air traffic controllers who handled some of the hijacked flights made a recording recalling their experiences of the events from a few hours earlier. The tape was later destroyed by an unidentified FAA supervisor without any transcripts taken.

•  In the days before 9/11, highly abnormal levels of put options — bets that a stock price will fall — were in place on major US stock markets for not only the airlines involved, but also for multiple financial giants that suffered significant losses in the attacks.

•  The SEC’s investigation into those irregularities gave little details for their benign conclusion that all trades were legitimate and curiously destroyed all their records.

•  Blaming Iraq was the talking point advanced by the Bush administration within days of the attacks. Later, multiple reports surfaced alleging that the neoconservatives who made up the hawkish Project for a New American Century think tank and the Bush Administration had been planning for (and discussing the need to publicly justify) an invasion of Iraq (and Afghanistan) long before 9/11.

•  Opium production (used to make heroin) in Afghanistan plummeted under Taliban rule in 2001, but then ballooned again when US forces retook control of the region.

•  In the late 90s, the US supported the Taliban and its agenda for a unified Afghanistan. Three years before 9/11, US oil giant Unocal pulled out of a long-negotiated deal to build natural gas and oil pipelines through the region, from the resource-rich Caspian basin south to the Indian Ocean. Skeptics insist the US government and Unocal suddenly saw the Taliban, which provided a base of operations for Al-Qaeda, as an obstacle to those pipeline plans.

This is by no means a full list of inadequately-investigated facts surrounding 9/11.

People loyal to the official narrative at first denied the veracity of many of these facts. Later, when the corroborations and confirmations became overwhelming, they shifted gears, insisting these “knowns” didn’t matter.

We invite you to add your own bullet points in the Comments section below, though we encourage you to focus on what has been well-documented, i.e., what is available for all to verify on the public record.