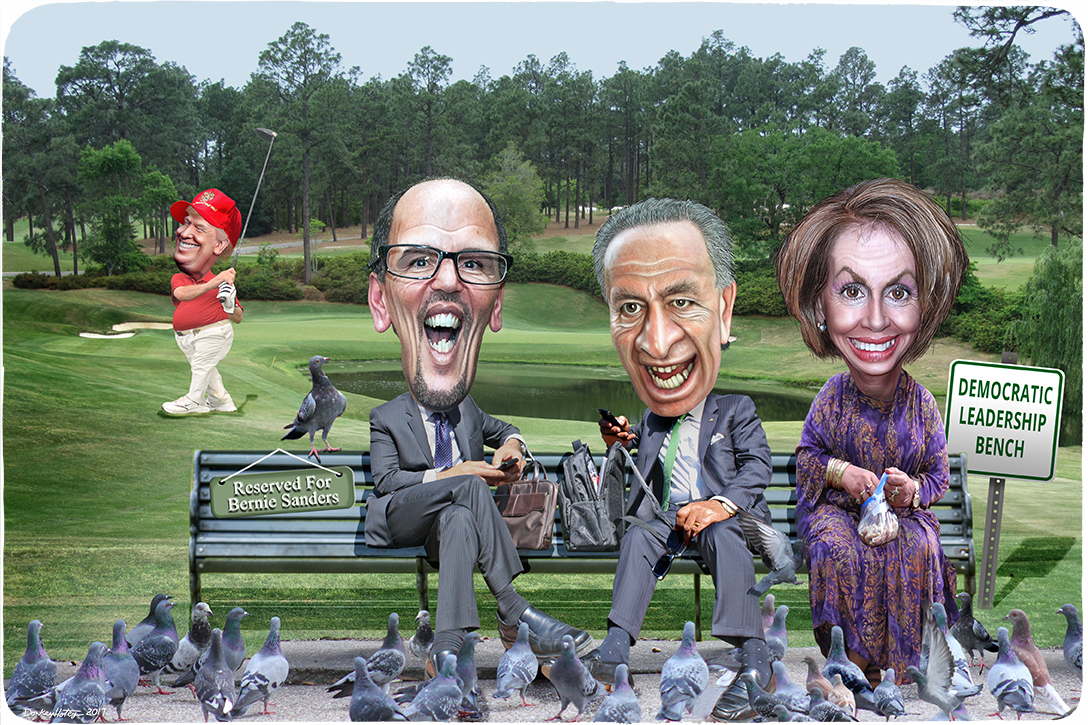 We are still waiting for demographics to do our jobs for us. Photo credit: DonkeyHotey / WhoWhatWhy (CC BY-SA 2.0) See complete attribution below.
Cartoon Government Integrity Opinion

Donald Trump has been president for 100 days and things are going pretty well for him. In many ways, he resembles the classic character of Inspector Clouseau from the Pink Panther series — a comically inept, bumbling fool who solves cases through sheer luck and gets promoted in spite of his stunning incompetence.

Most of the assessments of Trump’s first three months in office are overwhelmingly negative, as journalists are still grappling with the phenomenon of the 45th president and his loyal followers. If Trump’s presidency were viewed through the same lens used to evaluate previous presidencies, then it would truly be considered a disaster.

Hardly a day goes by without some anecdote revealing that Trump is in completely over his head, is caught in some blatant, easily disprovable falsehood or grasps the intricacies of the US government at the level of a high-school student who has done none of the reading but hopes to get a C.

But the old standard does not apply anymore and none of the above has really hurt Trump. His apparent conflicts of interests have also not been a problem for him; neither has his habit of spending weekends at his properties golfing.

A whopping 93% of Republicans approve of the job he is doing and a recent poll shows that, if last November’s election were held with the same cast of characters, he would beat Hillary Clinton 43-40.

Those numbers reveal a major problem for the Democrats. They lack leadership. Clinton largely disappeared after her loss, and, just like House Minority Leader Nancy Pelosi and Senate Minority Leader Chuck Schumer, she is old. Trump’s predecessor, Barack Obama, dropped off the radar for those first 100 days; he only reappeared in the headlines when it was revealed that he would take a huge Wall Street speaking fee. None of these “leaders” are endearing themselves to the progressives who are fueling the anti-Trump surge. While Vermont Sen. Bernie Sanders, who is also old, remains popular with that demographic, he is neither a Democrat nor has he been much of a team player since the election.

Therefore, Trump benefits from an opposition divided between an unpopular party and a resistance movement that still lacks organization. The numbers back that up. Individual candidates, especially “darlings” of the progressive movement, have raised a lot of money, but the Democratic Party trails the GOP in terms of donations received in the first quarter of 2017.

While a couple of Democratic candidates have closed the gap in conservative districts in two special elections for open House seats, they haven’t won either — although there is still an outside chance that may happen in Georgia.

None of this bodes well for a party whose best chance of truly stopping Trump is to win back either chamber of Congress next year.

One reason the chances of that happening are not great right now is that the Republicans have proven to be inept at governing. While that might seem like a contradiction, it is not. Trump’s agenda, if passed, would significantly and directly harm millions of the voters who put him in office. The president’s inability to, for example, sign an Obamacare repeal into law actually helps him because millions would lose their health insurance under “Trumpcare.”

So far, the vast majority of the new president’s actions — mostly executive orders — have had little  short-term effect. Instead, their impact, in particular on the environment, will be felt in years to come.

Another issue that helps the president is the sheer volume of outrageous statements, potential ethics violations, breaches of etiquette, reports of infighting, and rumors coming out of the White House. It’s difficult for anybody to keep up.

Finally, Trump has also learned that military strikes gain him positive media coverage because the corporate press loves images of America asserting its will in faraway places. The president has a great instinct for these displays of force and he also seems enamored of the power he now has at his fingertips, so there is a good chance we will see more military actions — in particular, targeted strikes that might not deter an enemy but will surely help Trump’s standing at home.

Where does that leave us after 100 days? Yes, Trump is historically unprepared for the job. He is also incredibly unpopular for a first-term president at this stage of his time in office. In spite of all that, the Democrats’ path toward taking back the House (probably the more likely chamber for them to win), seems narrow. There are reasons for that beyond their own ineptitude, such as the gerrymandering of congressional districts and voter-suppression measures being passed in many GOP-held states. But it’s also true that, so far, Trump is doing what he has to do to keep control of Congress in 2018. And that is the only measuring stick that really counts.