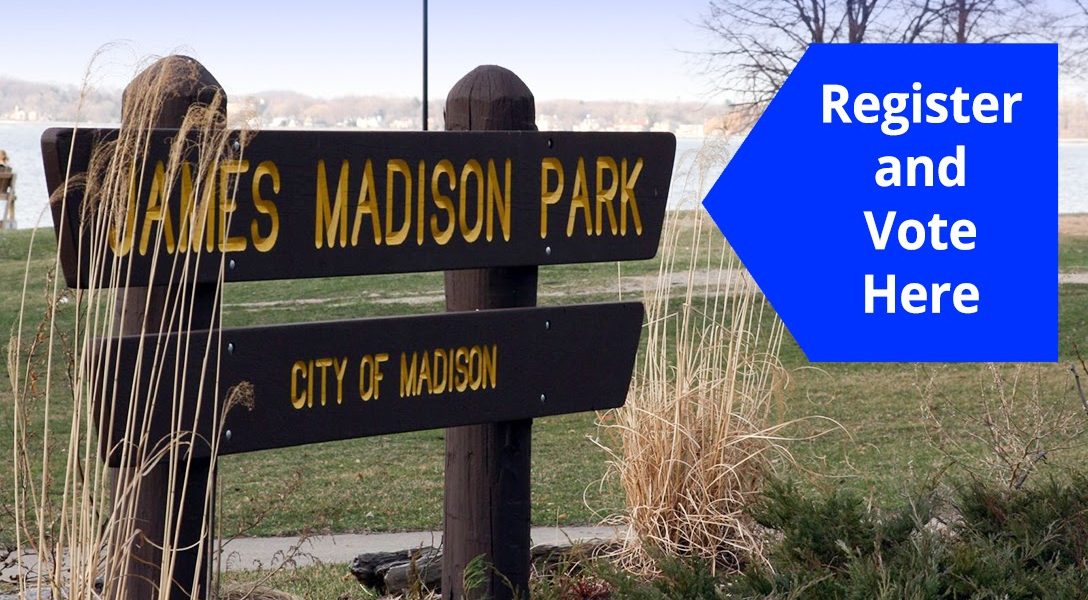 James Madison Park in Madison, WI, is one of dozens of city parks hosting Democracy in the Park events to register voters and collect completed ballots. Photo credit: Adapted by WhoWhatWhy from joelrivlin / Flickr (CC BY 2.0).
Elections

A trio of 20-somethings walked down the sidewalk underneath trees beginning to change color with the seasons. A couple of bicyclists whizzed past the bilingual VOTE/VOTAR sign with the big arrow pointing toward poll workers at a table in B.B. Clarke Beach Park on the shore of Lake Monona.

Despite the rainy autumn weather, Madison voters turned out to practice their right to vote, even in the face of Republican claims that what they were doing was a threat to democracy.

Madison’s Democracy in the Park initiative was just the latest example of many conflicts currently raging between Republicans and voting-rights activists that could impact the presidential election.

The event took place in every public park in Wisconsin’s capital city on September 26 and October 3. Voters could turn in mail ballots to poll workers, or register to vote and learn about the voting process.

“What’s nice about Madison is that we have the most parks per capita in the country so it allows someone to have a place where they can drop off their ballot or get registered that’s within a 10-minute walk of their residence,” Deputy City Clerk Jim Verbick said.

Over 17,000 absentee ballots were collected on the two consecutive Saturdays, according to Madison City Clerk Maribeth Witzel-Behl.

Democracy in the Park was planned partly to address worries about voting during the ongoing COVID-19 crisis, including crowded polling stations, long lines, and potential issues surrounding the US Postal Service delivering mail-in ballots to elections officials.

Emily Mills, a poll worker, collected ballots and registered voters during the event. Mills says the ballots collected at the parks were sealed, and poll workers inspected them for signatures and acted as witnesses for those that didn’t already have them. Individuals who registered to vote were required to provide proof of address. Elections observers were also present at some of the 206 city parks.

However, Republicans in the Legislature asserted that the event was illegal and have raised concerns about the ballots collected. In a September 25 cease-and-desist letter addressed to City Clerk Witzel-Behl, Wisconsin Assembly Speaker Robin Vos and Senate Majority Leader Scott Fitzgerald argued that the “threat” Democracy in the Park poses “to ballot integrity is manifestly obvious.” They maintained that the ballot collection occurred in “unsecure, outdoor locations” and that poll workers “only deliver these ballots to the City Clerk’s Office at the end of the six-hour campaign.”

In their letter, the Republicans also argued that Democracy in the Park constituted early voting. October 20 is the first day that Wisconsin offers in-person absentee voting. “There is a grave risk that all ballots you collect through this campaign will be challenged in court and ultimately invalidated,” the letter said.

Supporters of Democracy in the Park and city officials say that since voters came with their own absentee ballots, which had been mailed to their homes rather than distributed at the parks, Republican fears of illegal early voting were unfounded.

“What we did was entirely legal. All proper safeguards were taken to secure the ballot and treat them just the same as we treat any other absentee ballot,” Verbick said.

The city clerk told the Wisconsin State Journal that the ballots collected during Democracy in the Park have already been mixed in with other absentee ballots, which could make any effort to unsort them extremely difficult.

Mills, the poll worker, expressed concern that Vos and Fitzgerald would try to invalidate ballots. “I certainly worry about that, especially if the lawsuit [makes] its way up to the [State] Supreme Court.” Wisconsin’s Supreme Court has a conservative majority.

“The biggest feeling I have is just disappointment because this is something that makes voting more accessible to more people,” she said.

For Republican lawmakers, she said, “there are much better uses of your time and energy, especially as leaders, and your focus should always be that democracy is accessible to more people.”

Mills thinks that if the ballots are invalidated there would have to be a “major groundswell of action” to prevent it from happening. One of those has already occurred: On September 30, five voters filed a lawsuit in Dane County Circuit Court to ensure the thousands of ballots collected at Democracy in the Park events are not invalidated.

Conspiracy theories related to the event made the rounds on social media and conservative news sites. These conspiracies mostly focused on claims that the Biden campaign was funding the event and that it was a “ballot harvesting scheme.”

Mills says that these conspiracies made it to the Democracy in the Park event, such as when a middle-aged couple, after asking her a series of “very leading” questions regarding registering to vote in the park, stated that the Biden campaign was behind the event and then left. “It was pretty clear what they were angling for, and they did not get it,” she said.

Verbick denied that any other groups were involved with Democracy in the Park other than the city. “We’ve had a lot of people retweet things and otherwise promote it, but this is 100% us. All the funding for everything is coming directly from our budget. All the people are our poll workers or people who are voter education ambassadors trained by us. All the advertisements are by us too, mostly just tweeting and press releases and stuff like that.”

Verbick said that many voters were confused about whether their ballots would be counted. “It’s really unfortunate that a lot of it was due to misinformation that was spread by some in the Legislature and media.”

He also said that some voters decided not to participate in Democracy in the Park because they had heard the event was illegal or that their ballots would not be counted.

Despite the uncertainties and concerns raised by both sides, Dane County, home of Madison, currently leads the state in the number of absentee ballots returned. About 60,000 absentee ballots have been returned in the City of Madison alone so far, according to City Clerk Witzel-Behl.