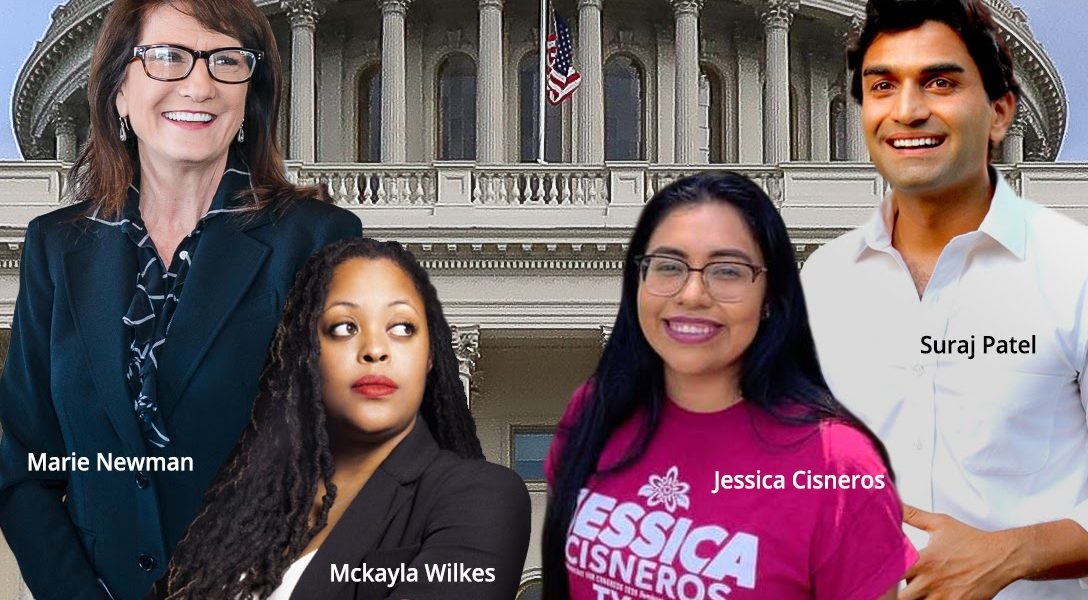 Will the Coronavirus Undercut 2020 Progressive Insurgents?

For progressive activists, this primary season started off with a bang. They won a close race in Illinois, lost a close one in Texas, and have many other competitive candidates running across the country.

But the coronavirus pandemic has the potential to roil these races in unpredictable ways. The end of direct voter contact and door-to-door canvassing — tactics used by underdog progressives to even the odds against better-funded opponents — could potentially handicap these challengers.

After losing to conservative Democrat Dan Lipinski in Illinois’s 3rd Congressional District in 2018, progressive challenger Marie Newman reversed the outcome this year, topping the incumbent by a comfortable 3.5 percent. And that was not the only hopeful sign for the party’s left wing.

Two weeks earlier, Rep. Henry Cuellar of Texas (D), who voted to defund reproductive services for women’s health and got an “A” rating from the NRA, barely survived a spirited primary challenge from progressive Jessica Cisneros.

With establishment stalwarts like Steny Hoyer (D-MD), Richard Neal (D-MA), and Eliot Engel (D-NY) all facing credible left-of-center primary opponents, the chances are rising for another upset like the one Alexandria Ocasio-Cortez (D-NY) pulled off in 2018.

But can these insurgents adapt to the new reality and find ways to replace proven forms of face-to-face voter contact? Necessity Is the Mother of Invention

“A lot of our candidates are shifting to digital, distance, organizing, which has been a tool in the toolbox all along,” Yvette Simpson, CEO of Democracy for America, told WhoWhatWhy. “Phone banking, for instance, having your volunteers do postcards, tele-town halls, virtual town halls, trying to find different ways to connect with folks who are more remote.”

Democracy for America is a political action committee dedicated to electing “people of color and white progressives” to all levels of public office.

“We have been stunned at our volunteers’ willingness to quickly transition to alternative methods of voter contact, especially phone banking,” noted Mckayla Wilkes, a candidate in Maryland’s 5th Congressional District opposing Hoyer, the number two Democrat in the House. “In just the past couple of days, our campaign has beaten our initial phone banking benchmarks.”

According to Mike Fox, deputy executive of the Progressive Democrats of America, phone conversations can be as persuasive as a conversation at the door — and campaigns have access to everybody’s phone numbers.

Progressive Democrats of America is another political action committee dedicated to electing candidates that belong to the party’s left wing.

Reports from other parts of the country confirm the shift in campaign strategy. Digital town halls, virtual phone banks, Facebook Live events, and paid social media are in. Door-to-door canvassing, campaign rallies, and other forms of close voter contact are out.

A few candidates are dropping the standard political pitch altogether in favor of educating voters about health resources available during the crisis.

Instead of his volunteers reciting the traditional political script, Patel is turning phone outreach to seniors into compassionate “check in” calls.

The Newman-Lipinski Rematch: Lessons for Insurgents

Though the Newman-Lipinski 2020 primary was fought out before the pandemic prevented close voter contact, many think it has important lessons for insurgent candidates.

“Lesson number one: Learn, and hopefully you don’t get beat,” said Fox. However, he stressed that losing once does not have to be the end of a line for a candidate. Instead, it can serve as a valuable learning experience.

“That was your first swing. Now, you know what being a candidate is,” he explained. “Spend the next two years not making the mistakes that you made the first time around, and you got a real good shot of winning.”

There is already speculation that Cisneros’ near loss in Texas may have set her up to defeat Cuellar in 2022, along the lines of Marie Newman’s second-try victory over Dan Lipinski this year.

Others saw this outcome as a shot across the bow of the Democratic Congressional Campaign Committee (DCCC).

Not only did it back Lipinski over Newman, but the DCCC also announced a head-line policy whereby any vendor supporting a primary challenger such as Newman would be ineligible to conduct business with the DCCC.

“Marie Newman’s race was the first race where the DCCC put their foot down,” Simpson said. “They were blacklisting any vendors who were working for challengers of Democratic candidates. That really motivated progressives.”

The Revolution Will Not Be Televised

According to the New York Times, the pandemic has given the TV ratings for the four major broadcast networks — ABC, Fox, NBC, and CBS — a major boost.

Evening news shows are bringing in some of their largest audiences ever. As of mid-March, an average of 32 million Americans watched the evening news, up 42 percent from the same period last year.

“Every single one of us is glued to the news right now. That’s already fertile ground for campaigns trying to get out their message,” said Peter Seat, vice president of the Bose Public Affairs Group, a government affairs and strategic communications firm.

Those candidates who have the money to afford expensive television advertising tend to come from the establishment, not the insurgent wing of the Democratic Party.

But others don’t see the issue as being cut and dried.

Using limited resources on less-expensive digital advertising may have more of a public impact than blanketing the television airwaves, Simpson explained.

It may be impossible to predict the overall impact of the pandemic on these highly contested primary races. Indeed, some preliminary polls have suggested that at least two of the three primary challengers mentioned above could run competitive races against the incumbents.

The impact could vary from race to race. Or it may favor the candidates adept at using certain media over others. Whatever the final outcome, the current health crisis has unquestionably jarred these upcoming contests.

“For candidates that can shift from a traditional, in-person, type of canvassing, to using digital tools, I think they are really going to benefit in the end,” Simpson said.