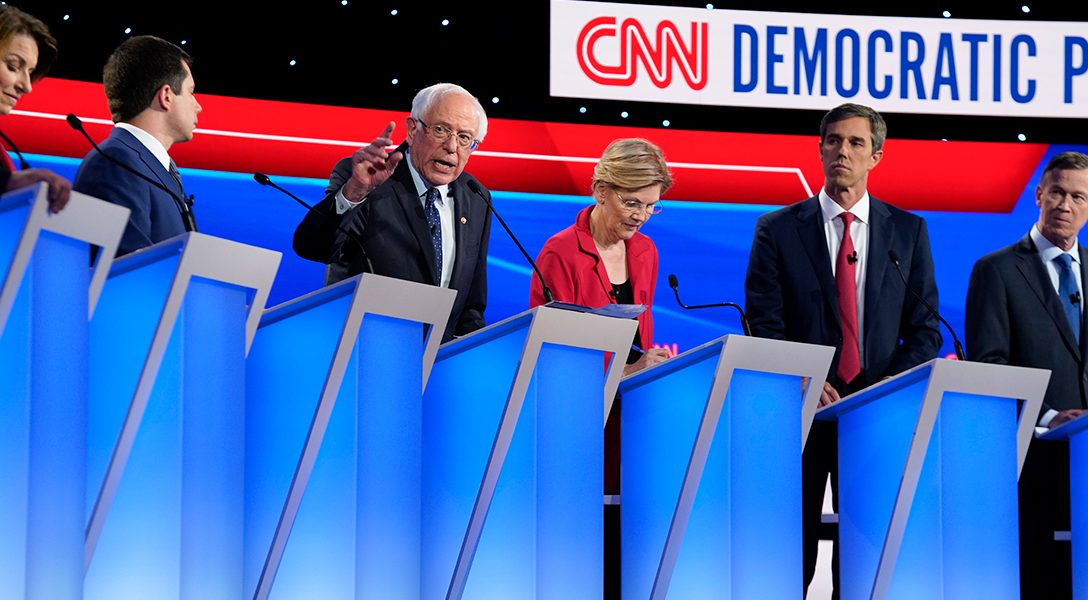 Election integrity experts are urging Democratic candidates to force a conversation about voting rights and securing future elections from foreign interference. They worry that neglecting this vital issue on a national stage could significantly distort the outcome of the 2020 election.

One key area of concern is that a foreign power could once again attempt to steer voters toward a specific candidate, as Russia did in 2016 with Donald Trump.

Although Trump remains in denial about having received assistance from Russia, Vladimir Putin’s regime likely targeted voters in every state in the 2016 election, according to a recent Senate Intelligence Committee report. Yet Senate Majority Leader Mitch McConnell (R-KY) has blocked multiple efforts to pass legislation that would upgrade outdated voting machines and require voter-marked paper ballots in 2020.

None of the moderators of the four televised debates asked the candidates about the Senate Intelligence Committee’s report on Russian interference in 2016, or Mueller’s testimony to the House Judiciary and Intelligence committees.

Maxim Thorne, managing director of the Andrew Goodman Foundation, told WhoWhatWhy that not talking about election integrity on a national stage with millions of Americans tuned in was “a serious mistake” and “a missed opportunity on so many levels.”

“I think it emboldens the bad behavior that threatens our democracy and the 2020 election,” Thorne said.

And yet the Senate GOP refuses to take up legislation that would protect our elections. Their OWN investigation found persistent and continual attacks against election systems. WHY then is this not priority #1 a mere 6 months out from primary voting?https://t.co/eN9YSHkh8M

“I think people are concerned about our democracy, if they know about it,” Thorne added. “It’s kind of surprising to me, and disappointing, that this wonderful opportunity to educate millions of Americans about the state of our democracy, and what’s at stake here, wasn’t taken advantage of by anybody.”

Sen. Michael Bennet (D-CO) did address partisan gerrymandering once during the first primary debates hosted by MSNBC in June. Bennet talked about the Supreme Court’s landmark decision, handed down that very morning, which held that gerrymandering for political advantage, as opposed to racial exclusion, was beyond the reach of the Court. Bennet argued that this ruling, along with the 2013 Shelby v. Holder decision that eviscerated the Voting Rights Act, was an example of “structural problems that we have to overcome with a broad coalition.”

Thorne noted that it was surprising not to hear Sen. Elizabeth Warren (D-MA) tout her election reform plan on the debate stage. Before the June debates, Warren had unveiled the most comprehensive proposal of any of her competitors in the Democratic race — a proposal that addresses many of the issues election integrity activists have focused on.

“It makes no sense to me strategically how you would not be talking about ensuring that people know across the country about these dangers, and your plan to remedy them, and that you’ve actually secured a path for young people to vote,” he said.

Wendy R. Weiser, who directs the democracy program at the Brennan Center for Justice, told WhoWhatWhy that she was deeply concerned that no moderator asked about election security, and that no candidate pushed for a conversation on the subject outside of their opening or closing remarks.

“Even though the Supreme Court decisions [on partisan gerrymandering and the Census citizenship question] had just come down, even though Bob Mueller just testified, even though HR 1 has just passed, even though we are hearing every day that Russia and other foreign adversaries are, at this very moment, seeking to manipulate our election and prevent people from participating in voting, I do feel like that was a disservice to the candidates and the American people as well,” Weiser said.

We've had 4 nights of debate over the last two months but questions about voter suppression, gerrymandering, and the census have yet to be asked. #Demdebate https://t.co/lqD3aEKIal

Most of the candidates have gone on record to support election reform legislation, and there is a bipartisan consensus in Congress to address vulnerabilities in the election infrastructure, despite long-standing opposition to national standards on voting among Republican leadership in Washington.

“If Mitch McConnell wanted to let this happen, it would happen. I think that the real attention and focus needs to be on him and letting this move forward,” Weiser said.

No Mention of Voting Rights in the Debates

“My fear is that every day that we delay, we are making the job of securing our elections harder,” Weiser said.

The ACLU timed how long candidates spoke about various issues during the CNN Democratic presidential primary debates last week and clocked in zero minutes spent on voting rights, and excluded from all four debates was the issue of voter disenfranchisement.

Adriel Cepeda Derieux, a staff attorney with the Voting Rights Project at the American Civil Liberties Union (ACLU), said that the lack of debate on voting rights in the first set of debates did not go unnoticed.

“Unfortunately, it often doesn’t lend itself for a quick explanation or soundbite on why it’s so crucial and so important to make some of these reforms and ensure access fully,” Cepeda Derieux said, adding that the absence of debate on voting rights was particularly surprising, he added.

There are, however, concrete steps that the candidates could be supporting and discussing in order to shore up the US election systems, he said.

Since the Shelby v. Holder decision, which made it easier for states with a history of racism to change its election laws, a swath of states around the country have passed voter ID laws and rolled back early voting hours, Cepeda Derieux said. In Missouri, for example, a voter ID law enacted in 2016 is in the process of being implemented before the 2020 election.

“In this election, finding a fix for the Voting Rights Act should be a priority and something presidential candidates can certainly take a leading role in,” Cepeda Derieux said.

The Andrew Goodman Foundation published a report last week that found an increase in voter turnout when voters have enhanced access to the polls and the option to vote in person or by mail is available.

Nearly 60,000 voters cast their ballots at early voting locations on Florida’s college campuses during the 2018 midterm elections, but a new law requiring “sufficient non-permitted parking to accommodate the anticipated amount of voters” could limit the number of universities that host an early voting polling place in 2020.

Floridians passed Amendment 4 as a ballot initiative in 2018, restoring voting rights for more than one million former felons once they have completed their sentences. Although seen as a victory for voting-rights activists, the state legislature soon after passed SB 7066, legislation that requires those individuals to pay restitution, fines, and fees before their voting rights are restored.

If SB 7066 remains in effect and, if upheld in the courts before the 2020 election, the outcome could be impacted “significantly,” Thorne said.

In Michigan and Wisconsin, the margins of victory for Trump in the 2016 election were 11,780 and 27,000 votes, respectively. Considering the number of young people and students that were turned away from the polls because of student ID and residency laws, as well as restrictions on which campuses of the University of Michigan and the University of Wisconsin could host early voting, Thorne argued the results of those states’ elections might have been reversed.

“It seems to be in the vested interest of both parties, but certainly the one that was debating the last few nights, to be talking about the impact that it would have on their own elections,” Thorne said. “For people who care about the country, they talk about biological health in terms of our healthcare. There’s also the health of our democracy.”

There’s one big hole in the discussions about election security. The two parties are interested in getting every advantage they can. The Russians, on the other hand, don’t care who wins. They want to lead us into mistrusting the results of our elections, which will lead to mistrusting our whole political system. Both parties are downplaying the problem for their own short-term gain, but they’re weakening our country in the long term.

I would argue that the biggest threat to our elections come not from foreign agents, but the two parties that control the elections. There is a reason they don’t want to allocate funds to the states to upgrade voting machines. The older machines are easier to calibrate and change votes and many do not have the paper back up ballots that come with new voting systems. All one has to do is look at the rampant fraud in the primaries back in 2015. We all know what happened in Georgia. In New York thousands were illegally removed from the voting rolls by a state an official. In California millions were given provisional ballots instead of being told to ask for no party preference ballots that the newly registered voters needed. Voting machines were broken and the answer was, once again, provisional ballots. In Chicago the Board of elections was sued over the fraud in the audit. People should check their voter registration before registration deadlines and always ask for a paper ballot and check it after you are finished voting. Candidates have to make sure they have exit polls.

They’re not worried about election security because none of them has to worry about becoming President.

I would suspect that to discuss voting rights would open the door to a discussion of voter id requirements which, in the US, is always associated with racism. Those in favor of ids are accused of being racists and those opposed are accused of allowing illegal voters. However, in Belgium where I live part time, (retired US citizen), Belgians not only must carry a government issued identity card (necessary to access any governmental services including health care) but are required by law to vote and are subject to fines for failing to do so. They really don’t understand the uproar about id cards. So, in America the whole set of issues is swept under the rug and ignored, until it is politically advantageous to scream about it.

Agree, and yet this past Sunday on Part 3 of the NBC Universal 4-part documentary American Swamp (aired on MSNBC) Martin Luther King III discussed the notion of putting one’s photo on their Social Security card for a federal ID, and that is something increasingly becoming palatable to the American public, perhaps especially the younger end of the Millennial generation. Admittedly, I was surprised to see King touting this, but there is also a WaPo Op-Ed from him back in 2017 on the idea. Perhaps times are changing. Seems to me the social security card w/ a picture as an ID for voting is a novel (low cost) approach.