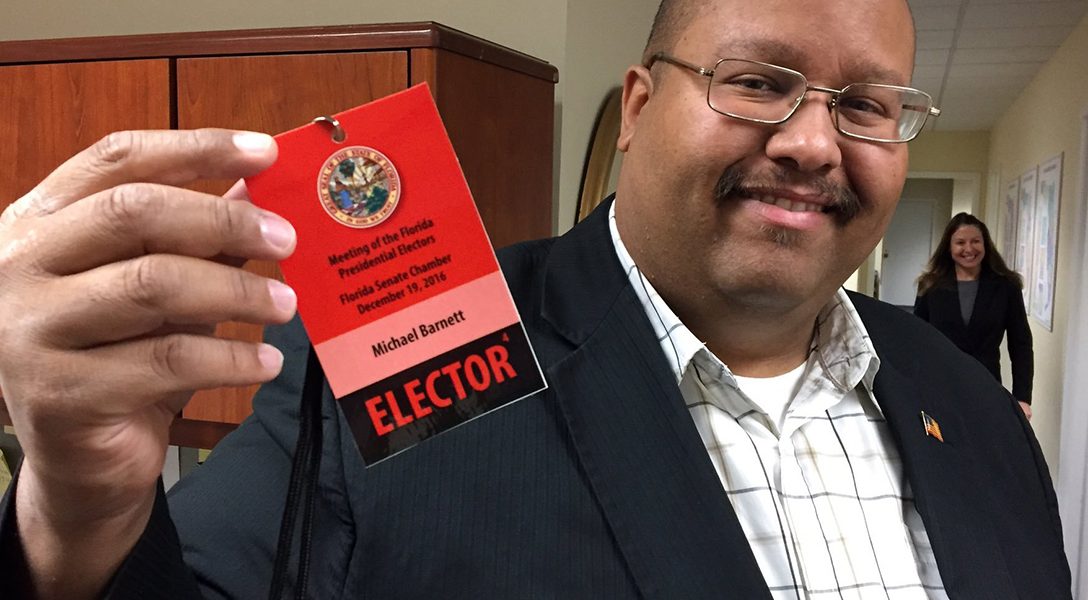 Palm Beach County GOP Chairman Michael Barnett displays his credential as one of 29 Florida electoral college electors before voting for Donald Trump on December 19, 2016 in Tallahassee. The National Popular Vote Interstate Compact would require electors in states where it passes to vote for the winner of the national popular vote. Photo credit: © The Palm Beach Post via ZUMA Wire
Elections

When George W. Bush kicked off his White House run in 1999, his team promised then-State Sen. Ray Haynes (R-CA) that he would campaign in California. By September 2000, the campaign thanked him and other Republicans in the state for their support, but decided to invest their resources in the powerful battleground state of Florida.

Soon after, Haynes passed by a booth at a legislative function touting the “national popular vote” movement — which wants the president to be chosen by a simple majority of votes cast around the country. As a member of the California state assembly, Haynes had previously given a floor speech against a national popular vote. But after learning more about it, Haynes said he “was wrong about the facts.”

Currently, presidents win by amassing 270 votes in the Electoral College, a body created by the US Constitution that gives a certain number of “electors” to each state. Normally, the candidate who wins the popular vote in a state gains all the electoral college votes for that state. For that reason, presidential campaigns concentrate on “swing states” — where the popular vote is in play — and ignore those states where the electorate is predominantly Democratic or Republican.

In 2016, nearly 94 percent of President Donald Trump’s campaign events were held in the 12 states where his support was between 43 and 51 percent. Two-thirds of his events were in just six states.

Trump was the fifth president in American history — and the second in less than 20 years — to win his election without winning the popular vote. Hillary Clinton received about three million more votes nationwide than Trump.

Changing the rules so that the national popular vote determines the winner in the 2020 election will be difficult, Haynes acknowledged. But he believes it could be done by 2024.

The movement to reform how Americans choose the next president, however, will need to overcome conflicting court rulings that will likely have to be sorted out by the US Supreme Court.

The 10th Circuit Court of Appeals ruled last week that nullifying and replacing the votes of so-called “faithless electors” is unconstitutional.

This decision leaves an unanswered question heading into the 2020 election: who gets to choose the next president and vice president? During the 2016 election, Micheal Baca and Robert Nemanich were a part of the self-dubbed “Hamilton electors.” Their goal was to prevent the election of then-candidate Trump by using their electoral college votes to vote for a different Republican, despite the fact that Colorado state law requires presidential electors to vote for whichever candidate wins the statewide popular vote.

Baca, who supported Sen. Bernie Sanders (I-VT) in the Democratic primary race, was the only person to go through with the plan to write in another candidate: former Gov. John Kasich (R-OH) rather than the statewide winner, former Secretary of State Hillary Clinton (D).

A three-judge panel of the 10th Circuit ruled 2–1 in Baca’s case, however, that removing a presidential elector for failing to vote based on state law was unconstitutional.

Judge Carolyn B. McHugh, an Obama appointee, and Jerome A. Holmes, a George W. Bush appointee, wrote in the majority opinion that “there is nothing in the federal Constitution that allows the state to remove that elector or to nullify his votes … And the state does not possess countervailing authority to remove an elector and to cancel his vote in response to the exercise of that Constitutional right.”

Judge Mary Beck Briscoe, a Clinton appointee, argued in the minority opinion that Baca’s case was moot because no damages could be awarded to him. Jason Harrow, who represented Baca, told the Los Angeles Times that he will appeal the ruling to the Supreme Court because the Washington State Supreme Court ruled in May that presidential electors must obey state requirements for casting their Electoral College votes.

The “faithless electors” in the 2016 election were among 167 presidential electors that have cast  write-in votes since the founding of the Electoral College. Because seven presidential electors cast votes for candidates other than Clinton or Trump, the final count was Trump 304, Clinton 227, Others 7, rather than the expected outcome of Trump 306 to Clinton 232.

Since 2006, the nonprofit National Popular Vote organization (NPV) has been a leading advocate for the National Popular Vote Interstate Compact (NPVIC), which would give a state’s electoral college votes to whichever candidate won the nationwide popular vote. So far, 16 states with 196 Electoral College votes have passed the bill. It will go into effect once the bill is passed by states with an additional 74 Electoral College votes.

The compact has long been supported by members of Congress like Rep. Jamie Raskin (D-MD). As a member of the Maryland State Senate in 2007, the first measure then–State Sen. Raskin introduced was a bill that made Maryland the first state to pass the NPVIC.

“I’ve been very troubled about the Electoral College and the way it has been working for a long time,” Raskin said.

The Electoral College was designed as a deliberative institution, and the practical core of it, Raskin explained, is that an elector cannot be forced by criminal or civil law to vote against his or her wishes. The way states have gone around that, he added, is by candidates appointing electors that will likely support them. It’s just one reason, Raskin said, that the “antiquated and obsolete” system should be changed.

“We spend millions of dollars every year exporting American ideas about democracy and voting all over the world, and the one thing nobody ever adopts from us is the Electoral College,” Raskin said.

Although confident the compact will be passed by more states before the 2024 presidential election, Raskin said that it may be too late for states to pass the NPVIC before 2020.

‘It’s Better for the Republic’

According to Article 2 of the Constitution: “Each State shall appoint, in such Manner as the Legislature thereof may direct, a Number of Electors.”

This means, according to Haynes, that state legislatures retain the authority to decide how their presidential electors vote when the Electoral College votes. Efforts to pass the NPVIC will continue, Haynes emphasized, because the 10th Circuit’s ruling has “absolutely no impact” on it and will eventually head to the Supreme Court.

The former California state senator, and NPV’s national spokesperson, told WhoWhatWhy that the 10th Circuit Court of Appeals was wrong on how they interpreted the Constitution.

A Small Minority in 10 States Will Elect the Next President

“What does the word ‘manner’ mean? It means that [the states] get to impose conditions,” Haynes said. “In this particular case … I don’t understand how they came to that conclusion.”

The NPVIC’s state-based approach would “[retain] the power of the states to control how the President is elected, retains state control of elections, and retains the Electoral College,” according to NPV’s website.

Most of the Democratic candidates for president have called for the replacement of the Electoral College with a national popular vote. Massachusetts Sen. Elizabeth Warren; former Texas Congressman Beto O’Rourke; and South Bend, Indiana, Mayor Pete Buttigieg have announced their support for the NPVIC.

Few Republicans have echoed their calls, arguing the compact would give a handful of states the most say in presidential elections. Haynes, however, argued that Republicans would benefit just as much as Democrats under the NPVIC.

“[The NPVIC] doesn’t eliminate the Electoral College at all,” Haynes said. He explained that James Madison, author of Federalist No. 45, opposed a winner-take-all system because it did not allow minorities in one state to reach out to other minorities in another state to have their voices heard in a presidential election. The problem with a winner-take-all system, he added, is that nearly 40 states have a law that makes Ohio and Florida the most important states in an election.

“Battleground states choose the president,” said Haynes. “There’s only six to 12 battleground states in any election, and that means that all the rest of us are bystanders. We’re the audience of the football game that’s going on.”