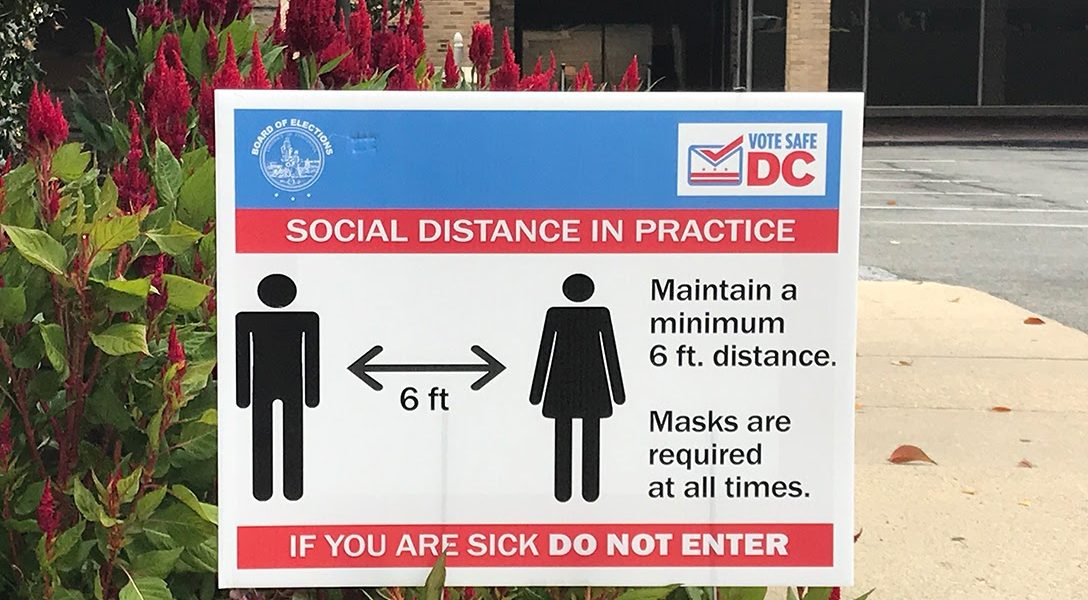 Washington Residents Head to the Polls for Early Voting

Washington’s Omni Shoreham Hotel has welcomed incoming presidents for inaugural balls for nearly 100 years. After a quick conversion, the luxury hotel has now opened its doors as one of the District of Columbia’s six election supercenters.

On the first day of voting, black ropes lined a path to the ballroom, and stickers, carefully placed six feet apart through the lobby, ensured proper social distancing. A half-dozen election workers sat behind plexiglass windows, ready to welcome voters. When this reporter entered the ballroom at around 9 a.m., just one other voter stood alone in a sea of empty booths.

In fact, a little more than 30 voters had waited in line before the polls opened. They had already voted and left before this reporter arrived. Other voters trickled in throughout much of the day. That said, the average wait time for in-person voting in the district ranged from five minutes to nearly two hours. Other supercenters, like the Capital One arena — home to the NBA’s Washington Wizards and NHL’s Capitals — and Nationals Park, reported similarly short wait times, but managed to handle a much larger turnout.

More than 500,000 Washington residents requested an absentee ballot this year, according to the US Elections Project. By Monday, the Board of Elections reported that it had received nearly 150,000 ballots, a majority of which were turned in at drop boxes. Warda Abbas, who had come to the hotel to support a local candidate and wore a campaign t-shirt for Marcus Goodwin (I), who is running for the D.C. Council, said that she had decided to vote by mail this year, but she nevertheless thought that the supercenters made voting “very convenient.”

“Any vote is your voice being heard,” Abbas said, adding that many voters whom she spoke with also voted by mail.

District resident Debbie Goldman, who decided to vote in person this year, and had already undergone training by the North Carolina State Board of Elections on how to monitor vote counting, said she thought that the expansion of voting by mail is “terrific.” She added that claims about widespread voter fraud by mail are unfounded.

Not everyone was that confident. Brandi Bohannon, who decided to vote early and in person,  cited an issue with absentee ballots at a Florida airport as her reason for not taking any chances. In 2018, she explained, a “suspicious package” had been discovered at the Fort Lauderdale airport. The container was labeled a “provisional ballot box” on the outside, but investigators determined that the box contained “election supplies [and] blank provisional ballots.”

Sharon Gang, a political communications consultant, spent the morning outside of the Omni Shoreham to show support for political newcomer and D.C. Council candidate Ed Lazere. Gang said that she had deposited her absentee ballot in a drop box this year. Voting by mail can be trusted, she said, but she acknowledged that not all voters feel the same way.

“Some people really want to vote in person,” Gang said.

This year, Washington voters also had to decide a ballot measure — namely whether to decriminalize entheogenic plants and fungi, better known as psychedelic plants and mushrooms. Pamela Wexler, an attorney who has lived in the district for more than 30 years, considered the initiative a matter of “preserving democracy.”

Since the coronavirus pandemic hindered signature gathering efforts for ballot measures, Wexler said that she spent months phone banking and gathering enough signatures to get the measure, known as Initiative 81, on the ballot. The D.C. Council allowed petitioners to gather signatures electronically in order to reach the 25,000 signatures needed.

One concern, Wexler said, is that Mayor Muriel Bowser (D) reportedly believes that the ballot measure is an effort organized by “outside groups.”

The last time voters in the district approved a ballot measure was in 2018, to replace the tipped-wage exemption for minimum wage workers, led by the New York-based nonprofit Restaurant Opportunities Center. The D.C. Council repealed the initiative before it was set to go into effect.

The effort to pass Initiative 81 has been led by Melissa Lavasani, a native Washingtonian and district government employee. Wexler pushed back on the notion that this initiative was backed by outside groups.