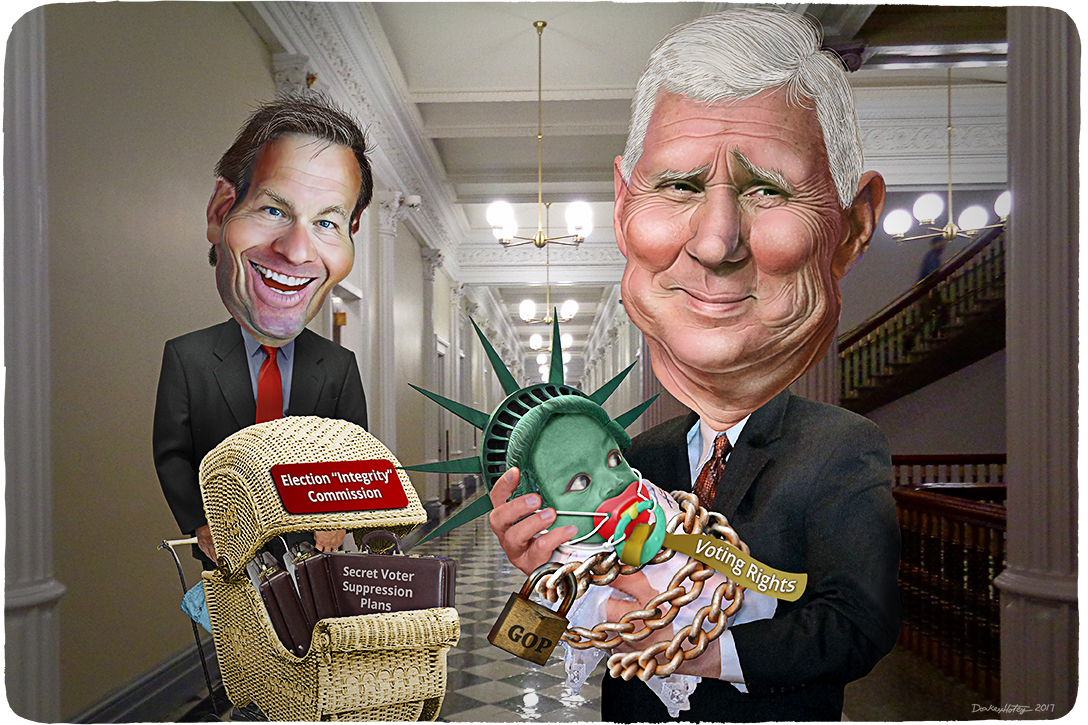 Republicans often deride government as ineffective. There is one way, however, in which they have gotten it to work just as they intended: The GOP’s voter suppression effort is a well-oiled machine and it will likely be cranked up in even more states before the next election.

If it hadn’t been for President Donald Trump’s FBI debacle, it is very likely that election fraud and voter integrity would have been featured prominently in the news this week because the commander-in-chief signed an Executive Order creating an “Advisory Commission on Election Integrity.”

On its face, that sounds like a good idea. The problem is that this commission will likely not look into the many, very real, election integrity problems that plague the US and have been documented extensively by WhoWhatWhy.

“We already know that millions of people did not vote illegally in the last election. Period. The real problem is that too few eligible people are registered to vote and turning out on Election Day — not too many.”

Instead, it is probably going to spend a good bit of time trying to find evidence for Trump’s completely unsubstantiated claim that millions of illegal votes were cast last November — every single one for his rival Hillary Clinton.

A major red flag to the purpose of the commission is that Kansas Secretary of State Kris Kobach has been appointed as its co-chair. WhoWhatWhy readers will recognize the name. Kobach is a main architect of voter suppression efforts throughout the country. (For the horrifying details, please go here, here, and here.)

Election integrity advocates are worried that the commission will be used to justify further laws designed to keep minorities and other Democratic constituencies away from the ballot box.

“This commission begins with zero credibility and should be recognized for what it is: a highly partisan and deeply cynical diversion premised on justifying the President’s past lies about illegal voting,” said Brenda Wright, Vice President for Policy and Legal Strategies at the public policy organization Demos.

“We already know that millions of people did not vote illegally in the last election. Period. The real problem is that too few eligible people are registered to vote and turning out on Election Day — not too many.”

The ACLU called Kobach “Public Enemy #1” with regard to voter suppression.

Unfortunately, a new study by Civis Analytics and Priorities USA shows that voter suppression works. Turnout increased in states in which no new Voter ID laws were passed, while it shrank in states that instituted strict legislation on that front. This effect was particularly pronounced in districts with a large African American population.

After all, if somebody commits a felony and gets five years in the slammer for trying to cast an illegal vote, shouldn’t the penalty for preventing a legal vote be just as harsh?

So, instead of having a commission, chaired by a known vote suppressor — trying to validate something Trump made up out of thin air — what should actually be done?

First of all, there should be a Constitutional Amendment guaranteeing the right to vote as explicitly as, for example, the Second Amendment protects the right to bear arms. Hopefully, that would prevent GOP-led states from passing laws that restrict access to the ballot box. It is unlikely that Congress will do this, so corresponding language should be placed on the ballot in all 50 states.

In addition, a second set of laws should be passed. There is no dispute that in-person voter fraud (or other types of voter fraud) should be punished severely. And the penalties in these rare cases are quite harsh. Voter fraud in a federal election carries a prison sentence of up to five years and a $10,000 fine.

But the exact same penalty should apply to anybody denying an eligible voter the opportunity to cast a ballot in any way, shape or form.

After all, if somebody commits a felony and gets five years in the slammer for trying to cast an illegal vote, shouldn’t the penalty for preventing a legal vote be just as harsh?

So, if you intimidate a voter, or give him/her misleading information on when and where to vote, you get up to five years. And let’s go further. If you lobby for a law that would disenfranchise voters and is later deemed illegal, you should also face five years in jail.

And finally, the same penalty should apply to state and federal lawmakers or other officials if there is evidence that they passed a law or instituted a measure that knowingly denied a certain group of people the right to vote.

We think that would put a quick stop to all of these voter suppression laws. And people like Kris Kobach should only be rigging votes on the selection of cell block spokesmen.