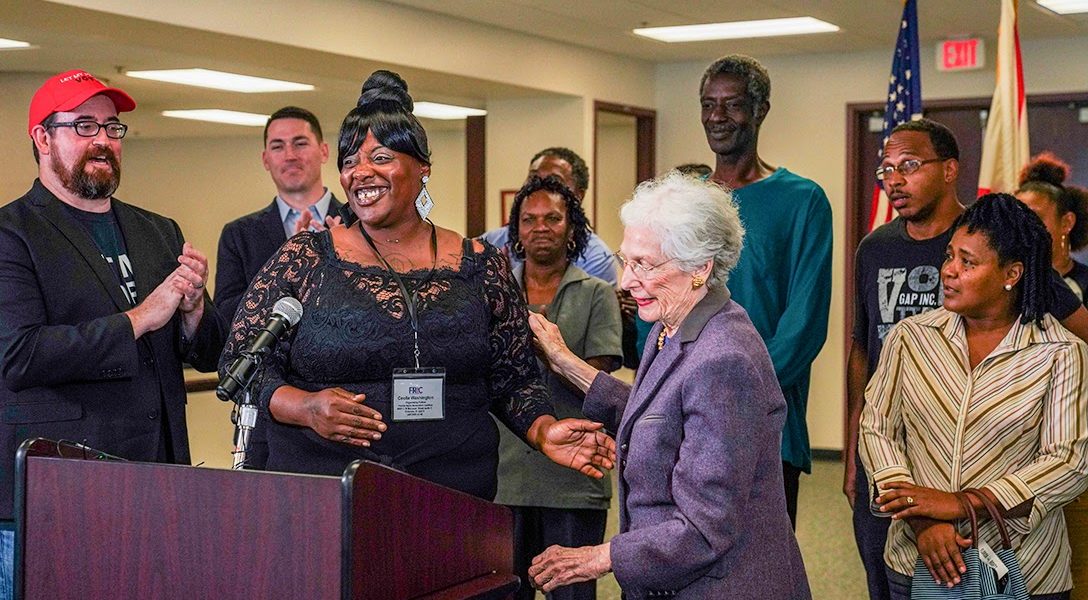 When Florida resident Angel Sanchez was finally able to vote at age 36, it was one of the happiest days of his life. But just a few months after regaining that right — or so he thought — the convicted felon learned he’d have to pay for it.

In a ruling that could affect Florida’s statewide elections November 3, including the presidential race in this battleground state, a federal appeals court ruled Friday that Florida former felons could only vote after they had repaid the state all fines connected to their imprisonment.

The ruling upheld a state law that Sanchez and other felons — even those convicted of small and petty crimes — must pay all costs, fines, court, and legal fees before their right to vote is actually restored. That feat is virtually impossible for most of Florida’s ex-felons.

Amendment 4, passed by Florida residents in 2018, restored the right to vote for Sanchez and 1.4 million other people with past felony convictions — as long as they completed “all terms” of their sentence. The amendment was one of the nation’s most expansive and inclusive voter enfranchisement actions approved during the past 50 years. It passed by a 65 percent margin, restoring voting rights to almost all those who had served prison terms for felonies — save for murder and felony sexual offense.

However, Florida’s GOP-controlled legislature proposed changes near the end of the 2019 legislative session. Republican Gov. Ron DeSantis signed Senate Bill 7066, which defined the completion of “all terms” to include full payment of any court-ordered restitution to victims of the crime, along with all outstanding court and legal fees.

Civil rights groups, including the ACLU, the Campaign Legal Center, the NAACP Legal Defense Fund, the Brennan Center for Justice, and the Florida NAACP challenged the measure, claiming it amounted to an unconstitutional poll tax. After a trial, a federal judge agreed, ruling in May that the bill effectively created “a tax by any other name.”

That ruling was put on hold by an appeals court, and the US Supreme Court refused in June to overturn the stay. On September 11, the 11th US Circuit Court of Appeals upheld the law by a 6-4 margin, saying plaintiffs failed to prove a violation of the Constitution.

“Florida maintains the position that they have no responsibility to calculate how much felons owe, which is preposterous. People need to be able to determine how to stay on the right side of the law in order for the law to be valid.”

Sanchez is in many ways a model citizen — but a felony conviction from when he was 16 has barred him from key constitutional rights, including the right to vote, according to an ACLU amicus brief. Prior to 2018, people convicted of felonies in Florida, like Sanchez, were subject to lifetime disenfranchisement.

Before seeking to regain the right to vote, Sanchez had already paid his way through community college, graduated from the University of Central Florida and the University of Miami Law School, and spent countless hours giving back to his community, through advocacy work for wrongfully convicted prisoners and tutoring inmates at Dade Correctional Institution.

But he can’t afford to vote. And he’s not alone.

An estimated 774,000 former convicts in Florida are disenfranchised because of money they still owe in order to “complete” their felony sentences.

“A couple months ago, hundreds of thousands of more people were going to bed at night thinking they could vote than there are today, and that’s wrong,” says Neil Volz, deputy director of the Florida Rights Restoration Coalition.

Beyond upholding Florida’s law, the appeals court ruling could affect the results of statewide elections November 3, including the presidential contest.

The reason is that about 44 percent of the ex-convicts in Florida affected by the ruling are Black. Because studies have shown that 90 percent of new Black voters will vote for Democrats, the continued barriers to voting probably help Republican candidates.

Despite completing his prison term and paying more than $4,000 to resolve his court-ordered obligations, Sanchez still believes he may not be able to vote.

When Sanchez was first charged at the age of 16, he was ordered to pay $1,698 in fees. Though Sanchez has since proved that he finished paying off his legal financial obligations in 2014, paying a total of $2,309 over three years, he still has an incorrect outstanding balance on his file at the Miami-Dade Clerk of Court’s Office as a result of complications and miscommunication between the various agencies that handled his costs. Because of this, Sanchez will not vote again for fear that he will be charged with fraudulent voting, even though he has satisfied all the necessary criteria.

Many other would-be voters face similar challenges when trying to decide if they are eligible to register or vote. Florida lacks a centralized database for ex-convicts to reliably verify outstanding fines and fees, and the outstanding costs can vary from agency to agency.

Doug Bakke, the chief operating officer for courts in Hillsborough County, which includes Tampa, said that this is especially a problem for older convictions, roughly those from 2013 extending back to 2000 and earlier. The records for those cases have transitioned through multiple system conversions, meaning that the court itself has to verify the records from many different sources, including microfilms, microfiches, and in some cases, even index cards in file boxes.

“You can’t just wait for the state to find out for you, because there’s a risk involved with that,” Danahy said. “People are certainly intimidated even if they are in fact eligible just because the burden to prove that is so onerous.”

Julie Ebenstein, a senior staff attorney with ACLU’s Voting Rights Project who worked on the lawsuit against the bill, compares the situation to having a minimum age for voting — but not telling voters what it is.

“Florida maintains the position that they have no responsibility to calculate how much felons owe, which is preposterous,” she said. “People need to be able to determine how to stay on the right side of the law in order for the law to be valid.”

During the political and legal battles, the Florida Rights Restoration Coalition (FRRC) launched its “Fines and Fees” program, working with court clerks such as Pat Frank of Hillsborough County to determine, and repay, the financial obligations of former convicts. Other groups have also jumped in, including the League of Women Voters of Florida, which has partnered with the FRRC to provide pro bono lawyers to help individual ex-convicts.

In some states, obligations by ex-felons can be paid with a legal agreement, or civil lien, subtracting regular payments from their paychecks so that their rights are restored while they pay. In Florida, former convicts making use of civil liens are still barred from voting.

“The legislature is Republican controlled and they don’t like the majority of people to vote. They rely upon a select electorate that is more favorable to their philosophy, so any time that they can dissuade some people from voting, that’s to the advantage of the incumbent,” says Frank, who herself once served on the Florida legislature in the past as both a representative and a senator. “I think there was a political motive behind it and it’s very unconstitutional.”

Advocates and returning citizens, like Volz, say a favorable ruling would have been “one step in a much larger movement” to ensure that “returning citizens in the state of Florida can be fully integrated in the community and seen as fellow human beings in all aspects.”

“This ruling runs counter to the foundational principle that Americans do not have to pay to vote. The gravity of this decision cannot be overstated,” said Ebenstein in a statement. “It is an affront to the spirit of democracy.”

“We will continue to place people over politics,” said Desmond Meade, the executive director of the Florida Rights Restoration Coalition, in a statement following the ruling. “We will not rest until we live up to the promise of Amendment 4 and see every one of the 1.4 million returning citizens who want to be a part of our democracy have the opportunity to do so.”