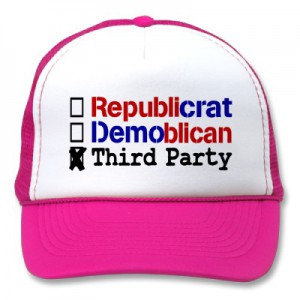 Unstacking the Deck: The Status Quo, Third Parties, and You As you watch the debates and notice how confusing the claims and counterclaims are, it is worth noting that the confusion often comes from two men struggling to claim the same spot on the ideological spectrum. Who wants to tax the middle class fairly? Who wants you to have the best possible health care? Who supports tough action against Iran? Why, both of them.

We have had times in this country when the differences between two nominees were openly asserted and clear to all. Think Richard Nixon and George McGovern, or Ronald Reagan and Walter Mondale. We no longer have that—perhaps because the two parties know not to nominate anyone with too distinctive a set of views.

Because of this dynamic, we have candidates accusing each other of misrepresenting where they stand, or each one claiming to be the true advocate of a popular position, rather than presenting different, competing ideas.

Another reason for the lack of meaningful choices is the absence of viable, visible third parties offering dramatically different approaches. Not that they’re not out there—it’s just that because of the way things are structured, plus a near-total media blackout, you may not even know about Rocky Anderson, Jill Stein, Gary Johnson, Virgil Goode, or a handful of others also seeking your vote.

Significantly, the two major parties have been able to co-opt the issues of third parties—a balanced budget, “green” policies, and so on—without necessarily doing a lot about them. By simply adopting the language and slogans of these smaller entities, the big guys keep the little guys marginalized. And by not actually instituting many of the promised reforms, the leading candidates mollify their establishment backers.

Both nominees must be all things to all people. They must convince you that their only concern is ordinary people—“grandmothers”, “the middle class”, “homeowners.” It’s no accident they keep on telling us the stories of regular folks they met, as if they could possibly expect to do something in those peoples’ interests, while simultaneously visiting and staying at the homes of major donor bundlers from big corporations, law firms, investment houses, and the like.

The problems with the American presidential election system are well known—and include the primary calendar, which gives disproportionate influence to small states, and the Electoral College, with candidates able to secure all of the electors from a state with as little as a one-vote plurality. The result is that candidates have to invest a huge effort in low-population states early on, and then pump massive resources into media buys to tip several close races, mostly in bigger states. If our presidential nomination and general election processes were different, we’d see more interesting candidates, and hear more interesting and diverse proposals.

It’s not just the presidential deck that’s stacked. Our Congress is elected based on the single-winner system, by district, rather than under proportional representation, i.e. a share of the total vote received by their party.  Thus, candidates who wish to win know they have to join one of the two major parties—and in some parts of the country, they know they must join the dominant one, or have no chance at all. Shades of joining “The Party” in the old USSR. Only if the rules of the game were changed to permit proportional representation would we begin to see fresh ideas gain serious attention. Let’s say the Libertarians, or Greens, or Labor, were to run candidates in a proportional system. They very likely would win at least a few seats, and thereby gain a platform from which to offer a much wider array of choices– for example, presenting the public with health insurance scenarios from an all-private system to an all-public one, and everything in between.

None of this is to minimize some very real differences between the current nominees, including probable Supreme Court appointments, and on gay marriage and women’s reproductive rights, as well as fundamental differences on views about the role of government.

But it’s never a bad idea to imagine a much better system, and how we might invite truly bold leadership and creative solutions.

Here are some places you can go for information on other ways we could be electing our leaders: