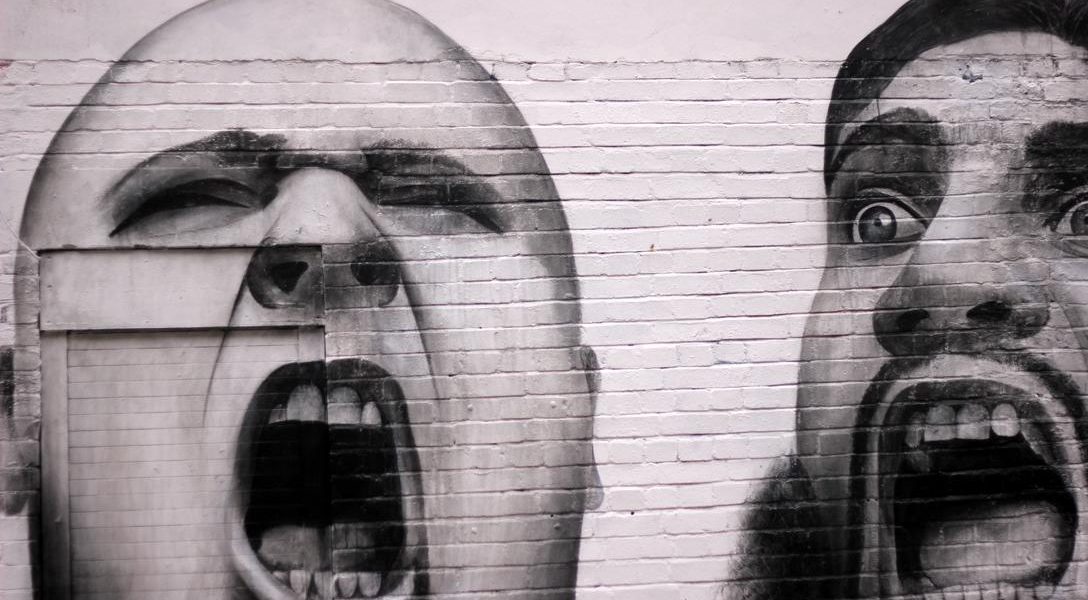 Early in September, Shaquandra Ratliff was killed in Chicago. The young mother was shot when a fight broke out at a “death remembrance party” for a gang member slain a year ago. But police say Ratliff had no gang affiliation and simply was at the wrong place at the wrong time. In other words, this is a story about yet another innocent black person shot to death.

A report on the killing was posted on Yahoo! News, the most popular news site in the United States. Yahoo! News allows people to comment on articles and/or to vote on comments. A total of 340 comments were made in response to this story. This is one of them:

bleeding to death on the ground. This typically indicates that the aggressive negotiations have

ended. They have traded rocks and spears for modern civilization’s 9mm.”

This particular comment received 60 “Up” votes and 5 “Down” votes. That means for every person who felt strong enough to give this comment a thumbs down, 12 others thought that referring to African- Americans as “farm equipment” was just the kind of thing they should approve of.

There is a lot of debate among political analysts on why exactly Donald Trump is leading the Republican presidential field. Instead of overthinking it, they should simply listen to the billionaire himself, who claims to be the leader of a new “silent majority” of Americans.

So who are these people and why is Trump so popular among them? A look at the polls will give the answer.

The website Real Clear Politics has a list of every national poll taken this election cycle. Prior to officially announcing that he was running for president, Trump never topped 5% and, in the last poll taken before he got in the race, his support had dropped to 2%. While the billionaire and TV star had the name recognition needed to do well in early polls, he clearly had not excited the Republican base.

The Moment That Changed the GOP Race

That all changed when he declared his candidacy and railed against immigrants.

It was by far the most reported part of his speech, and the Republican base paid attention. In the first poll conducted after Trump entered the race, his support had more than quintupled, propelling him to second place in the polls. Two weeks later, after doubling down on his anti-immigrant rhetoric, Trump was in first place, and he has not relinquished the lead since then.

It is difficult to identify outright bigotry in surveys. Nobody is going to admit to a pollster that he is a racist. However, the anonymity of the Internet allows people to show their true selves, and that is why I analyzed comments on articles that appeared on Yahoo! News that were related to race, religion, and immigration.

The site was chosen not only because it is the most popular online news source but also because it is a non-partisan news aggregation site. I also chose articles with a lot of feedback in order to work with a large sample size of comments.

A Reuters story about a Trump meeting with family members of people allegedly killed by of undocumented immigrants was published on July 11. The article quotes Jerry Guardado, a protester at the event, who said he wanted to let the billionaire know that immigrants “are not criminals and that we are hard-working people.”

One of the most popular comments on the Reuters report in part responded to what Guardado said:

“You, Mr. Guardado and all the other illegals in this country are parasites and we need to    eliminate all of you from our country and we are finally moving in that direction.”

Another Reuters article, on how immigration from Mexico is actually down, drew the following popular response, which got 108 Up votes and 9 Down votes:

“This article is BULL! These felons are still pouring over the border like cockroaches after maple syrup.”

While immigration stories often draw a strong response from commenters, that reaction pales in comparison to the reaction prompted by stories on race relations.

An Associated Press story on protests in Ferguson, MO, around the time of the one-year anniversary of the death of Michael Brown, drew well over 4,000 comments. Here is one of them:

“The problem is the fact that they are celebrating a street thugs death. He was killed because he       provoked the incident. Then they illegally demonstrate. Then to top it off two gangs have a

shootout. Then some resident makes reference that he can go to war in another country but he

can’t go to war in his own streets. Now that is the warped mentality of some of the people who

create most of the problems. Build a wall around Ferguson, remove all white people as well as

themselves. I am sick of their attitudes.”

An Associated Press article on a Justice Department report that found racial bias in Ferguson, and which has been covered by WhoWhatWhy, drew over 10,000 comments. The following got 1,000 Up votes and 168 Down votes:

“you are NOT victims anymore

you are the bad guys now

you have your hand out for more free loot

you won’t take responsibility for yourself

you have a 74% illegitimacy rate

you take and just want more

you don’t think the laws should apply to you

you blame others for your own decisions

you don’t try in school

you don’t try at work

you have no concept of personal responsibility

you can’t imagine how hard it is to make it in the world, because you never try

you think you can have quality of life without earning it

you don’t raise your children with any morality

you celebrate violence and misogyny

you think you are owed something, when you’re not

At this point you are not victims of the bad guys,

you ARE the bad guys.”

For example, an Associated Press story on the family of Freddie Gray settling with the city of Baltimore for $6.4 million drew over 10,000 comments, of which this was among the most popular ones (800 Up, 51 Down):

“The kid wasn’t worth two cents but his family has no problem using his dead body to get rich. I’d

be willing to bet it all be gone in six months.”

Donald Trump is not the only Republican candidate tapping into this vein of anger. Ben Carson, who is currently running second to Trump among GOP primary candidates, was widely criticized for saying that he “absolutely would not agree” with putting a Muslim in the White House.

That condemnation, however, is not reflected in online comments. An Associated Press article on the issue drew over 20,000 comments in less than a week. The one with the most Up votes (1,300 as opposed to 546 Down votes) was this one:

“Well we have different views. Muslims sould [sic] not be president in a Christain [sic] Nation. I didn’t vote for Obama for that reason. If you see something call it as it is. A cat is a cat. OBAMA is muslim .”

What It All Means

This analysis is not meant to indicate that the sentiments expressed and the support they received are representative of the US as a whole.

What’s clear, however, is that a large number of Americans feel so strongly about certain issues that they are moved to express their views in public forums or to vote their approval of such views — something only a tiny minority of readers usually do.

For whatever reason, a not insignificant portion of the US electorate feels that illegal immigrants take jobs away from Americans and that a lot of them are criminals. They see the mainstream media’s wall-to-wall coverage of white cops shooting African-Americans but feel that not enough is being done to cover black-on-black crime. And they are afraid of terrorists and believe that violent Islam is the biggest threat to the security of the United States. They are part of a long American tradition of alarm about the “other.”

These are the sentiments Trump and Carson are stirring up and benefiting from.

The billionaire’s promise to “Make America Great Again” resonates with the mostly white Republican base that sees the demographics of the country shifting. Clearly threatened by these changes, this segment of the population wants the US to return to a time when whites constituted an absolute majority, who could do as they pleased.

Some comments even show a degree of demographic self-awareness, as, for example, in this response to the shooting of Shaquandra Ratliff, the young mother killed in Chicago:

“Yes, these comments sound completely insensitive, racists [sic] and hateful. But they are really just backlash by whites for constantly being hatefully blamed for everything that is wrong with large parts of the black community that is failing miserably to better themselves.”

Needless to say, this comment received 10 Up votes for every Down vote.

If members of this demographic confine their frustration, fear, or rage to expressions of disdain for minorities online and to voting for Trump or Carson in the GOP primary, the real effect of their anger will be relatively small. However, there is a chance that a volatile mix is being created as these candidates, together with the conservative media outlets backing them, keep stirring the pot. At some point, if this demographic continues to feel as though they (and their concerns) are not being taken seriously, this stew of frustration and anger could increasingly spill over from Internet forums into the real world.