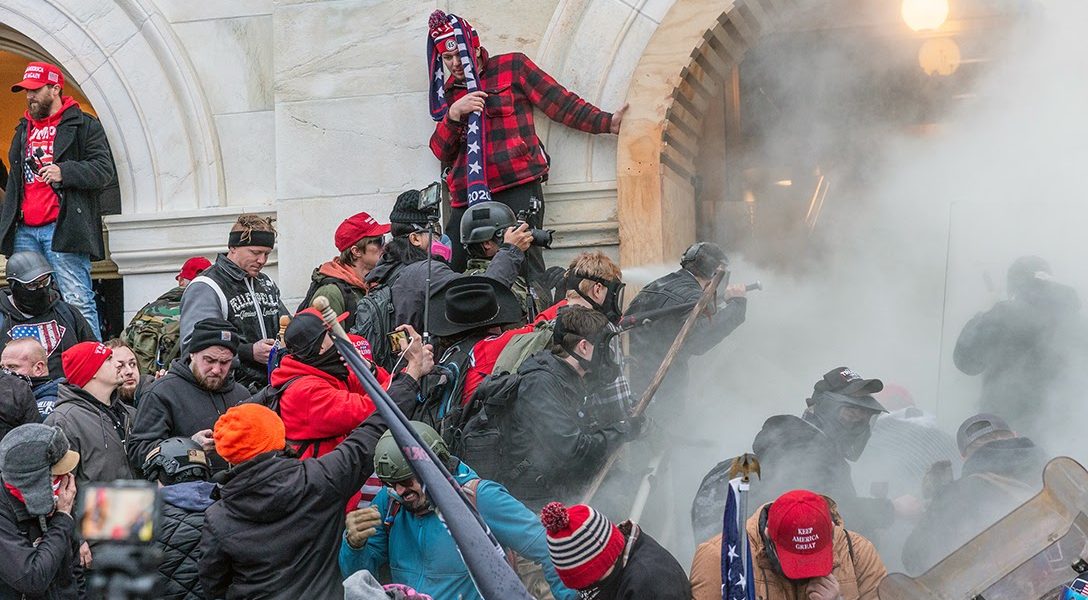 UPDATE, January 8, 2021: In a statement to WhoWhatWhy, DLive said it suspended three accounts, banned two accounts from live streaming, forced offline five channels, and permanently removed over 100 past broadcasts from their platform following the Capitol breach.

“Our team and community members have been actively screening across our platform for any content that has violated our Terms of Service and Community Guidelines on or about January 6th,” the statement said.

January 7, 2021: The Trump-inspired riot on Capitol Hill could be just the beginning, with more violence on the way potentially targeting various state legislatures, according to experts who track far-right extremist groups.

“Because of the trajectory that we’re seeing in terms of the intensification of the violence leading up to today, all signs indicate right now that, absent significant intervention, the level of violence will continue to increase,” Devin Burghart, executive director of the Institute for Research & Education on Human Rights, an organization that analyzes right-wing movements, said on Wednesday.

In a press conference on Thursday, District of Columbia Mayor Muriel Bowser said she is concerned about what might happen on Inauguration Day, January 20, and on the days leading up to it. More so-called “Stop the Steal” protests are planned for this weekend amid fears they could turn violent.

“If there isn’t some level of accountability for the protesters who did these heinous acts, if there is not a widespread, unanimous condemnation of this kind of activity without hesitation or without pause, then it will be seen as a green light by far-right activists to move forward,” Burghart told WhoWhatWhy.

But far from condemning the mob’s violence, President Trump tweeted a short video Wednesday afternoon reiterating his baseless election fraud claims — the very rhetoric that has emboldened his supporters to rebel against the electoral process — while telling the rioters, “We love you. You’re very special.”

Within the melting pot of self-proclaimed militia groups, white supremacists, and die-hard Trump supporters that descended on Capitol Hill, there were those who have been eager to initiate what they’re calling a second civil war.

I asked these guys if civil war was what they wanted. “Yes” they replied pic.twitter.com/BLopvJP6Ik

“That kind of stuff has real implications and real consequence because it means that the gloves are off and that there are no more rules,” Burghart said, “and when that happens, that’s the kind of signal that folks on the far right, from the Proud Boys and other militias to neo-Nazi accelerationists, are looking for to try to kick things off.”

In the days leading up to Wednesday’s planned rally, talks about violence were ramping up on popular right-wing online forums and social media platforms such as Parler, according to the Anti-Defamation League (ADL), an anti-hate organization. In a thread about Congress on “TheDonald.win” forum, one user wrote, “Please, I dare them to defy the constitution while millions of patriots are anxiously waiting to hang them and gun them down in the streets like the tyrants they are,” the ADL reported.

Trump fan and white supremacist Nick Fuentes also hinted at killing members of state legislatures during a live stream Tuesday night — earning $2,800 through supporter donations for the stunt. “What can you and I do to state legislators, besides kill them?” he asked. “Although, I’m not advising that, but I mean, what else are you going to do?”

This stream took place on DLive, which the Southern Poverty Law Center describes as an extremist-friendly fringe platform. Originally catered to gamers, the live video streaming service has attracted a large community of right-wing personalities, most of whom have been banned from more mainstream platforms like YouTube and Twitch.

White nationalist and neo-Nazi online personality Baked Alaska, whose real name is Tim Gionet, actually profited from Wednesday’s insurrection, livestreaming his illegal break-in at the Capitol, including vandalizing House Speaker Nancy Pelosi’s office, on DLive. Through donations from viewers — via cryptocurrency referred to as Lemons — Gionet made roughly $2,175 from his 20-minute video that was watched by close to 16,000 viewers, according to far-right extremism researcher Megan Squire. One Lemon is worth $0.012 US dollars.

“I think that DLive, in particular, needs to be held accountable for not only providing these folks a platform to commit these acts of violence in violation of their terms of service but also helping them to monetize,” Burghart argued. “They’re literally making money by committing these acts of domestic terror.” The platform prohibits its users from livestreaming illegal acts. DLive did not immediately respond to WhoWhatWhy’s request for an interview.

Holocaust denier Nick Fuentes and neo-nazi loser Baked Alaska both live-streamed from Pelosi's office after storming the capitol. Neither have been arrested. pic.twitter.com/HEAQQKQgp0

While some are calling for Gionet to be arrested, authorities have not done so yet.

Washington police said they’re using photos and surveillance tapes to try to identify numerous people of interest. Bowser called on the Joint Terrorism Task Force, which is led by the FBI and the Department of Justice, to “investigate, arrest and prosecute any individual who entered the Capitol, destroyed property, or incited the acts of domestic terrorism” that took place Wednesday. She also called for the president to be held accountable.

Misdemeanors carry fines and up to one year in prison. The felony counts listed carry maximum prison terms of 10 years.

Prosecutors might also consider more serious charges like federal terrorism, according to Carissa Byrne Hessick, a criminal law professor at the University of North Carolina at Chapel Hill, especially if anyone is found to have connections to the two pipebombs found inside the Capitol.

“These are perilous times, and people should be paying close attention to what’s going on because it’s a situation that is very likely to get worse before it gets better,” Burghart warned.