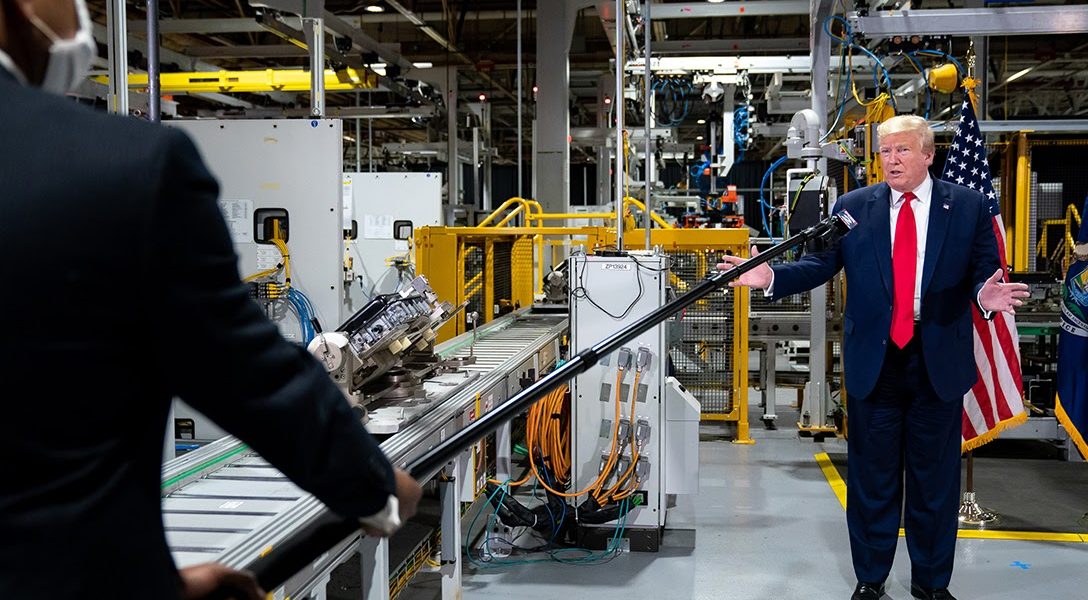 Grappling with more than 50,000 coronavirus infections and nearly 5,000 deaths, Michigan officials last week encouraged voters to vote by mail in November. They mailed an absentee ballot application to each of the state’s 7.7 million registered voters.

That did not sit well with President Donald Trump, who threatened to withhold federal funds in retaliation.

“We’re not going to [be] voting by mail,” Trump said during a roundtable at the Ford Rawsonville Plant in Ypsilanti, MI, last Thursday. “Voting by mail is wrought with fraud and abuse, and people don’t get their ballots that happen to live in a certain district.”

However, Michigan’s 2018 ballot initiative that allows any voter to cast an absentee ballot passed overwhelmingly. The state’s Democratic Attorney General Dana Nessel also warned Trump that voters “will remember” if he withholds any funds because of officials’ decision to mail absentee ballot applications.

“Now is not the time for political games,” Democratic Secretary of State Jocelyn Benson tweeted last Friday. “Voting by mail is a right in Michigan, [and] I’ll fight every day to ensure that every single registered voter knows how to exercise that right.”

Marge Baker, executive vice president for policy and program with the progressive advocacy group People for the American Way, argued that Trump’s threat to withhold funds is “potentially illegal.”

“Trump’s outburst over vote-by-mail options … is more forewarning that he will stop at nothing to corrupt the presidential election,” Baker said, adding that “this is clearly a partisan attack on states led by Democratic governors.”

Former Vice President Joe Biden also condemned the president for his comments, telling the Detroit Free Press that “[in] the wake of disaster, Donald Trump once again showed us who he is — threatening to pull federal funding and encouraging division.”

Notably, Republican National Committee Chair Ronna McDaniel told reporters that she saw no issue with mailing voters an absentee ballot application. But the President appears to see it differently — at least for himself.

“If you’re President of the United States, and if you vote in Florida and you can’t be there, then you should be able to send in a ballot,” Trump said.

A number of other states are rethinking their approach to the November election because of the coronavirus pandemic. Election officials from both political parties have expanded access to absentee voting to encourage less in-person voting and mitigate the risk of spreading the virus at polling places. Officials are hoping to avoid what happened during Wisconsin’s presidential primary in April, where researchers now say dozens of coronavirus cases could be tied to in-person voting.

Despite these warnings from election security and public health experts, Trump has repeatedly railed against absentee voting. Earlier this year, Trump told Fox News that states should not expand access to absentee voting because then Republican candidates would never win an election again. Yet, a number of Republican secretaries of state have done the same thing as Democratic officials in Michigan and Nevada — including Georgia’s Brad Raffensperger and Washington’s Kim Wyman.

When he isn’t defaming voting by mail, the president continues to make other unsubstantiated assertions about voter fraud.

While in Michigan last week, the President repeated his claim that voters should present an ID when they cast a ballot in person because “you know, you go out and buy things, you have your picture.” Voter ID requirements have been struck down by a number of courts because these requirements have been proven to be a tool for disenfranchising minority and low-income voters.

Nor have Trump’s allegations of widespread voter fraud in the 2018 Florida gubernatorial and US Senate races been proven true.

After a 17-month probe, Florida Investigators announced last week that they found no evidence of widespread voter fraud in Florida in the 2018 midterm elections.

They did discover that one election supervisor in a heavily favored Republican district may have broken the law by accepting and counting about a dozen ballots. These were not ballots delivered by the US Postal Service. They were sent by email.