In a recent campaign video, Kim Crockett, the Republican nominee for Minnesota secretary of state, focuses on a ballot drop box to cast doubt on their security — and question the need for them in the first place.

Crockett is one of dozens of 2020 election deniers nationwide currently running for statewide offices where they would be responsible for overseeing elections. With a handful of exceptions, they are Republicans closely aligned with former President Donald Trump, who has repeatedly claimed the 2020 election was stolen.

Crockett faces incumbent Democrat Steve Simon in what is shaping up to be a surprisingly competitive race. She trailed Simon by only 4 points in a recent poll.

The “drop box” video opens with Crockett standing in front of the Law Enforcement Center in Two Harbors in Lake County, located between the northern shore of Lake Superior and the Canadian border. “I have some good news, and some bad news,” she says.

She applauds Lake County for “bringing election judges together, Democrats and Republicans to work together on the ballot board.” Then, placing her arm over a  ballot drop box in front of the center, she drops the bad news.

“Lake County has kept its ballot box, its drop box for absentee ballots,” she says. “I just don’t know why they would have them here or why Minnesota has them at all.”

Crockett reads a sign instructing voters to use the box to return only their own ballot and call a number if they’re dropping off someone else’s. She questions whether people can be trusted to follow the rules — and, noting that a security camera monitors the box, asks whether anyone is even watching.

She ends the video after again asking why ballot drop boxes exist in Minnesota.

Ballot drop boxes are a bad idea. Video surveillance means nothing if the law doesn't require live monitoring of them 24/7.https://t.co/33jwaZDIxN pic.twitter.com/AoumhtlsHj

Long Track Record and Many Advantages

Ballot drop boxes have been used in the US for many years. They have been shown to modestly increase voter turnout and they have other advantages.

A voter does not have to risk the chance that a mail-in ballot will not be received by the required date, an especially important consideration for voters concerned by the Postal Service’s spotty performance in 2020.

In rural areas where voters must travel long distances from their homes to the nearest polling place — such as Lake County — drop boxes can be used by the voter at their convenience.

And as was demonstrated during the COVID-19 pandemic, when cases spiked in areas with in-person voting, drop boxes allow citizens to vote in a medically safe and secure manner.

Drop boxes are also more secure than postal boxes because they are generally built more solidly and they are usually, as Crockett acknowledges, under video surveillance to thwart stuffing or tampering.

Yet, perhaps because they increase turnout, drop boxes have become a frequent target of Crockett and other 2020 election deniers.

Minnesota’s 80 percent turnout of eligible voters in 2020 was the highest in the country. Whether that is cause for celebration, however, is in the eye of the beholder.

As higher turnout is perceived to advantage Democratic candidates, it predictably inspires — in lawmakers and candidates like Crockett — proposals to restrict if not outright ban, as in neighboring Wisconsin, such enfranchising conveniences as drop boxes.

The unsupported allegation that drop boxes facilitate massive “voter fraud” has been most notoriously promoted in the widely viewed — and thoroughly debunked — 2022 Dinesh D’Souza documentary 2000 Mules, which seems to have given impetus to Crockett’s attack. 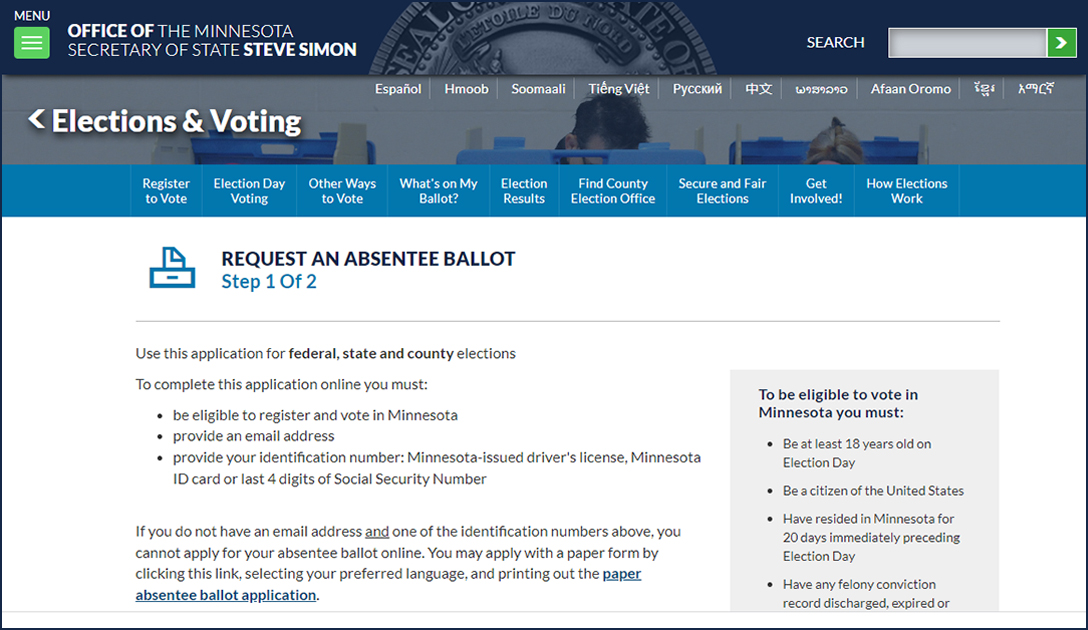 Crockett’s complaint about drop boxes is consistent with some of her other stances regarding election integrity. On her campaign website, she also advocates for mandatory photo ID for all voters, a proof-of-citizenship requirement to vote, reducing the number of mail-in balloting precincts, and a reduction in the 46-day early-voting period in Minnesota.

All of these policies would likely result in lower voter turnout.

With Crockett and in nine other states with election deniers running to oversee state elections — including key swing states like Michigan, Arizona, and Nevada — voters will have the option of voting for officeholders whose principal agenda appears to be to make it more difficult for many of them to vote. 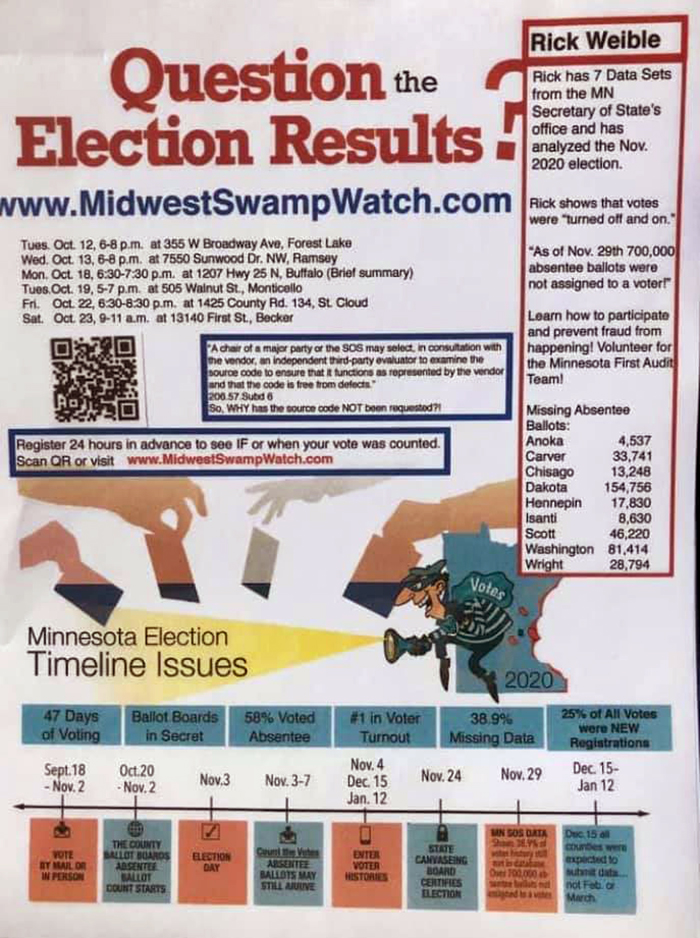 A political neophyte who worked as an attorney and as a policy analyst at right-wing think tanks that advocate for pet conservative issues like “school choice” and banning critical race theory, Crockett is no stranger to controversy. She describes the 2020 election as “rigged” and “illegitimate” and “our 9/11.”

She has also called on voters to exercise “biblical citizenship,” a theory that suggests the Constitution and the Bible are intertwined and that America was founded on Christian values.

Critics call this idea part of the bedrock for the far-right “Christian nationalism” that inspired the January 6, 2021, storming of the US Capitol.

Crockett also opposes the John Lewis Voting Rights Advancement Act, which would have restored the power of the federal government to prevent discrimination against voters of color.

In a statement to CNN, the Crockett campaign defended calling the election rigged but declined to address any of her other assertions.

“There are so many important policy issues we should be discussing right now so that Minnesotans can make an informed choice when they vote,” she complained. “Instead, most of the media is intent on character assassination.”

A Breakdown in Trust

Crockett’s allegations persist in the face of numerous recounts and audits in multiple states that failed to provide a dram of evidentiary support that the 2020 election was suspect.

The Department of Homeland Security declared the 2020 election “the most secure” in American history, saying there was no evidence votes were compromised.

Challenges asserting otherwise have been greeted by near-universal rejection by courts at every level, including in cases presided over by Trump-appointed judges.

However, given legitimate security threats posed by barcode voting machines, touch screens, and wireless modems, politicians like Crockett will continue to have fertile ground to question the security of US elections.

And Americans’ faith in the integrity of elections has plummeted since January 2021, with a majority now questioning the process — a fact Crockett has seized upon.

If this many people lacked confidence in the security of our banking system, there would be a run on the banks!

Star Tribune poll this morning on the SOS race shows FAR TOO MANY MINNESOTANS ARE NOT CONFIDENT IN OUR ELECTIONS. pic.twitter.com/LQ4R1yOexj

In response to the breakdown in trust, lawmakers and election officials might move to fortify the voting and counting processes with transparency measures, such as rigorous precertification audits. Others, like Crockett, instead seem intent on stoking fears of voter fraud and making it harder and harder to vote.

Crockett’s Trump-echoing remarks about election integrity raise many questions among potential voters. Whether they are gaining traction is a question voters will have the chance to answer in November.