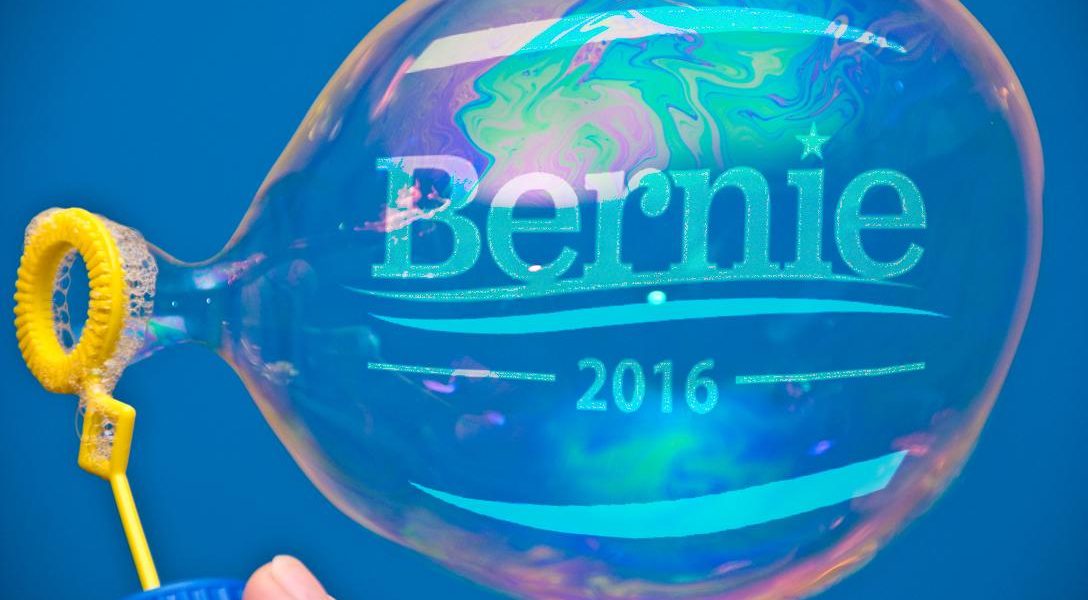 Bernie Sanders is blowing up, but is his bubble bound to burst? Photo credit: Adapted from a photo by Sergey Galyonkin / Flickr
Elections

There is a good chance that even Bernie Sanders himself is wondering why he is doing so well in the polls right now and why he managed to raise $15 million in the second quarter of the year.

The “Bernie surge” can be partly explained by the long-thwarted desire of progressive Democrats for a real champion … a mantle that the self-proclaimed socialist has donned with great gusto. (It’s important to remember, however, that Sanders was by no means the first choice of the left wing of the Democratic Party; that honor would have gone to Massachusetts Sen. Elizabeth Warren, if she had entered the race.)

But there’s a second big factor behind Sanders’s surge that has to do with the media’s need for a competitive contest: Ad-sponsored websites make their money with clicks, and a boring race is not going to generate enough revenue-producing interest. While the battle for the GOP nomination is a total circus (including a veritable carnival barker as current front-runner), the Democratic primary promises to be an absolute snoozefest.

Naturally, the press has been trying to make it look like a contest and not a coronation.

So naturally, the press has been trying to make it look like a contest and not a coronation. While “advocacy news” aggregators like the Drudge Report (see WhoWhatWhy’s story on this) and the Huffington Post have been vigorously hyping Sanders, the major mainstream news outlets have done their part by not yet scrutinizing the Vermont senator.

It is telling that Hillary Clinton has not yet attacked Sanders – neither directly nor through surrogates. You can be sure that her team has a massive opposition research file on the senator. But for the moment there is no upside to going into battle mode. Part of Sanders’ appeal is that he is an underdog, and voters might not take kindly to an all-out assault on a rival whom Clinton still leads by 40% nationally and by a comfortable margin in Iowa.

Even if Sanders were to upset the former first lady in New Hampshire, where the race is tightest and he has the best chance of winning, he simply doesn’t have the kind of national operation and resources that would allow him to compete everywhere.

A New Hampshire poll that was released Tuesday night shows Sanders trailing Clinton by 6% in the Granite State, which makes the race there a statistical tie. It also served as further evidence for the dynamics at play.

The poll, which was not the first to show that the race in New Hampshire is a statistical dead heat, was featured prominently on the Drudge Report, Huffington Post and The New York Times.

If he does get within 20 points nationally, expect the media to turn a spotlight on Sanders and his record. At that point, progressives will find out that he is not the unblemished champion they imagine, especially in key areas like gun control, US military interventions, and immigration.

If Sanders does get within 20 points nationally, progressives will likely find out that he is not the unblemished champion they imagine.

With this in mind, the Clinton team seems determined to wait things out, on the assumption that Democrats won’t entrust the nomination to somebody who is not even a member of their party. Of course, Sanders, at 73, would also be the oldest major party candidate in 2016. Clinton, at 67, would be the second oldest. (Ronald Reagan was 69 when he was elected president.)  Sanders would also be the first Jewish nominee in history.

At the same time, one can almost feel sorry for Clinton. Her main declared opponent is largely getting a pass in the media while she is taking her lumps almost daily. Every single Republican is trying to score points by criticizing her (and completely ignoring Sanders). The House’s Select Committee on Benghazi, which was already serving as an anti-Hillary forum, has basically morphed into the House Committee on Finding Dirt on Hillary Clinton.

Still, Clinton is by far in the best position of any of her rivals. Despite the Bernie bubble and the possibility of Vice President Joe Biden throwing his hat into the ring, she can expect to be nominated fairly easily. This will allow her to save up a lot of the resources that she will need next fall, when the winner of an epically messy GOP primary is ready to turn his or her full attention to the final battle for the White House. And that’s when a “surge” in any direction can  get…really interesting.

PANORAMA CAPTION: Why has Hillary Clinton been silent so far about the increasing popularity of Bernie Sanders?