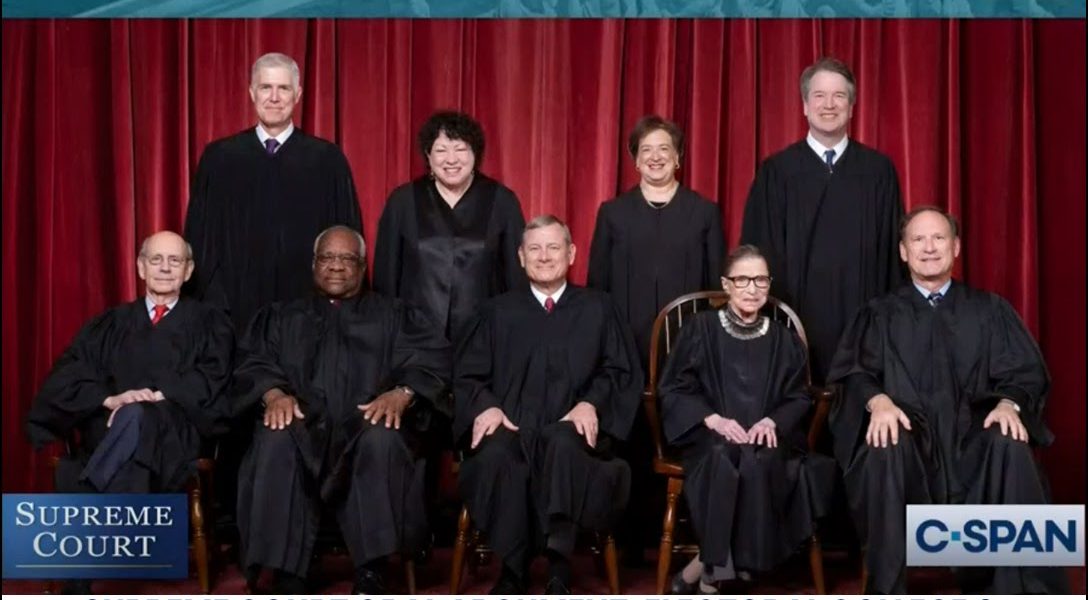 The Supreme Court heard oral argument in ‘Chiafalo v. Washington’ via teleconference due to the coronavirus pandemic. The case involves Washington electors, and whether they can cast a vote for a candidate who has not won the state’s presidential popular vote. Photo credit: C-SPAN
Criminal Justice Elections

Can the Electoral College be the last line of defense to protect the United States from a candidate who is unfit for office? That is the question the Supreme Court grappled with Wednesday.

At issue was the role of electors in the Electoral College, the archaic institution that ultimately chooses the US president. Throughout history, these representatives generally voted for the candidate supported by a majority of the voters in their states. In 2016, however, some of them refused to do so. These so-called faithless electors were the subject of the case the Supreme Court heard yesterday, and the ruling could have major implications on the outcome of the 2020 election.

As the elections of George W. Bush and Donald Trump have shown, in the US, you do not need a plurality of votes to become president as long as you win enough states to get a majority in the Electoral College. However, could the Electoral College decide to deny the presidency to a candidate they deem not up to the job or send the winner of the popular vote to the White House?

If enough electors deflect, the answer is: possibly.

Those who want to prevent such outcomes are seeking the right to remove these faithless electors before they ever get to vote, and the Supreme Court will have to decide whether states can replace electors if it appears they are not going to uphold statewide popular votes.

Attorneys for the faithless electors argued that they should be allowed to support the candidate of their choice like any other voter.

The specific case before the Supreme Court involves a total of seven faithless electors from Colorado and Washington state who violated their pledges and voted in 2016 for individuals other than the winners of the popular vote in their states. Electoral College voters typically sign a pledge to cast their ballots in accord with how their states vote, and states like Colorado and Washington have procedures in place to remove an elector who goes against the majority.

One of the electors’ attorneys, Lawrence Lessig, claimed the electors’ votes constitute an individual “moral obligation,” and electors may obey their conscience, whether or not it aligns with the preferences of their state. He added, “the state disappears” once an elector is appointed. A majority of justices challenged this notion, with Chief Justice John Roberts questioning whether voting “with discretion” meant that there would be no limits on what electors could do with their votes.

In response, the electors’ attorneys claimed electors could vote for whomever they want, so long as it is a person. Roberts interrupted that line of thought: “Not a giraffe? I mean, of course, they have to vote for a person.”

Lessig emphasized that electors cannot be replaced if they change their minds on how to vote within minutes before they are supposed to cast their ballots.

“There’s no power to remove prior to the vote,” Lessig argued. The Constitution only allows states to fill vacancies — not create them — and removing an Electoral College voter during an election for breaking a pledge could create chaos, Lessig said.

Justices Stephen Breyer and Samuel Alito didn’t accept Lessig’s claim that removing an elector would create “chaos,” and pressed Lessig on whether a state could replace an elector with an alternate if the elector were to move out of state before an election. They could, Lessig said, but that situation was not relevant in this case because that would mean the elector had not yet cast their vote — and his client had.

Justice Brett Kavanaugh raised concerns about the Supreme Court facilitating chaos if it should decide that states lack the authority to replace faithless electors. Roberts also asked whether a state could force an elector to sign a contract agreeing to vote for a victorious candidate and impose fines if the contract is broken. Attorneys for the electors said no, while Washington’s solicitor general, Noah Purcell, defended that state’s decision to impose fines and cited a number of past examples in which electors were removed after their appointments.

“It’s not just what commitment [you are] asking the electors to make, but what [you told] the public about their role,” Purcell said, adding that if the conditions for being an elector are constitutional, “then the condition can be enforced by removal.”

Lessig compared the Electoral College to a jury in his brief to the Supreme Court, arguing that a juror cannot be removed based on how he or she votes. Justice Sonia Sotomayor questioned how the comparison helped his case.

“A juror makes all sorts of pledges,” Sotomayor said. “Yet, if a juror is selected and violates one of those pledges — say the juror talks about the case with the other jury members — the judge is empowered to remove that juror.”

This case is likely the last the Supreme Court will hear before justices break for their summer recess, but not the only ruling to expect before they go that could impact the upcoming election. Earlier this week, the court heard oral arguments to determine whether President Donald Trump must release his tax returns. Results are expected in June.