Perhaps you saw The New York Times’s exposé on incoming Republican Congressman George Santos from the Empire State. He’s a total unknown who in November managed to flip one of a handful of House seats nationally in the fingernail-chewing battle for control of the House of Representatives.

And, as we shall see, there is less to the man than meets the eye.

I’d read up on Santos right after the election, and noted his consequential victory and a  historical first: Both the Republican and his Democratic opponent, Robert Zimmerman, whom he narrowly beat, are openly gay. It is the first time this has ever happened in the country.

It also didn’t happen where one might expect. New York’s 3rd Congressional District, one of the wealthiest in the country, runs along Long Island’s North Shore, includes a bit of Queens, leans conservative, and is graced with the Gatsby-esque old-money mansions of the “Gold Coast.” All this just a short distance from the Gomorrahs of Manhattan, Fire Island, and the Hamptons.

The “two gay guys in the suburbs duke it out” scenario is certainly a welcome milestone on the road to universal equality and opportunity. It’s also exactly the kind of thing political strategists are forever gaming, tweaking, and polling.

Take into account the likes of Herschel Walker… and it seems that “gay Republican” and “Black Republican” are on their way to becoming the new normal.

In politics, of course, every candidate hopes to appeal to as many demographics as possible, so Santos being an openly gay Republican was a good start, but even better if he had some additional cultural hues.

And indeed, he had one: He also claims to be a Jew, and Jewish voters are definitely an essential part of the winning political mix in the area. And here is where things in NY-3 stay interesting: Robert Zimmerman is Jewish too. So there!

(In Santos’s case, the claimed specifics are that on his mother’s side there is European Jewish blood, although Santos’s father is Catholic, and Santos has claimed that too!)

“Are we being played as extras in ‘The Talented Mr. Santos’?” asked one Republican leader.

Santos has apparently shifted his claims on just how much he loves Donald Trump, but he did eke out his victory as a new twist on a common Long Island subspecies: “patriotic,” “proud,” and, of course, perpetually aggrieved about whatever Fox News is pumping out at the moment.

On top of that, Santos told us he is the child of immigrants who made a lot of money in the new country — and managed to make even more himself, becoming a Wall Street financier and real estate tycoon, descriptions likely to play well in NY-3. All of which apparently proves both how great the American way of life is — and why we need to make sure that not too many other immigrants get to benefit from it.

Not just the child of immigrants, but Latino, kind of.

This was starting to sound like someone had thrown in a pinch of Alexandria Ocasio-Cortez for a richer blender mix.

And then there was his philanthropy: a nonprofit… helping animals.

That, then, was incoming Congressman George Santos — that is, until this week, when we learned from The New York Times that, far from being the sum of many parts, George Santos may be a man playing many parts.

The headline on that article read: “Who Is Rep.-Elect George Santos? His Résumé May Be Largely Fiction.”

When reporters began fact-checking his resumé, they had trouble nailing down a few specifics that should be easy.

Like the degrees he had supposedly earned. Baruch College doesn’t know the guy.

And the jobs he said he’d held. Goldman Sachs doesn’t know him either.

And the real estate empire. No sign of it.

Oh, and the family. He claimed his folks had immigrated and made it big in the US. But there was the matter of his mother having worked not too many years back as a maid in Brazil.

His charity? The IRS can’t find any record of Friends of Pets.

To be fair, it’s not like Santos wasn’t doing anything. He had his own version of a semester abroad:

In 2008, when Mr. Santos was 19, he stole the checkbook of a man his mother was caring for, according to Brazilian court records uncovered by The Times. Police and court records show that Mr. Santos used the checkbook to make fraudulent purchases, including a pair of shoes. Two years later, Mr. Santos confessed to the crime and was later charged.

Santos did not get back to the Times by their press time to answer or explain, but his attorney did manage to issue a Trumpian snarl for daring to raise questions:

“No surprise that Congressman-elect Santos has enemies at The New York Times who are attempting to smear his good name with these defamatory allegations.”

The moment I saw this story, I wondered aloud why nobody got the straight dope on this guy… before the election. A few hours later, Jane Mayer at The New Yorker tweeted the same thought.

By then, I was engaged in my favorite activity: tracking a case backwards.

It turned out that folks had tried to raise a red flag about Santos — but that the matter just got lost with other, bigger races competing for attention.

Plus, after all, this was Long Island.

Long Island has a kind of homey, cozy, happily bipartisan corruption to it. Tony Soprano might have been from there if he hadn’t been cast about an hour to the west, in New Jersey.

I got my start three decades ago as an intern for the Long Island-based newspaper Newsday, and later did investigative reporting about area corruption for the alternative weekly The Village Voice. Whew, was this great stuff for an enterprising newsroom gumshoe. Police corruption. Union corruption. Education corruption. Business corruption. And a hard-to-dislike, gleefully corrupt local political kingpin, Al D’Amato, who actually made it to and remained in the US Senate for many years.

Poking into Santos, Republican fraud, I quickly found an excellent article from back in September that prefigured the Times’s also excellent and different reporting — it is full of shocking material and was not credited by the Times in their piece.

The article was published by a local outlet, the North Shore Leader (“The Leading News Source for Long Island’s Gold Coast”). Here’s the lede:

Controversial US congressional candidate George Santos has finally filed his Personal Financial Disclosure Report on September 6th — 20 months late — and he is claiming an inexplicable rise in his alleged net worth to $11 million.

Two years ago, in 2020, Santos’ personal financial disclosures claimed that he had no assets over $5,000 — no bank accounts, no stock accounts, no real property.  A net worth barely above “zero.”

After totting up a litany of other suspicious things about Santos, it closes with:

“Are we being played as extras in ‘The Talented Mr. Santos’?” asked one Republican leader.

Impressed and wanting to know more about the author of that article, a woman named Maureen Daly, I looked around for more information, but the site had none.

So I went to other online sources.

Not only is she the Leader’s managing editor, she is also a political operative. According to her resumé, she worked recently on a variety of GOP campaigns, and even lists herself as director of the Ted Cruz Campaign HQ. She also served as campaign manager and assistant treasurer at Lally for Suffolk Legislature and treasurer for Lally for Congress.

All this might explain how the early hints that Santos was not to be trusted could be attributed to an unnamed local Republican leader. 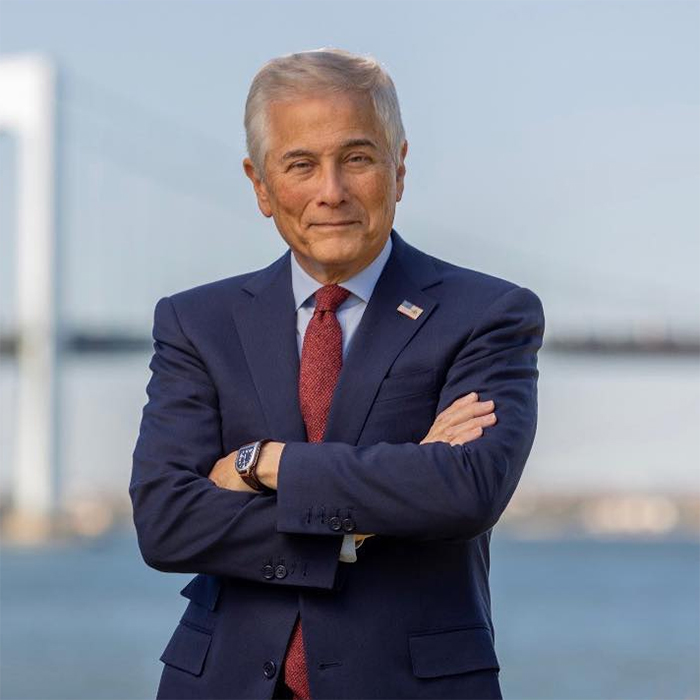 From there I turned to Santos’s Democratic opponent, Zimmerman, who has been quoted as saying that he raised red flags about Santos but was unable to get anyone’s attention at the time because of distractions elsewhere. (It would be interesting to know which members of the press considered these red flags unimportant.)

Those distractions included the surprisingly close governor’s race, where Democratic incumbent Kathy Hochul faced an unexpectedly fierce contest from Rep. Lee Zeldin, again from Long Island — whose biography proudly notes that he is one of just two Jewish Republicans in Congress.

Anyway, as I read up on Democrat Zimmerman, I ran across an article in the Rupert Murdoch-owned tabloid New York Post, in which Zimmerman was being called out for his own cross-party ties to Joe Cairo, the Republican chairman of Nassau County (which overlaps heavily with NY-3). Cairo is also the head of Nassau’s Off-Track Betting Corporation and a client of Zimmerman’s PR firm. (Someone with Cairo’s many connections might also be one possibility for the anonymous GOP official quoted in the Leader raising suspicions about Santos.)

As for the Post article, it was based in part on allegations by Zimmerman’s Democratic primary opponent, Nassau County legislator Joshua Lafazan, who called Zimmerman a “hypocrite” for being so close to Republicans.

The article fairly allowed Zimmerman to respond to Lafazan, and he did. Boy, did he respond:

Zimmerman, for his part, has attacked Lafazan for running in the past with backing from the Conservative Party and his campaign urged the Federal Elections Commission to probe whether Lafazan boosted his campaign coffers by funneling money there from a billionaire couple who covered at least $50,000 of his college tuition payments through a loan.

“From helping to fund the anti-abortion Conservative Party, to being widely criticized by the NAACP and LGBTQ groups for backing right-wing priorities, to refusing to come clean about whether he voted for Donald Trump in 2016 — there’s good reason why Democrats don’t trust Josh Lafazan,” said Zimmerman campaign spokesman Jason Kaplan. “That’s why Democratic leaders like Hillary Clinton, Rep. Grace Meng, and Rep. Greg Meeks all endorsed Robert Zimmerman.”

So perhaps you see the problem here. Even a guy like Santos, if that is his real name, -– even if most of everything he claimed about himself was made up — isn’t exactly sui generis in the Long Island political muck.

That muck — that’s something you can’t make up.

Meanwhile, this character is going to sit in Congress for the next two years, perhaps casting a deciding vote on the great issues of our time. And there may be nothing the conned voters can do about it.