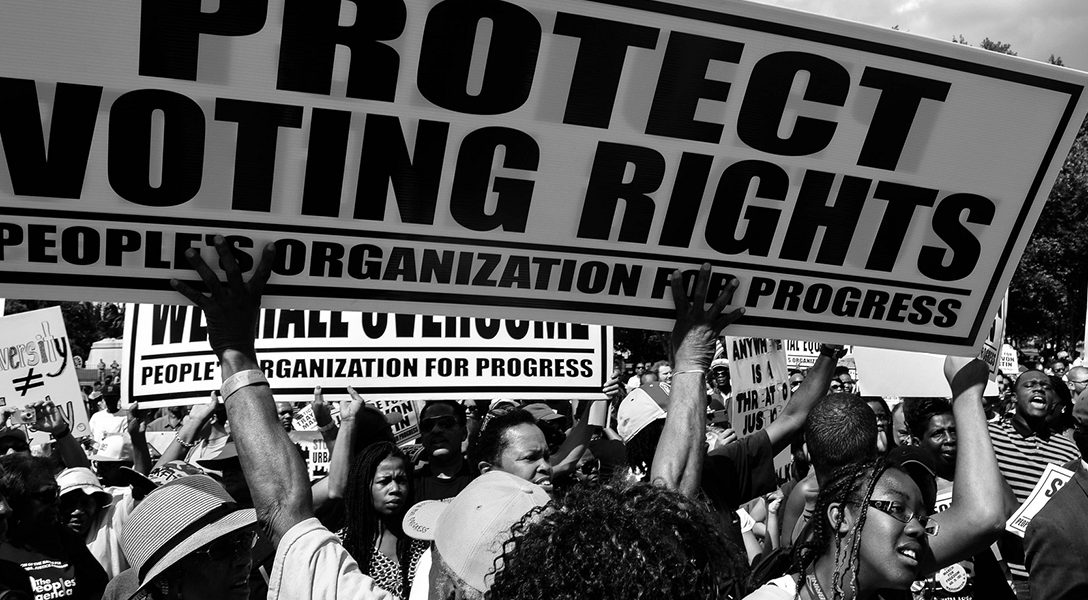 Hillary Clinton’s lead in the popular vote now exceeds two million. But she lost the Electoral College fair and square. Or did she?

Did a hideous and undemocratic effort to prevent some Americans from voting result in Donald Trump’s electoral college win? Does it explain, at least in part, how generally accurate polls could have been so wildly off?

That’s exactly what the evidence suggests. Yet almost no one in the media wants to talk about this.

As a result, we see yet another abdication by journalism.

This kind of thing should be of concern to all fair-minded people, irrespective of which candidate they preferred. Cheating — and that’s what it would have been — is profoundly un-American. And cheating will only justify more cheating. It will be a deadly cycle for democracy.

It’s unclear why the media is giving this issue short shrift. It’s certainly not as sexy as Donald Trump talking about sexually assaulting women or Hillary Clinton’s emails, but the real reason might be that the media allowed this to happen.

For years, Republican-controlled states have been doing all they can to ensure an electorate that is favorable to its candidates. In other words, they have tried to put in place measures that make it as difficult as legally possible for minorities to vote.

The laws they passed include the elimination of early voting opportunities that Democrats have traditionally taken advantage of (e.g. the elimination of Golden Week in Ohio and same-day registration in North Carolina), preventing ex-felons from voting (this affects more than 1.5 million people in Florida alone), closing hundreds of polling locations throughout the country (e.g. 403 in Texas and 212 in Arizona), new Voter ID rules (minorities are less likely to own the required IDs or to be able to obtain them), and voter purges across the country) in states like Wisconsin.

For example, the Crosscheck system applied in Republican states resulted in hundreds of thousands of potential voters being kicked off the rolls – often because their name is similar to that of another voter registered elsewhere.

Much of this was done under the guise of preventing in-person voter fraud, which is pretty much a non-existent crime. It is nearly impossible to tell how many voters stayed home because of new rules. The total number could be enormous. Yes, there is only anecdotal evidence of people being turned away at their polling station because they did not have the proper form of ID, but…

How many people never found the time to get it in the first place or lacked the documents needed?

How many families voted early following church on a Sunday but did not because that opportunity was eliminated?

How many low-income Americans didn’t vote because they had to work two jobs on Election Day and couldn’t afford to stand in a long line because polling stations had been closed?

How many children of illegal immigrants did not dare to show up because they were worried that their loved ones would get deported?

Courts stopped some of these undemocratic methods but many of them withstood review. In other words, Republicans found a way to legally accomplish the same thing both parties always accuse each other of: They rigged the election.

WhoWhatWhy covered many of these topics much more extensively than much larger media outlets. It must also be noted that the stories we ran did not turn out to be among our most popular articles. People were just too enamored of the more “fun” and less “dry” aspects of the campaign — the personalities and the “horse race.”

That’s very, very bad. We can point fingers in many directions. But more important than the blame is the simple fact: In a democracy, the government should make it as easy as possible for people to cast their votes.

This year, those who assail government were able to turn those they do not like — or with whom they do not agree — into second-class citizens.

The US seems to be the only western democracy to have these problems. Yet many solid solutions present themselves, including:automatic voter registration, uniform voting laws across the country, and making Election Day a holiday or always scheduling it for weekends. Let’s hear your ideas in the comments section below.