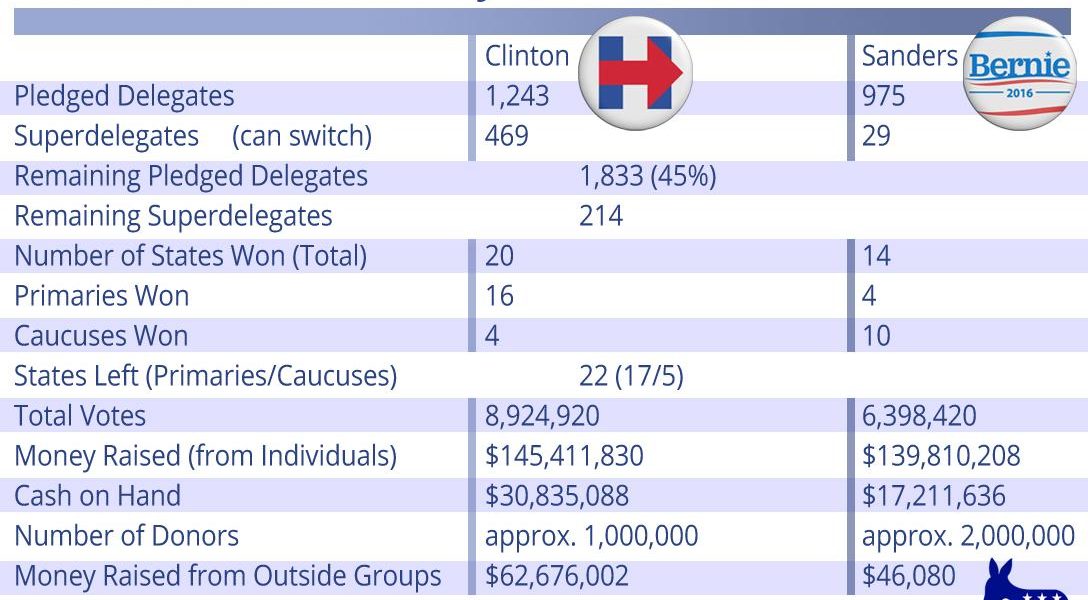 With Saturday’s caucuses in Washington, Hawaii and Alaska concluded, more than 50% of pledged Democratic delegates have now been awarded and that gives us an opportunity to examine the race at “halftime.”

This analysis will focus on pledged delegates and not factor in superdelegates. While Hillary Clinton has a 15:1 advantage over Bernie Sanders in this category, these delegates are free to switch their preference at any point prior to the convention. It is conceivable that many would do so if Sanders were to win more pledged delegates when the final primary ballots have been cast.

Clinton has built her lead in large part in southern states, where she routinely blew out her opponent. What works in Sanders’s favor is that the former secretary of State has run out of southern states.

The Vermont senator, on the other hand, has been strongest in states that held caucuses. Here, including on Saturday, he has routinely crushed Clinton. Unfortunately for him, of the 22 primaries left, only five are caucuses and only two of those are stateside.

That means that both candidates have largely exhausted the areas where they are strongest. The remaining map seems to favor Clinton, who holds leads in early polls in the remaining major states (California, New York and Pennsylvania). Based on the results to date, the demographics of states like Maryland and Connecticut also favor her. In order to close the gap, Sanders would not only have to win most of these states but he would also have to beat Clinton by considerable margins.

But not all is lost for him. Sanders has not only won the last five contests but he has also surpassed his delegate targets identified by Nate Silver’s website FiveThirtyEight — often by considerable margins. He now has another week to try to consolidate his momentum heading into the Wisconsin primary, which is a neck-and-neck race that Clinton leads slightly.

If Sanders were to win in Wisconsin and follow that up with a victory in Wyoming, where he is favored, all of a sudden Clinton would be without a victory for four weeks heading into the crucial primary in New York on April 19. Sanders, who is trailing by 48% according to the most recent poll, has to win the Empire State and he likely needs a lot of momentum to do so.

Still, New York, which is the second-biggest prize left in the calendar with 247 pledged delegates, will be an uphill battle for Sanders. Clinton was twice elected to represent the state in the Senate and also won the 2008 primary with 57% of the vote. New York has a high percentage of non-white voters, and so far this year, states with similar demographics have favored Clinton.

But if Brooklyn-born Bernie pulls off the upset that his campaign hopes for, it could be the major gamechanger that he needs. A loss for Clinton — even a narrow one — in her home state would be the kind of shocking event that would result in non-stop media coverage of the Democratic race.

There is another factor that tilts in Sanders’s favor: Money. The New York primary is very expensive and Sanders has outraised Clinton considerably in 2016. While her campaign has relied on large donors who could give the maximum amount early on, Sanders get his donations from contributors who give an average of $30 but can do so many times.

In February, he raised a staggering $43.5 million – almost 50% more than Clinton, who cleared $30 million. If Sanders can continue to raise money at that rate, he will be able to spend a lot on ads in states with expensive media markets, such as New York, Pennsylvania and California.

It is likely that Sanders has already achieved something that would have seemed inconceivable at the start of the race: At the end of this month, his campaign will probably have raised more money from individual contributions than Clinton’s campaign, which was believed to be a fundraising juggernaut heading into the race.

In a call Monday morning with the press, Sanders campaign manager Jeff Weaver made his case that the race is far from over.

“I think it is clear now to anyone who knows how to count delegates, that neither candidate, Hillary Clinton or Bernie Sanders, is going to win a majority of the delegates to the Democratic convention,” Weaver told reporters.

Without a pledged delegate count of at least 2,383, Democratic superdelegates will determine the nominee. The Sanders campaign hopes many of those Democratic party insiders will be convinced by Sanders’s strength going into the general election — he consistently beats Donald Trump by bigger margins in head-to-head polls.

In order for Sanders to have a chance, a lot of things will have to break his way — beginning with a victory in Wisconsin. But while he is facing long odds, the race is not over yet, regardless of what the mainstream media would have you believe.