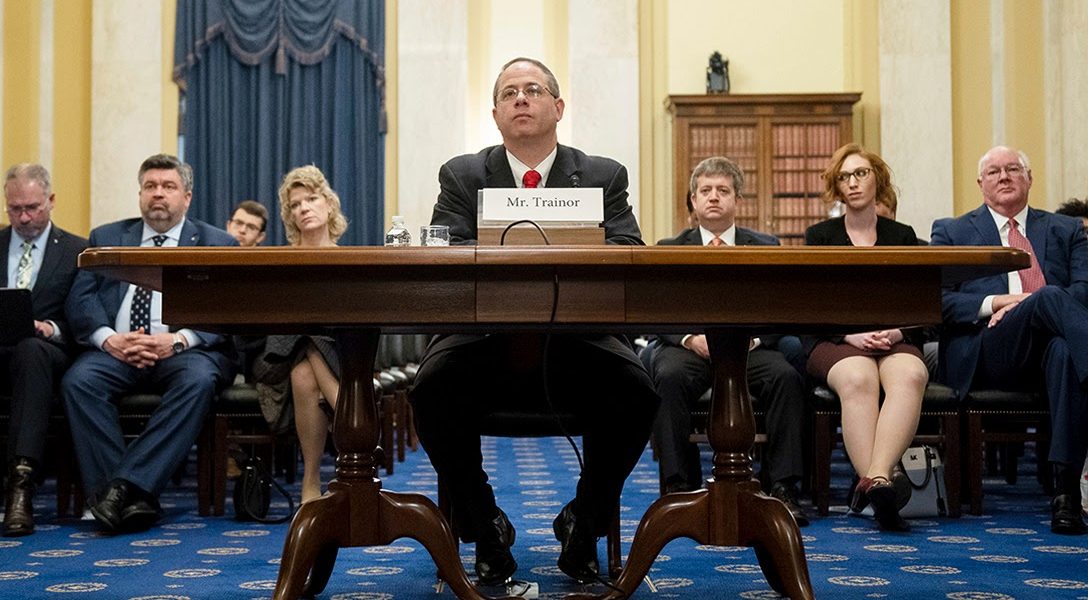 James E. Trainor III testifies before the Senate Rules and Administration Committee for a confirmation hearing to be a member of the Federal Election Commission in Washington on March 10, 2020. Photo credit: © Caroline Brehman/Congressional Quarterly via ZUMA Press
Elections Government Integrity

When President Donald Trump’s nominee to the Federal Election Commission (FEC) was asked during his confirmation hearing last week whether he agreed with the intelligence community’s conclusion that Russia interfered in the 2016 election, he appeared to be choosing his words carefully.

That answer, which was conspicuously missing an acknowledgement that Russia interfered in the 2016 election, has election integrity activists worried. They are concerned that his non-response is an indication that appeasing Trump is more important to Trainor than safeguarding elections.

“It appears that many people around President Trump, or who are hoping to be nominated by President Trump, are declining to be straight with members of Congress about Russia’s role in the 2016 election for fear of angering President Trump,” Brendan Fischer, a staff attorney for the Campaign Legal Center’s federal reform program, told WhoWhatWhy.

“Each time, despite mounting evidence that our elections were under foreign attack, the Commission’s Republicans refused to move forward with even the most basic protections.”

Intelligence officials were on Capitol Hill last week and briefed lawmakers about the current threat Russia poses to the 2020 election. Acting Director of National Intelligence Richard Grenell, however, reportedly skipped the briefing because he expected Democratic lawmakers to ask pointed questions about Russian interference and did not want to upset Trump.

Trainor’s unwillingness to acknowledge that US intelligence officials agree that Russia interfered in the 2016 election, Fischer added, is concerning because Trainor would be in a position to decide whether to enforce campaign finance laws prohibiting foreign spending in US elections.

A number of investigations have concluded that Russia systematically meddled in the 2016 presidential election through cyberattacks and a massive disinformation campaign. Russia’s intelligence agency “exploited the seams between federal authorities and capabilities, and protections for the states,” doing so in a manner that left state election officials ill-prepared to “handle an attack from a hostile nation-state actor,” according to a 2018 report from the Senate Intelligence Committee.

“It’s not clear that it necessarily reflects on his attitude about the ban on foreign nationals spending money in US elections,” said Fischer, “but it very well may reflect on his recognition that President Trump nominated him to this position and he needs to stay on President Trump’s good side.”

‘They’re Doing It as We Sit Here’

Any individual serving on the FEC should take the threat of foreign interference seriously, Michael Beckel, research director for the political reform group Issue One, told WhoWhatWhy.

“Intelligence reports indicate that Russia is already interfering on behalf of presidential candidates and continuing to attempt to sow division and discord in our country,” Beckel added.

Former special counsel Robert Mueller’s two-year investigation underscored the degree to which Russia spread misinformation and exploited division among Americans online — although the Department of Justice recently dropped its case against two Russian companies that Mueller and his team had accused of funding a massive social media influence campaign.

In his testimony to Congress last year, Mueller emphasized that the Russian government “interfered in our election in sweeping and systematic fashion.” Social media companies like Facebook, for example, found more than $100,000 worth of advertisements purchased with Russian currency.

“It wasn’t a single attempt,” Mueller said last year. “They’re doing it as we sit here, and they expect to do it during the next campaign.”

But the FEC has failed time and again to agree on steps to identify and deter foreign interference in the aftermath of the 2016 election. Then-chair of the FEC Ellen Weintraub sent a letter to Klobuchar in September 2018 that highlighted multiple examples of Republican commissioners’ obstructing rule-making efforts to combat foreign interference.

Rules that would protect elections from foreign corporate spending, allow commissioners to “consider every option for reducing the potential for foreign spending in our elections,” and strengthen online advertising disclosures have all been blocked since the 2016 election, Weintraub said in her letter.

“Each time, despite mounting evidence that our elections were under foreign attack, the Commission’s Republicans refused to move forward with even the most basic protections,” Weintraub wrote.

In the likely event that Trainor is confirmed, he will be charged with enacting new rules and regulations to prevent foreign interference in elections. His record, Fischer added, suggests that Trainor would be unlikely to take an active role in that.

I’m far more concerned about *partisan interference* in our elections; like that App they used in Iowa to screw Bernie. Names like Kathryn Harris, Jeb Bush, and that *#$% from
Ohio… don’t forget MI, PA and WI. A whole *bunch* of shady machines, closed
polling places, voter purges etc. The Russians don’t even come *close*.

What about the treatment developed in Cuba, interferon alpha 2B? It was used in China and other countries. A team of Cuban doctors have been deployed to Italy to assist them. The drug is not claimed to cure the virus but reduces the deaths. Is the silence because it was developed in Cuba?