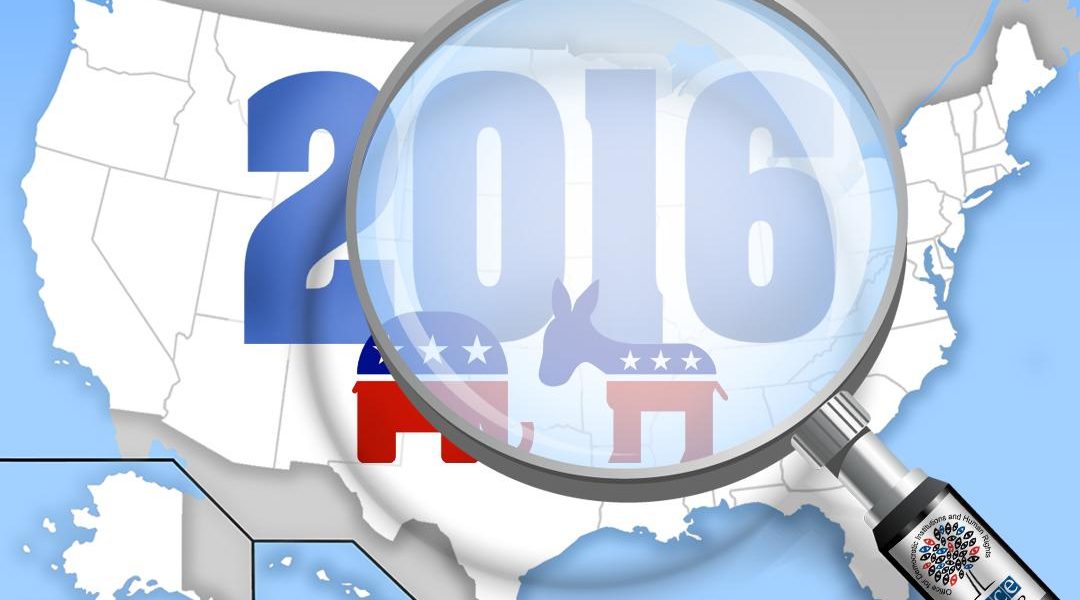 Americans may think their democratic system is the greatest in the world, but a group monitoring the state of democracy internationally is not so sure.

It’s got a long title, but a short, tight mission statement. The Office For Democratic Institutions and Human Rights (ODIHR), a part of the multi-nation Organization for Security and Cooperation in Europe (OSCE) is responsible for ensuring “full respect for human rights and fundamental freedoms” among its 57 member states — including the US, most of Europe, as well as some of Asia.

Usually, ODIHR comes in to ensure that elections by new and struggling democracies are upheld — they sent, for instance, over 700 observers to Ukraine in 2015 to observe its local elections in the wake of having overthrown its previous government in 2014.

But ODIHR is now viewing the United States in a similar light. ODIHR announced that it will be sending 100 long-term observers to monitor the United States election process between now and the election on November 8th, along with an additional 400 short-term observers who will directly monitor the process on Election Day.

“We will observe the presidential elections in the United States much more intensely than the last elections in 2012,” Michael Link, ODIHR’s director, told the German newspaper Heilbronner Stimme, citing problems the organization had had in monitoring the previous presidential race.

This is more than double the 44 long-term observers that ODIHR sent in 2012.

ODIHR spokesman Thomas Rhymer, when contacted by WhoWhatWhy, chose not to comment on predictions about the 2016 elections.

The decision comes after a report released by ODIHR that found those previous elections to be “competitive” and “professional, but that “technical aspects of the electoral process were often unduly politicized.”

Politicians often talk about the “exceptionalism” of America. And when it comes to problems in voting, they might be right.

ODIHR sends observers to numerous elections in its 57 member states. But the sheer amount of observers needed in the United States points to how much the supposed “land of the free” is lagging behind its peers in actually being free. America’s election problems do not apply to similar developed democracies in the modern world.

America lags behind even countries new to democracy. Montenegro, which became an independent democracy less than a decade ago, received a glowing assessment from observers for its 2013 presidential election. ODIHR described the election in that small country, which was part of the Yugoslavian dictatorship as recently as 1992, as “professionally and efficiently administered,” and noted that “candidates campaigned freely and fundamental rights to expression, movement and association were mostly respected.”

Observers were not nearly so kind to the United States in 2012. And so they have vastly increased their scrutiny of the upcoming November election.

ODIHR’s concerns from outside the United States echo similar cries from election watchdogs within the US.

In 2012, the National Association for the Advancement of Colored People, which has fought for extended voting rights on behalf of racial minorities for decades, advocated for international monitoring before the United Nations Human Rights Commission in Geneva.

“The United States has always been a beacon of democracy for other nations,” said Roslyn M. Brock, Chairman of the NAACP Board of Directors, at the time. “When we do not uphold the highest standard, it can have major implications for democracy advocates across the globe.”

Between 2012 and now, one big change has increased worries that American elections won’t be fair: the 2013 Supreme Court case of Shelby County v. Holder. The court struck down one of the most important provisions of the Voting Rights Act of 1965, Section 5: Districts with a history of racial discrimination or disenfranchisement must clear any changes to voting law or procedure with the Justice Department before implementing them.

In a country with 50 states, hundreds of counties, and thousands of municipalities that each administer their own elections without any large-scale federal oversight or unified practice, Section 5 of the Voting Rights Act was one of the very few ways that American elections had been subject to oversight.

But the Shelby County Supreme Court decision removed the requirements that districts needed to get clearance for voting changes, effectively meaning none do. The Voting Rights Act had ensured oversight at least for the most egregious election districts, even if it did not standardize elections in the whole country.

WhoWhatWhy has reported before on the issues that the Supreme Court caused in ending the safeguards put in place during the Civil Rights movement to ensure that minorities were able to vote fairly. In New York City, a voter purge of more than 100,000 Democrats right before the presidential primary caused widespread problems, leading many to question the integrity of the results.

The voter purge in Brooklyn, which disproportionately affected Latino voters, would easily have been stopped if the Supreme Court had not loosened rules on changes to election law.

WhoWhatWhy reported in May on how the Supreme Court opened the door to onerous restrictions in Virginia’s elections, which could be big enough to sway the election in November in that swing state. The clearest issue comes from newly enacted voter ID laws, which, along with those in sixteen other states, require citizens to present state-issued identification, unlike in previous elections.

ODIHR’s recommendations for the 2016 election expressed deep concern for the Shelby County decision and fears that it would lead to even worse problems for voting in this country than in the 2012 election.

The report focused particularly on the new voter identification laws, and agreed with other elections experts in pointing to how those requirements will disproportionately affect minority voters.

The disenfranchisement of minorities highlighted in the report does not stop there. The report takes issue with the 5.8 million prisoners and ex-prisoners in the country who are forbidden from voting, 2.6 million after completing their sentences, pointing to how an outsize 2.2 million of them are African American.

The report adds to this disenfranchised population the 4.1 million residents of US territories, and the 600,000 residents of Washington, D.C., all unable to fully participate in their country’s democratic process.

ODIHR takes issue with the way that voting is far from uniform throughout the United States. Not only does this cause issues for ensuring that absentee voting and voter registration is handled well; it also allows for problems in voting machines to go unchecked.

In addition, we already know the state of the country’s aging and glitch-prone voting machines, and we have good reason to fear their outdated and unsecured technology, so none of these other problems should be taken lightly. ODIHR applauds the return in many states to paper trails alongside electronic voting, but takes issue with the problems implementing such systems nationwide.

Reading through the entirety of the ODIHR recommendations for 2016 is like browsing through a laundry list of problems in America.

The 2012 report complains about the 50 million eligible US citizens who are not registered to vote, calling into question “the effectiveness of existing measures to ensure that all persons entitled to vote are able to exercise that right.”

The 2016 recommendations come at the end of a bitter primary campaign on both sides, and the document damns the way the national conversation has played out. It expresses “concerns about negative stereotyping of women and an increase in inflammatory speech targeting minorities that may lead to isolated incidents of violence.”

Eleven years ago, the USA’s recently re-elected president declared it “the policy of the United States to seek and support the growth of democratic movements and institutions in every nation and culture.”

That statement came from George W. Bush, a president whose initial election came only after an extremely contentious failure of electoral systems in the 2000 election, which required a protracted recount, the cancellation of votes by many, and eventual results being decided by the unelected Supreme Court, contrary to the votes of the majority of Americans.

Sixteen years later, concerns over the country’s elections have not abated. And the concerns by ODIHR show that, when it comes to democratic movements and institutions, the United States should first support itself.