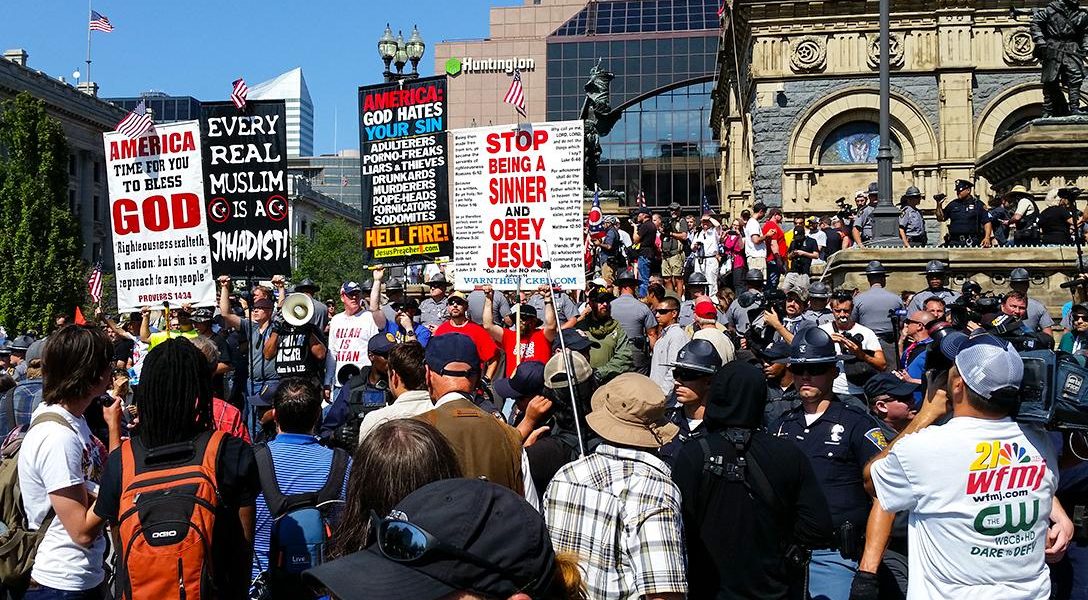 GOP’s Anger Does Not Spill into the Streets of Cleveland

It was supposed to be chaos.

The city of Cleveland, in the face of Donald Trump’s nomination by the Republican National Convention, in the midst of perhaps the greatest civil unrest that has erupted in America in decades, in the wake of Baton Rouge, Dallas, and Falcon Heights, was expected to be a bloodbath. Protesters, cops, and Trump supporters, all in the crucible of hot summer days by Lake Erie.

The media cited predictions of widespread clashes. We at WhoWhatWhy were no different. The national mood, combined with the contentious and angry voices all convening in the same place, and a massive police presence, seemed like it would turn downtown Cleveland into a war-zone.

But we all underestimated the city of Cleveland — despite a scuffle between different protesters and police following a flag burning on the third day of the convention.

“Everybody is welcome to come to Cleveland,” Satinder Puri, a 74-year-old retired Cleveland resident told WhoWhatWhy. “I am a far left liberal — nothing in common with our Republican friends when it comes to solutions to our social issues. But they are coming to our city as guests and they should be welcomed as guests.”

Puri was protesting the recent renovations of the Cleveland Public Square, which he felt had been done to benefit the wealthy residents of the city’s downtown at the expense of the city’s poorer citizens. On Tuesday, the square was home for the day to hundreds of angry protesters from across the political spectrum. And none of this led to any real violence.

There were brief moments of conflict. At one point, Alex Jones, the conservative radio personality and conspiracy theorist behind InfoWars, walked through the crowded square with a megaphone, until a small shoving match started among those assembled. But tensions quickly subsided, as police moved into the crowd and kept things from becoming too contentious.

Law enforcement presence has been nearly ubiquitous in downtown Cleveland during the convention. The Cleveland city police and Ohio state troopers have been joined by uniformed officers from across the country — one sees badges from Indiana, California, Michigan, and everywhere else.

The police officers stand on corners, ride past on motorcycles and in vans, and put themselves between the most vitriolic protesters. An especially large contingent ride bicycles, which are often used to create makeshift walls in moments of heightened tension. Cleveland police went through extensive training before the convention, mostly focused on learning to prevent incidents from escalating. Those approached by WhoWhatWhy were not carrying riot gear, such as tear gas launchers or shields, though there were some officers so equipped.

Surprisingly, the police presence so far has projected not fear but a sense of calm, almost comfort. The cops interviewed by WhoWhatWhy (who would not give quotes on the record) were largely cheerful and easygoing — and optimistic that the situation was under control.

This sentiment was echoed not only by the residents of Cleveland, but even by most of the protesters who talked to WhoWhatWhy, even as their actions were constrained by those very police.

“Overall, I think the police presence is needed,” said David Grophear, a documentarian from Boston, who came to Cleveland to participate in and film the protests. Grophear felt that the tone of both the protesters and the police had changed in the wake of recent shootings targeting police in Dallas and Baton Rouge.

“A lot of people I’ve spoken to — they’re understanding that the cops might be on edge,” Grophear told WhoWhatWhy.

Grophear’s co-filmmaker, Ron Webber (who filmed the footage of the Alex Jones scuffle mentioned above) was involved in one of the few moments of real physical confrontation.

On the second day of protests an impromptu march by a group of racial-justice activists encountered a wall of cops trying to prevent them from blocking traffic.

At East 6th Street and Superior in downtown Cleveland, police officers began shoving protesters back, and Webber ended up on the ground when protesters behind him would not retreat.

But even he praised the behavior of the police in dealing with street demonstrations.

“When I got knocked down, the immediate thing I said was, ‘I’m sorry. Let’s de-escalate. This is human error,’” Webber told WhoWhatWhy. He did not express any anger at how the police handled the situation, saying that they “got worked up and went too far” when the protests expanded outside of the protest zone and into the streets.

“It was a spontaneous parade off the grid where there were not enough cops to protesters,” he said. “It was very fast moving. There was an immediacy and I think a freaked-out-ness that you could sense on both sides.”

Webber felt that overall the police seemed to be doing their best to accommodate protesters’ rights to free speech, and said his other interactions with law enforcement had been extremely pleasant. A cop even thanked him for quoting scripture to a group of radical Christians who were preaching about sin — an action that prompted the radical Christians to leave.

The lack of real drama at the protests came as a surprise to the media (including myself). Reporters and camera operators swarmed throughout the downtown and especially a public square, looking for something interesting. The media, who were quick to report on the brief tussle triggered by Alex Jones’s appearance, seemed almost disappointed when it subsided.

Many protesters who talked to WhoWhatWhy expressed a feeling that there were more people from the media than protesters in many situations.

Andre Starobin, who flew to Cleveland from Oakland, Calif., to protest, felt disappointed by what he saw as a lack of real drama at the convention. He spent Tuesday, his first day in the city, looking for a way to express his distaste for Trump but mostly encountered reporters looking for people like him.

“The audience is there,” Starobin told WhoWhatWhy, “but there’s no play.” Cleveland residents who talked to WhoWhatWhy before the convention worried about what the crowded downtown brimming with police would mean for the city’s homeless population.

But according to those who work in the city’s shelters, that city’s homeless have not been harmed by the events. In fact, they’ve even been helped.

Eric Morse, the Chief Operating Officer of Frontline Service, a center that does street outreach and other services for the Cleveland homeless community, praised the Cleveland police department for how it handles the homeless overall, and especially in the run-up to the convention.

“We had a lot meetings leading up to the convention,” Morse told WhoWhatWhy. “The police get a bad rap sometimes, but for the most part they’re a compassionate group when it comes to the homeless. They don’t move people along, they don’t drop them off in the middle of nowhere, they don’t harass them when they’re not doing anything wrong, so we got their guarantees that they wouldn’t change any of their behavior for the RNC.”

For the most part, according to Morse, those guarantees have held up. Frontline Service had to change some of its staffing and scheduling as a result of the convention — but their operations have stayed mostly the same.

The biggest effect, according to Morse, has actually been positive — the convention donated all of its leftover food to the city’s homeless shelters, which find themselves pleasantly well-supplied to help their residents.

The Importance of Levity

In the midst of the often angry people protesting, often dressed in crazy costumes and shouting angry messages, there have been those displaying a much more conciliatory tone that  contributed to the overall calm feelings on Tuesday. Triumph the Insult Comic Dog, a puppet character performed by the comedian Robert Smigel, joined a group of fake protesters in the public square Tuesday afternoon. They referred to themselves as the “Eastboro Baptist Church” — playing on the Westboro Baptist Church known for picketing funerals with signs saying “God Hates Fags” and similar hate-speech — and protested against innocuous things like bangs, morning people, and the name Kevin.

Outside a bar just a block away from the convention site, a pair of artists named Adam Duke and Andrew Prechin provided passers by with a 144-foot-long scroll and a collection of crayons, entreating from them to participate in an art project with people of all ideologies. They call the project “The Curious End To The War Against Ourselves” and intend to go the Democratic convention in Philadelphia as well, hoping to find the “most passionate people” and calm them down by having them work on art together.

Justin Veter, 33, a Pizza-Truck owner from from Pittsburgh, PA, drove to Cleveland on his day off. He wanted to take pictures of the convention and walk around, so he decided it would be fun to put on the red striped shirt, hat, and hiking back pack to dress up as Waldo. He hoped that in the face of anger, a little bit of fun would make everything a little bit easier.

“People respond well to this,” Veter told WhoWhatWhy. He said that nearly everyone, including  protesters, police, and delegates, had greeted him by grinning or laughing, even during tense moments. “It doesn’t matter what your race, your religion, your creed, your background is. People respond very well to Waldo.”

“There’s a lot of serious issues going on in this country,” Vetter said.  “But levity is important as well.

“If I can just spread the love for a couple of seconds at a time, then that’s a good thing.”