While many top GOP leaders are avoiding the Republican National Convention next week, thousands of protesters and supporters of Donald Trump are flocking to Cleveland and will create a volatile mix.

Things could get ugly.

“Look at the history. Look at the other Trump rallies,” said Tim Selaty Sr., an organizer for the Citizens for Trump America First rally being held on Monday. “Look at what’s happened over the last four to six weeks.”

Selaty told WhoWhatWhy, “You throw in the mix all these different groups together — with the current climate it doesn’t really take a rocket scientist to figure this out.”

After a week of protests, arrests, and violence across the country, the national mood seems to be at a cliff’s edge. Violence has broken out at multiple Trump rallies, perpetrated both by attendees supporting the real estate mogul, and by protesters against him.

With major demonstrations from both sides beginning Monday along with the start of the convention itself, organizers, both pro- and anti-Trump, are urging their supporters to remain peaceful.

“We’re planning a family-friendly mass march to oppose Trump and the agenda of the Republican National Convention,” said Mick Kelly, one of the leaders of a march Monday afternoon organized by the Coalition to Stop Trump. “Our plan is to do exactly that. What others do, others do.” 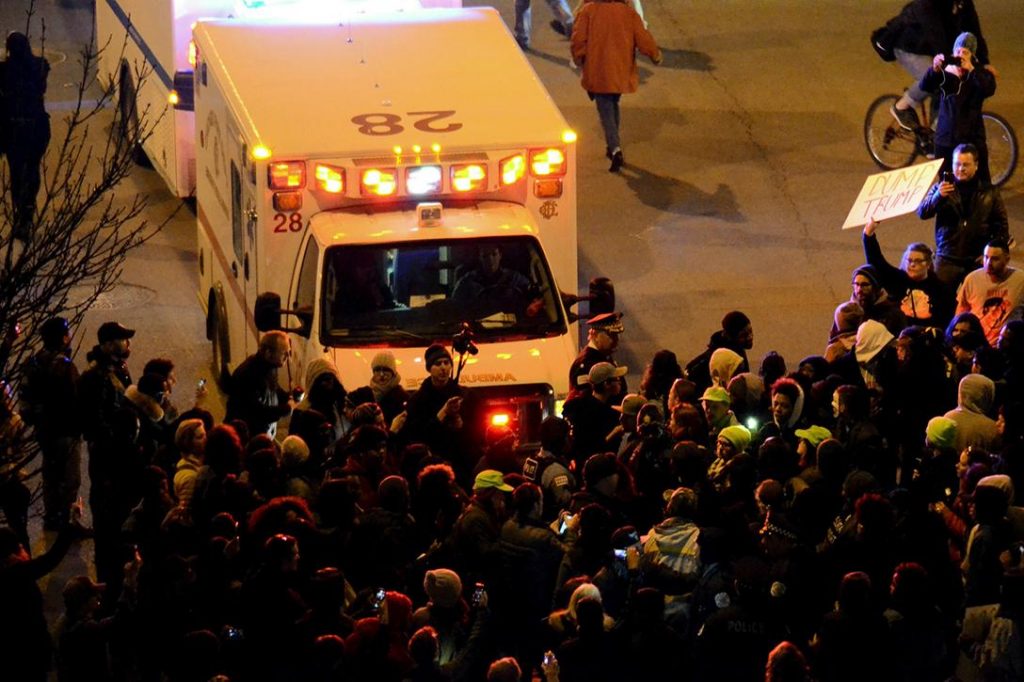 All the demonstrators reached by WhoWhatWhy expressed a fear that violence at their events would derail the message they were trying to express. Most expected that some confrontation would be inevitable, but insisted that their own group would not be the ones to start it. And many are going to great lengths to ensure that.

The Citizens for Trump rally is hiring additional security for their march beyond that provided by the Cleveland Police. They will be checking people at the entrance to the rally grounds, in an effort to weed out protesters trying to disrupt the event, or those planning violence.

Similar precautions are planned for Citizens for Trump’s “America First” rally, Selaty told WhoWhatWhy. “We expect that if we have more security and we have a lot more able bodies willing to make sure that [disruptive] people aren’t getting in.”

Organize! Ohio, an anti-poverty coalition planning a march through poor neighborhoods of Cleveland on the first day of the convention, is instructing activists in peacekeeping and de-escalation tactics. Stand Together Against Trump, a group of Cleveland-area doctors and caregivers, is doing the same.

Brian Stefan, an employee of the Inter-Religious Task Force on Central America, is training Organize! Ohio’s peacekeepers. He emphasizes focusing on “points of potential volatility,” showing peacekeepers how to reduce tensions “so that [conflict] doesn’t move from the verbal to the physical.” Peacekeepers will also be taught how to work with the police.

Stefan and other peacekeepers are planning for counter-protesters, but they hope their tactics will be enough to prevent trouble. “We’re not naive, but we’re not worried about it,” he told WhoWhatWhy.

Stefan, like many of the activists reached by WhoWhatWhy, nevertheless admitted to being “on edge.” He referred to Cleveland in the days leading up to the convention as feeling like “a war zone.” 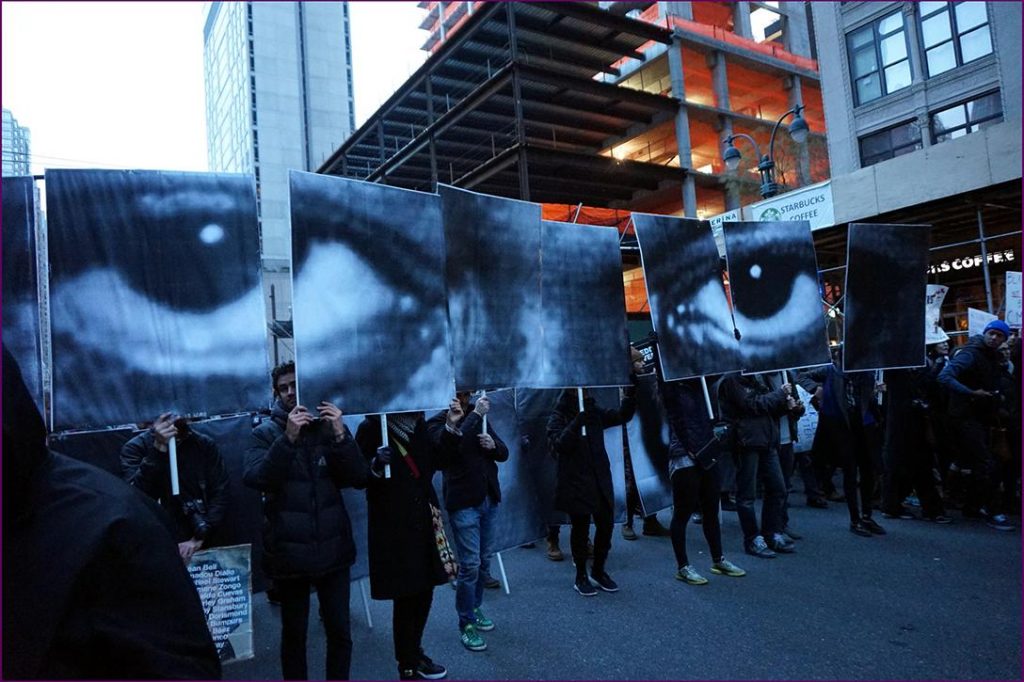 As the second-largest city in one of the largest and most hotly contested swing states — and the home of Tamir Rice, the 12-year-old boy whose shooting in 2014 by the police helped ignite the Black Lives Matter movement — Cleveland is no stranger to heated protest.

Yet activists in Cleveland frequently spoke of a solidarity among different groups that reaches across the usual political divisions. Ralph King, the Cleveland-based organizer of the right-leaning Citizens for Trump America First rally, spoke of the friends he has in the left-leaning Occupy Ohio. Some of these relationships go back  to 2014, when Ohio Tea Party members joined with Occupy Ohio activists to protest using city funds to pay for a sports arena.

“We love this town. And that’s why we’re here,” King told WhoWhatWhy.

“Every group that comes here and wants to protest against Donald Trump — they have every single right to do it. And they have the right to do it in a manner where they are all safe. And if either one of our sides give up that right, we both are screwed.”

But even as the city’s residents express this shared solidarity for their hometown, they worry about the effect that thousands of people from outside the area could have. 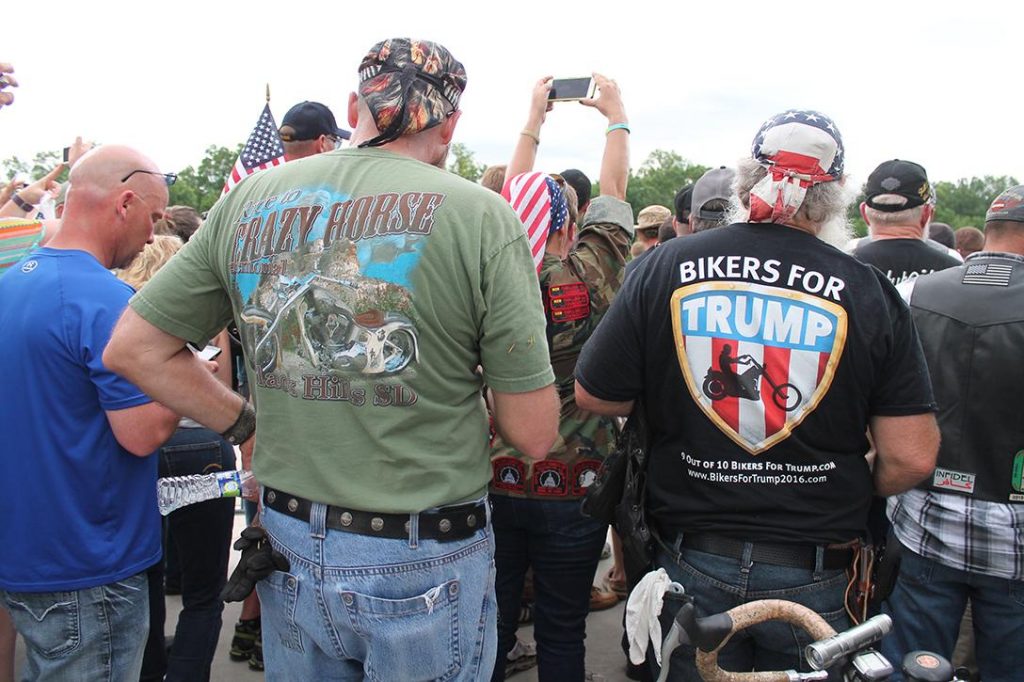 Breitbart News reported that Bikers for Trump, a motorcycle club, would be coming to Cleveland with the intention of protecting the convention from agitators. Like all the other groups attending, the bikers insist they will spend their time in town peacefully, though they talk tough.

“We’ve seen how these paid agitators have thrown eggs and gotten violent at other Trump events around the country, and we’re not going to put up with it,” the group’s organizer, Chris Cox, was quoted by Breitbart.

The Traditionalist Workers Party, a white nationalist group that held a rally in Sacramento where five were stabbed in late June, announced that they too would be coming to Cleveland, to “make sure that the Donald Trump supporters are defended,” according to McClatchyDC.

The group did not respond to WhoWhatWhy’s requests for comment, and has not applied for any permits listed by the city of Cleveland.

The city’s veteran activists worry as well about the beefed-up security that comes with the arrival of so many outsiders with so many different agendas.

“We’ve had a relationship between protesters and the police here,” said an Occupy and Black Lives Matter activist who requested not to be identified by name. “The police know if people are in the streets, it’s probably not going to escalate beyond that. But there are all these cops coming from out of town who don’t know that. The cops out here usually know who the protesters are when they see them. They know who to talk to. The police coming in from out of state won’t know that, and if something got out of hand, that would severely make that relationship harder.”

The police and the city government of Cleveland are facing a difficult task — of trying to both keep people safe and allow for loud voices to proclaim their views.

“They’re pretty scared that the resources — although they’re being extended by the federal government at this point — may not be enough to contain the possible outbreak of people who don’t like each other very much,” said Selaty., of the Citizens for Trump America First rally. 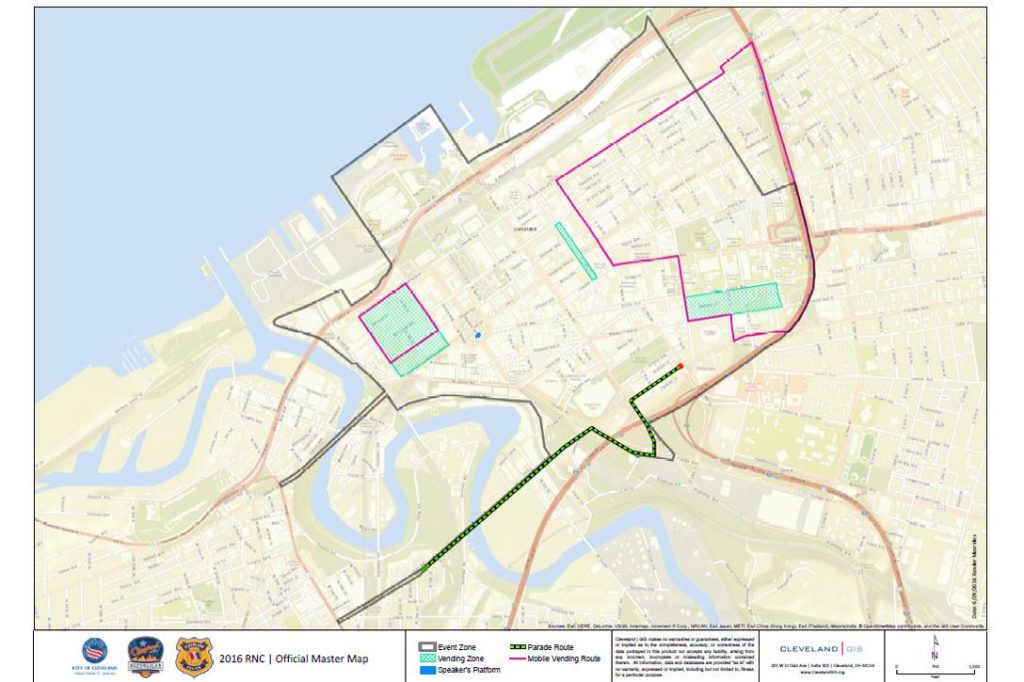 This City of Cleveland map shows the locations of the event zone, parade route, vending areas and speaker’s platform during the Republican National Convention.
Photo credit: City of Cleveland

The city has defined a large area around the Quicken Loans Arena — where the actual convention will take place — as the “event zone,” and banned certain items from being brought into it.

That event zone encompasses most of downtown Cleveland.

Prohibited items include any sort of metal tubing, umbrellas with metal tips, glass bottles, tennis balls, gas masks, and padlocks — pretty much anything that could conceivably be used as a weapon.

Also banned are air rifles and paintball guns — but conspicuously not actual guns. Ohio is an open carry state.

“We weren’t planning to bring squirt guns anyway,” said Tom Burke, a labor and anti-war activist helping to plan the Coalition to Stop Trump march on Monday, July 18. He, nevertheless, expressed concern over the seeming disconnect between banning them and still allowing open carry of weapons.

Although the police will not prohibit people from carrying handguns if they have a license, security at the Citizens for Trump rally is planning to turn away anyone open-carrying large guns.

This stance is at odds with Trump’s very expansive position on gun access and his glowing endorsement from the National Rifle Association. But, without acknowledging the irony, the Citizens for Trump organizers made it clear that their first concern was the safety and security of the rally-goers.

The impact of heightened security on the normal day-to-day life in the city worried many of the activists. Downtown Cleveland is a bustling business and residential center, with  a mass-transit system bringing in thousands of commuters.

One activist noted that the prohibitions on certain items in the city center would impose special hardships on the many homeless living in the area who keep all their belongings with them. 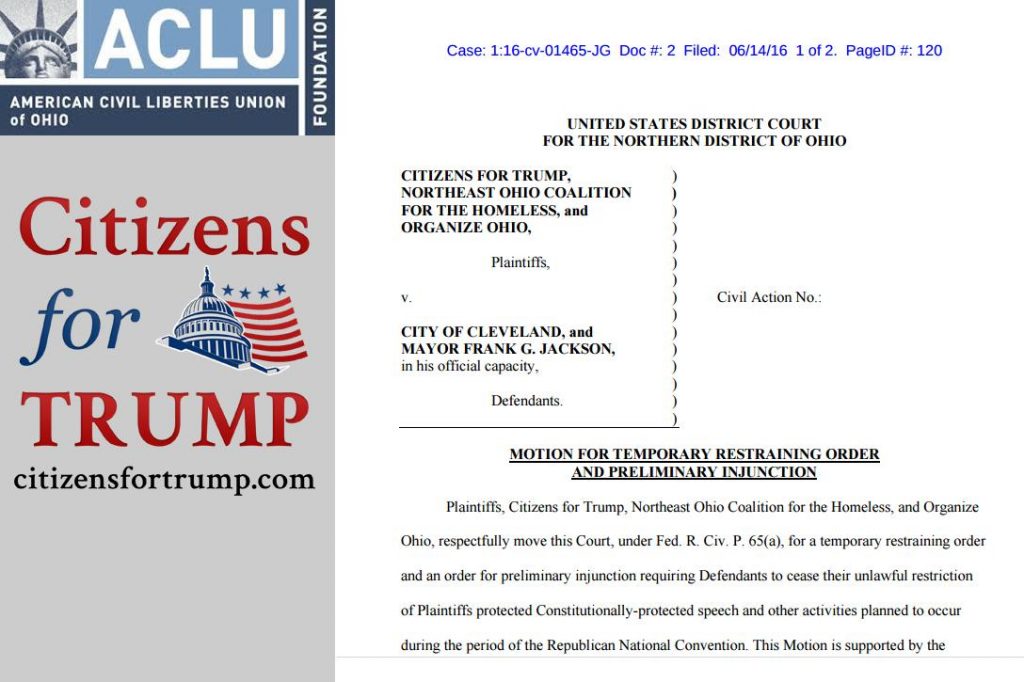 The American Civil Liberties Union teamed up with Citizens for Trump in winning a suit in federal court against the City of Cleveland to shrink the event zone from its original 3.5 square miles to what they felt was a more reasonable 1.7 square miles.

It was not the only fight the city had with activists. Many of the groups complained about a long and drawn out permit process that left them without the locations they had planned for and with far less time to plan their demonstrations.

The permits given out by the city sent the various different demonstrations and marches to far-flung parts of the downtown area in order to keep them separate. Most activists praised this attempt to keep demonstrators with opposing views from clashing with each other.

But the Coalition to Stop Donald Trump was not pleased. They lost access to their intended route, being relegated to march across what they refer to as “a bridge to nowhere,” over an industrial zone.

“No one will see us and no one will hear us,” one of the march organizers, Mick Kelly, told WhoWhatWhy. “That’s just not happening.” Instead, the group plans on starting in the Cleveland Public Square on Monday even if they do not get the permits they want.

When asked if that meant that the Coalition to Stop Trump was ready to defy the city and cross police barricades, Kelly would not give a direct answer. “We can’t predict what the city is going to do and what others are going to do.”