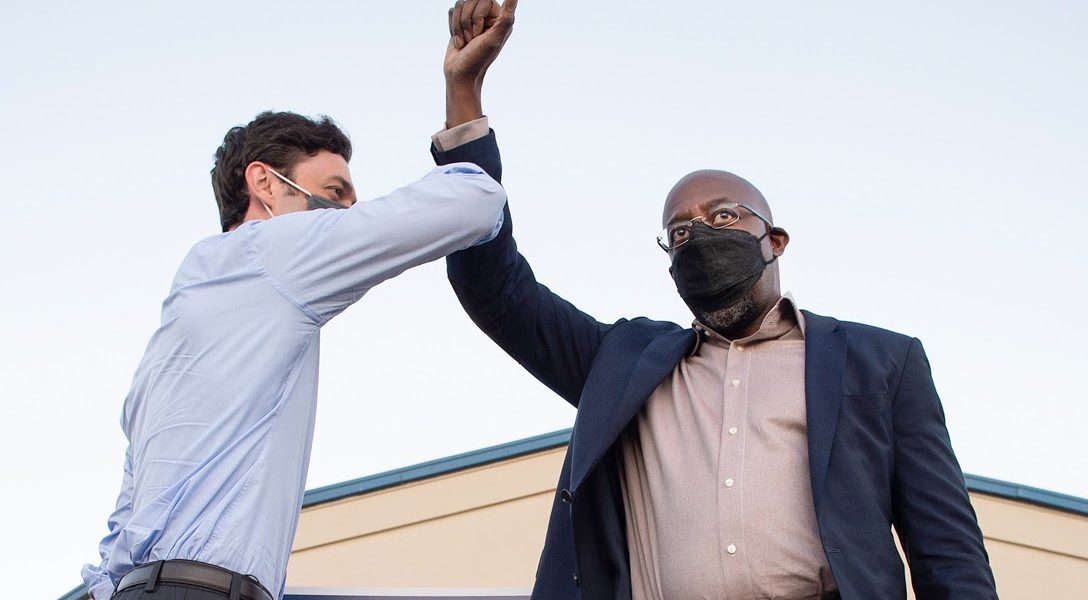 Georgia turned blue after all, not only in the presidential election, but now in its Senate runoffs, confounding Republicans who were quick to blame President Trump.

With Jon Ossoff on track to edge out incumbent David Perdue by less than a percentage point, and Rev. Raphael Warnock besting Trump-appointed Kelly Loeffler, Georgia is flipping the Senate to Democratic control, with Vice President Kamala Harris set to cast the deciding vote on legislation and nominations.

A surge in Black voter turnout is being heralded as a deciding factor in these elections, with 93 percent of Black voters choosing Democrats over Republicans on the ticket. African Americans made up an even higher percentage of the electorate than they did for Joe Biden in November, while Republican turnout declined.

Meanwhile, Trump stews on Twitter and in the background. Once the hero of the Republican Party who could do no wrong, Trump is having trouble coming to terms with the fact that perhaps most of his allies within the party were following his orders only because he was their boss.

It turns out, he is making a pretty good fall guy.

“When you tell people your vote doesn’t count and has been stolen, and people start to believe that, then you go to the two senators and ask the secretary of state to resign and trigger a civil war in the Republican Party when we need to unite, all of that stems with his decision-making since the November 3 election,” Sterling said on CNN.

GOP strategists laid out a myriad of reasons why Trump led to their downfall in Georgia, with most focusing on the president’s inability to accept his own loss, which caused him to meddle with Georgia Secretary of State Brad Raffensperger. This culminated in a threatening — and off-putting — phone call first reported by the Washington Post.

The need to put himself before the party has been a common theme throughout his presidency, but never more clearly seen than in the runup to the Georgia election runoffs. By repeatedly claiming a rigged system made him lose, Trump convinced some of his base not to vote at all, with conspiracy theories abounding on the internet, particularly on Parler, the new conservative social media platform where Trump supporters went in droves after the general election.

Strategists also point to his mere presence the day before the election being a motivator for Democrats to go out to vote against his party. Had he stepped back and accepted defeat, this vote wouldn’t have seemed as pressing, they maintain.

The scattered Republican efforts to get out the vote paled in comparison to the massive, coordinated push by Democratic voting activists, who barraged voters with calls, emails, texts, and mail about the runoffs and their historic importance.

“We have found out that actually talking to people and establishing a relationship highly increases the chances that they take action, either by registering or filling in a plan to vote,” said Milu Parrilla, a student at Georgia State, who organized voters with their Public Interest Research Group faction.

“Today, this set of elections, both for president and in this runoff, I feel heard as a voter for the first time ever.”  —Sadi Askavi, DeKalb County voter

While Trump’s antics are being blamed for the loss by Republicans, Democrats are attributing the win to issue-based reasons, like access to health care.

“Georgia, like too many other places in this country, is fighting against decades of a legislature controlled by white, wealthy conservatives who have pushed for restrictive laws that make it critically difficult for thousands of people to access health care and keep themselves and their families safe and healthy,” said Monica Raye Simpson, executive director of SisterSong, a collective of Women of Color for Reproductive Justice.

The push to overcome voter suppression in the state played a large role as well, and voters are recognizing Stacey Abrams and her fight for fair elections.

“Georgians owe Stacey Abrams a debt of gratitude,” agreed Tori Dyches from Savannah. “While I’m unspeakably proud of both Jon Ossoff and Raphael Warnock, I do not think they could have won without the hard work of Stacey Abrams.”

The celebratory mood among Georgia’s blue voters is palpable, and many are just enjoying this hard-fought victory.

“I was born in Atlanta, I’ve always lived in Atlanta, and I will die in Atlanta,” said Democratic voter Keesha Holder. “I love my city, but today I love my state. That’s a first.”

“I’ve lived here for three-quarters of my life, and my entire voting career,” said DeKalb County voter, Sadi Askavi. “I’ve voted in every election, with the same feeling of futility each time. I thought I was screaming into the void. Today, this set of elections, both for president and in this runoff, I feel heard as a voter for the first time ever.”

Still, others warn against the Democratic Party’s tendency to rest on their laurels after big wins. Georgia, they say, may have turned blue this year, but just barely. They say the fight ahead remains long and hard. Activists should celebrate now, but keep their eyes on the future, they say.

“I’m thrilled for my state, but the fight is not over,” said Amber Snommis, a blue voter in Cobb County. “We have to take advantage of this momentum into 2022 to flip and keep as many blue house and senate seats as possible, both in Georgia and across the US.”