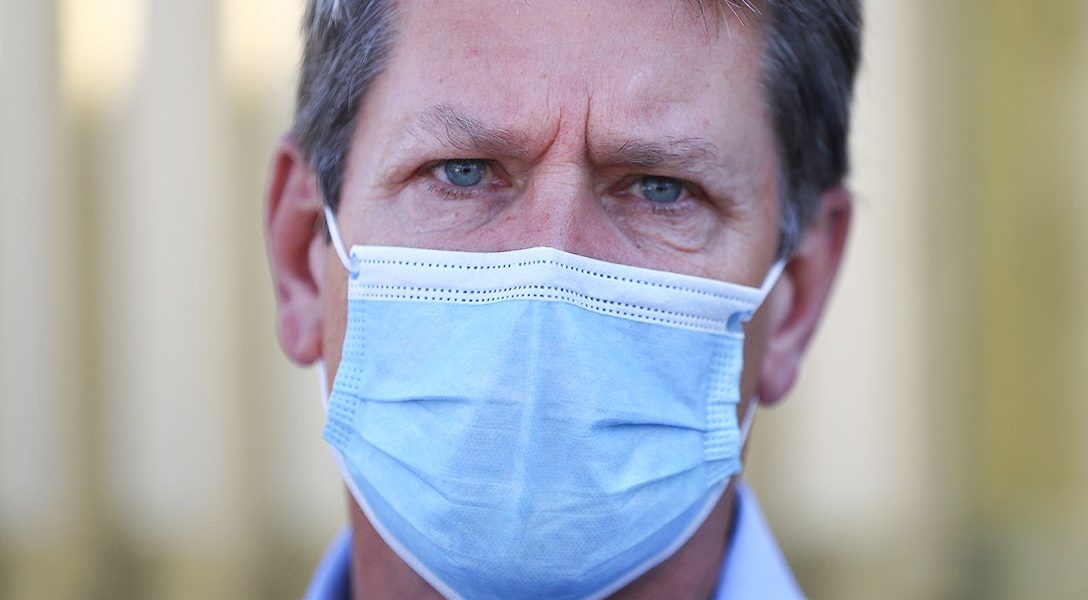 In addition to overseeing the upcoming runoff elections, Georgia’s top election officials have been fighting back attempts by outgoing President Donald Trump and his allies to overturn Joe Biden’s narrow but historic win in the state — the first Democrat to win the state since 1992.

Trump’s Twitter attacks pushed the officials into the national spotlight after they rejected his allegations of widespread voter fraud in the state and repeatedly called out his lies about a “rigged” election. They pleaded with Trump and his allies to stop spreading misinformation about the election and pushed back against far-fetched conspiracy theories.

“I am not, in fact, a communist. … I believe I can speak for the secretary, myself, and likely the governor: none of us have received any money from the Chinese communists,” Gabriel Sterling, the voting system implementation manager under Georgia Secretary of State Brad Raffensperger, said during a December 10 briefing.

Trump has also relentlessly taunted their boss, Georgia Gov. Brian Kemp (R), for certifying (and recertifying) the results for Biden, and for refusing to fulfill his requests to pressure the state Legislature to select their own Trump-friendly electors who would ignore the popular vote — an act that would have violated the law.

Outside of the Trump world, Raffensperger, Sterling, and even Kemp, who all voted for Trump, have been praised for defending election integrity and not giving in to the president’s baseless accusations.

Kemp has been fervently loyal to the president and owes his rise to the state’s highest seat to Trump’s endorsement during the 2018 governor’s race. Kemp continued showing his support even after Trump criticized him for filling Georgia’s empty Senate seat with Kelly Loeffler in 2019 and after the men clashed over Kemp’s response to the coronavirus. But Trump interpreted Kemp’s refusal to break the law to overturn the election as the ultimate betrayal.

Outside of the Trump world, Raffensperger, Sterling, and even Kemp, who all voted for Trump, have been praised for defending election integrity and not giving in to the president’s baseless accusations. Raffensperger even received one of the Democracy Action Hero Awards, given to “public officials who showed true leadership, bravery and a commitment to American democracy in the 2020 general election” by actor and former California Gov. Arnold Schwarzenegger.

But behind the recent push to promote fair and safe elections is a deep-rooted history of voter suppression — one that is deeply connected to the state’s Republican Party.

Just last week, a judge halted voter purges in two Georgia counties ahead of the Senate runoff elections, the latest in a long line of attempts to disenfranchise voters living in the state.

In the past decade, counties across Georgia have reported removing more than 1.6 million voters from the rolls, according to an investigation by APM Reports and Reveal, which has disproportionately affected minority voters. This time frame coincides with Kemp’s arrival among the state’s leadership in 2010 — first as secretary of state and, since 2018, as governor.

Voter purges, sometimes called voter list maintenance, skyrocketed around the country, and especially in Georgia, because of the Supreme Court’s 2013 decision, Shelby County v. Holder, which struck down a portion of the 1965 Voting Rights Act that prohibited states from enacting changes to their election laws and procedures without getting official authorization, according to the Brennan Center for Justice.

When he was secretary of state — and therefore in charge of state elections — Kemp was sued by a coalition of voting-rights groups over “exact-match” laws, which, between 2013 and 2016, disqualified voters from registering if there were any discrepancies in the spelling of their name between their ID and the registration database, a law that disproportionately affected Black, Hispanic, and Asian voters. When the suit was settled, state officials agreed to introduce reforms and stop the practice, but the state Legislature reinstated a similar law the following year. The Georgia Legislature has since passed a law largely ending the practice after another lawsuit was filed in 2018.

In 2017, Kemp oversaw half a million voters purged. According to the AMP Reports investigation, nearly 107,000 of those voters were removed from the registration list due to a so-called “use-it-or-lose-it” law — a rule stating that people who have not voted in the last two elections and have not returned a postcard sent to their address are considered to have moved, and are, therefore, removed from the voter registration list.

While voter list maintenance is useful to withdraw people who have, in fact, moved or died, according to Brennan Center for Justice researcher Kevin Morris, “Use-it-or-lose-it purges are awful, simply put.”

“I’m thinking in particular in 2008 and 2012, a lot of Black voters that had not historically participated [in elections], came out from the sidelines because they wanted to vote for Obama. So you can imagine someone voting in 2012 and then saying ‘You know what, none of these candidates particularly represent me’ for the next six years, and then, six, 10, 12 years later someone comes along that they’re really excited to vote for, but because they’ve been removed from the rolls, simply because they didn’t vote, they might find themselves unable to cast a ballot,” Morris said.

The “use-it-or-lose-it” process does not violate federal laws, the US Supreme Court decided in a 5-4 ruling on the 2018 Husted v. Philip Randolph Institute case.

The main problem, Morris says, is the lack of transparency around voter list maintenance.

Since Stacey Abrams and Kemp faced off during the closely watched 2018 gubernatorial race, Abrams has accused Kemp of blatantly disenfranchising minority voters through delayed and denied voter registration and voter purges.

In March 2019, the US House of Representatives Oversight Committee launched an investigation into the accusations, stating its concern over reports that Georgians “faced unprecedented challenges with registering to vote and significant barriers to casting their votes” during Kemp’s tenure as secretary of state and during the 2018 election.

Despite the Secretary of State’s Office and Kemp deliberately seeking to stonewall the investigation by refusing to share requested documents, the Oversight Committee found significant “concerning information about voter suppression in Georgia,” from the removal of polling stations to voter purges.

The APM Reports investigation found that, after Texas, Georgia is the state with the highest number of voting rights lawsuits filed against its officials since 2011.

“This is one of the reasons we need stricter federal oversight of voter purge laws,” Morris told WhoWhatWhy. “A lot of it is still done at a local level, some of it is still up to the states. There can be misunderstandings and there is some gray area around what’s considered a systematic purge.”

But, as in many other conservative states, Georgia officials are reluctant to give up local control over their elections to the federal government. Officials who are pushing for anti-voting practices across the board are the ones who don’t want to see the National Voter Registration Act (NVRA) and voter protections against purges beefed up, Morris added.

Just this month, Raffensperger was sued by several civil rights groups alleging that nearly 200,000 voters were purged from the state’s voter registration database in 2019.

For his part, Raffensperger drew sharp criticism after the 2018 midterm election, which was deemed a “complete meltdown” by the Atlanta Journal-Constitution. Voting-rights advocates blamed problems with the newly implemented $104 million system of voting machines and hours-long wait times, among other issues, on Raffensperger’s poor management of the election process.

Trying to avoid similar troubles in the presidential election, Raffensperger, who was endorsed by Trump in 2018, decided to send out 6.9 million absentee ballot request forms ahead of the November 3 general election, infuriating some of his fellow Republicans. While Georgia has had no-excuse absentee voting since 2005, voters normally have to initiate the process on their own. Last week, Raffensperger announced his intention to restrict no-excuse absentee voting.

As early voting for the January 5 runoff races neared its conclusion, four out of the 10 most populous counties came under fire for cutting back on early voting locations, which civil rights organizations say is yet another attempt to disenfranchise Black and Hispanic voters, NBC News reported.

“It’s deeply concerning,” Atlanta Mayor Keisha Lance Bottoms told MSNBC. “We can’t rely on Republicans in the state to implode, we’ve got to show up and vote.”

Republican state senators vowed to introduce stricter voting laws once the state Legislature returns in January, a promise that is likely to add fuel to the debate over voter suppression.