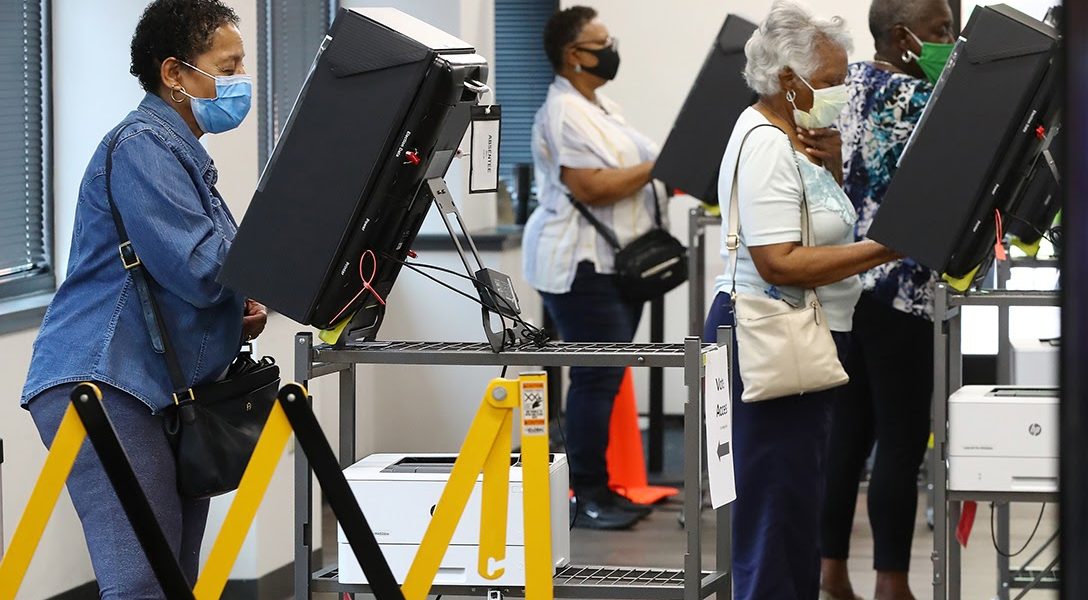 Voters wear masks and cast their ballots at least six feet apart the first day of early voting at the Cobb County Board of Elections & Registration on May 18, 2020, in Marietta, GA. Photo credit: © TNS via ZUMA Wire
Elections Government Integrity

Helen Butler, executive director of the Georgia Coalition for the People’s Agenda and a member of the Morgan County Board of Elections, knows that her state needs more funds in time for the November election, as Georgia’s presidential primary saw many problems.

“Georgia was the epitome of what could go wrong with elections in a pandemic while using new voting equipment,” Butler said during a press conference Wednesday. Long lines, an insufficient number of polling places, and poorly trained poll workers plagued the June 9 primary election.

“We saw that these polling locations were not sufficient for a pandemic, and we’re potentially exposing voters and our election officials to COVID-19,” Butler said.

And she is not alone — election offices across the country could face a worst-case scenario this November.

Carrying out a contentious election is one thing. Doing it on a shoestring budget, amid a pandemic, with the president and Senate Republicans actively undermining confidence in the process, is something else.

Fully funding the November election will cost an estimated $4 billion. Congress already approved an initial $400 million in its first coronavirus relief package. Most of those funds have already been used, however, and heading into November, many election offices are cash-strapped. A recent report by New York University’s Brennan Center for Justice found that in five states — Georgia, Michigan, Missouri, Ohio, and Pennsylvania — the funding has all but dried up, and local election officials will be responsible for up to 90 percent of the cost.

Congress is also set to go home for the scheduled August recess next week. Time is running out, and state and local election officials will face additional challenges to guarantee safety for polling staff and voters in the face of the continuing COVID-19 pandemic.

“Not only that, [Trump is] actively trying to destroy the Postal Service so that ballots can’t even be delivered,” Greenberg said. “Trump is leaving no stone unturned in his attempts to steal this election.”

Senate Republicans signaled in early July that they were willing to provide more federal assistance. So far they have done nothing of substance to achieve that. House Democrats approved a massive $3.6 billion for election assistance in May as part of the latest coronavirus relief package, but when the Senate introduced their version of the legislation, it neglected to provide any funds for state and local election officials.

Sean Eldridge, founder and president of the political advocacy group Stand Up America, called the GOP’s plan a “smack in the face to our democracy” and claimed that Senate Republicans showed they do not care about whether voters can safely cast a ballot.

“It is nothing less than an attempt to suppress the vote in the middle of a pandemic,” Eldridge said. “This is not about what we can afford as a nation — the Republican proposal makes that very clear.”

Most states have expanded access to mail voting in recent months in order to expose as few people as possible to the coronavirus pandemic, which is steadily expanding in rural areas as well as in those states that prematurely rushed a return to business as usual. Mail voting means that there may be delays in knowing the final election outcome this November.

Although mail voting has obvious advantages, especially because of the pandemic, it is important to remember that millions of voters will still find voting by mail inconvenient, difficult, or, in some cases, impossible. This is likely to include voters with disabilities or language barriers. Voters facing eviction may not be in a position to receive an absentee ballot.

Stacey Abrams, founder of Fair Fight Action and 2018 Democratic candidate for Georgia’s gubernatorial race, said during a call with reporters Monday that there need to be safeguards in place to guarantee access to mail voting, as well as early voting and conventional in-person voting on Election Day.

“This is a bipartisan concern — but unfortunately, without the federal funding and the federal guardrails this is going to be a very uneven election,” Abrams said. “If the Senate does not do its part, Americans will have to risk their lives to vote.”

US Postal Service’s Ability to Deliver in November Questioned

Delays in properly funding election infrastructure will very likely also result in delays when it comes to processing millions of mail ballots. Whether one approves or not, voting by mail is already a reality. Hundreds of thousands of voters have already requested mail ballots and even more are expected to do so.

As the number of coronavirus cases continues to rise across the country, understaffing election offices and frequently allowing them to be equipped with faulty ballot scanners is a recipe for disaster.

“A few of the critical needs for funding are drop boxes, recruitment of poll workers, scanners that can handle large numbers of paper ballots, postage for vote by mail ballots, increased funding for the postal service to be able to deliver voters’ ballots in a timely manner, and security of voting systems,” Butler said.

Under the best circumstances, Leah Greenberg, co-founder and co-executive director of the Indivisible Project, predicts there will be significant logistical and administrative challenges due to the pandemic. Greenberg’s group has found that discussions with voters tend to focus on basic questions about changing deadlines and processes for casting a ballot as much as on specific candidates.

“Our phone banks are pivoting to adapt to this reality, but it’s just an indicator of what the need is going to be in November in that one area alone,” Greenberg said. “Voter education can’t be left to volunteers — states will need support to make sure that voters can navigate their options clearly.”

The logistical challenges have only been made worse by President Donald Trump’s recent mixed messages concerning voting by mail. Interestingly enough, after denouncing voting by mail as an invitation to voter fraud, it turns out that given the choice, both Trump and Vice President Mike Pence prefer to vote by mail themselves. On Tuesday, Trump finally admitted that vote-by-mail and absentee voting are effectively interchangeable and encouraged Florida voters to request an absentee ballot. This came after a recent tweet slamming New York’s June 23 presidential primary election as “a total mess” because election officials had not yet finished processing absentee ballots. Election officials in New York City certified the final results of two key races Wednesday.

“Not only that, [Trump is] actively trying to destroy the Postal Service so that ballots can’t even be delivered,” Greenberg said. “Trump is leaving no stone unturned in his attempts to steal this election.”