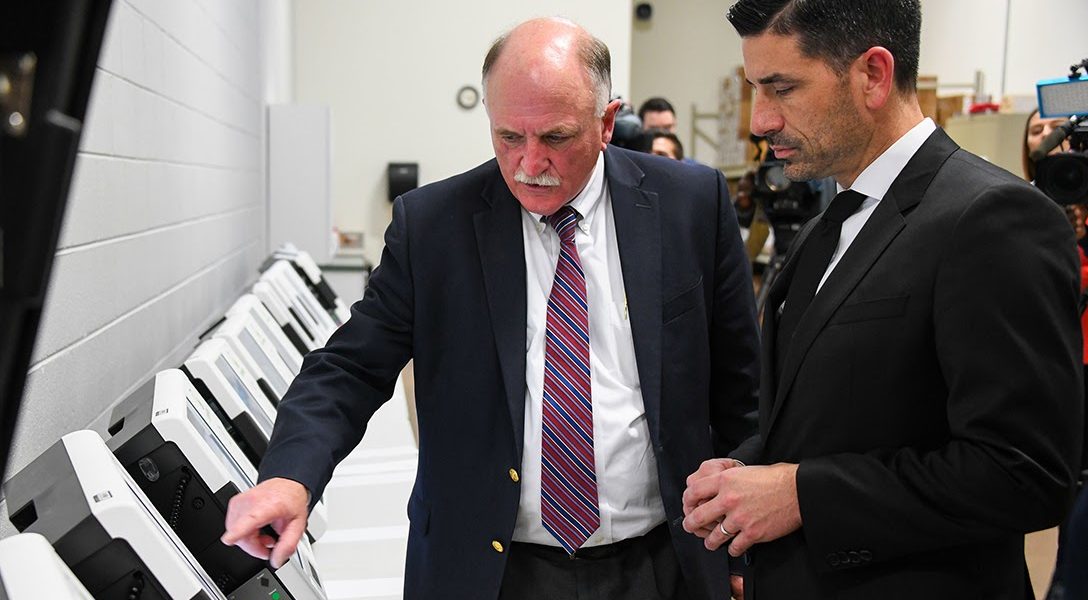 Election officials have long dealt with faulty and vulnerable voting machines, but this year, they are also grappling with the risk of spreading a deadly virus to hundreds of thousands of individuals who will cast a ballot in person this November.

While some states are beginning to make changes before the general election, a number of others will still require voters to use voting machines made with surfaces on which researchers say the coronavirus can linger for a number of days.

The Centers for Disease Control and Prevention (CDC) has even taken the rare step of wading into the debate on US elections. For the first time ever, the agency laid out on its website a number of public health guidelines for cleaning election equipment. But it is unlikely that a majority of voters are aware that some products, such as standard alcohol wipes, should not be used to clean a potentially contaminated voting machine.

Indeed, while alcohol wipes may give the voter a sense of safety, they actually can jeopardize the entire voting process.

Nearly every part of today’s election equipment is made from one of three materials: cardboard, plastic, or stainless steel. Thousands of voters will use the same voting machines and touch the same stylus pens set up at polling places across the country this November.

But because the coronavirus can linger nearly 24 hours on cardboard and up to two or three days on plastic or stainless steel, election officials are walking a fine line as they try to ensure access to the polls while also protecting thousands of voters expected to touch election equipment..

Elections that have been carried out so far amid the COVID-19 outbreak have shown that “traditional Election Day practices are not suited for a pandemic,” according to one recent report. In mid-April, the progressive group Free Speech for People partnered with public health and election experts, and published a guide on how to carry out safe elections amid a global health crisis.

This is not a hypothetical warning, experts note. Consider what happened in Wisconsin, after voters went to the polls last month.

Wisconsin officials reported dozens of confirmed cases of coronavirus in the days following in-person voting — especially in Milwaukee, a city that went from having 180 polling places to five, and where at least seven of the confirmed cases were tied to the state’s primary election.

The calls for expanding voting options, like no-excuse absentee voting and early voting, are personal for Rep. Gwen Moore (D-WI), whose son is immunocompromised and was almost forced to sit out the state’s primary election.

“My own son whose name was on the ballot in Milwaukee County on April 7 decided he would not leave his home to vote if his absentee ballot did not arrive in time,” Moore said. “By voting in person, he would have been risking his health and safety and that of highly susceptible people close to him.”

Moore’s son did eventually receive his absentee ballot in time to avoid having to travel to a polling place. For voters who are required to vote in person, however, there are still a plethora of touch points where they might be exposed to the coronavirus.

A number of states are slowly reopening — raising concerns that some officials are ignoring the threat of COVID-19 and creating the conditions for a second wave of cases. In Georgia, voters will use touchscreen voting machines sold by Dominion Voting Systems. Marilyn Marks, executive director of the Coalition for Good Governance, told WhoWhatWhy that her group filed a lawsuit regarding the safety of the state’s election equipment and said that one of her concerns is that voters might unintentionally use the wrong cleaning product on a voting machine.

If that were to happen, a machine could break down and create long lines at polling places while poll workers try to reboot it. Dominion sent officials a letter with guidance on how to clean its various machines earlier this year. The vendor made clear that its equipment must be completely powered down before it is sanitized, since cleaning solution may “alter the touch sensitivity of screens until the moisture is removed.”

But if voting machines were to be shut down and cleaned between every use, rebooting the machines could take a while — creating the long lines at polling places that election officials are hoping to avoid.

“I think people would naturally do it, and then if they’re behind the privacy booths so nobody can actually see if they were doing it, almost everybody will definitely do it,” Marks suggested. “Everybody’s carrying around alcohol wipes now.”

Ricky Hatch, clerk auditor for Weber County, UT, said that his office has come up with a new and novel solution for avoiding crowds: completely outdoor “paper at the polls.”

A majority of Utah voters already cast mail-in ballots in most elections. This year, election officials are working with local and state partners to provide in-person voters the option of driving to an outdoor polling place, where ballots and a disposable pen will be brought to their cars.

Meanwhile, during Ohio’s presidential primary last week, election officials established ballot drop-off locations, which were monitored hourly by Republican and Democratic staff. Implementing mail-in voting can take upwards of three years, but Ohio election officials did it in just 30 days, said Michelle Wilcox, president of the Ohio Election Officials Association and director of the Auglaize County, OH, Board of Elections, during a recent call with reporters.