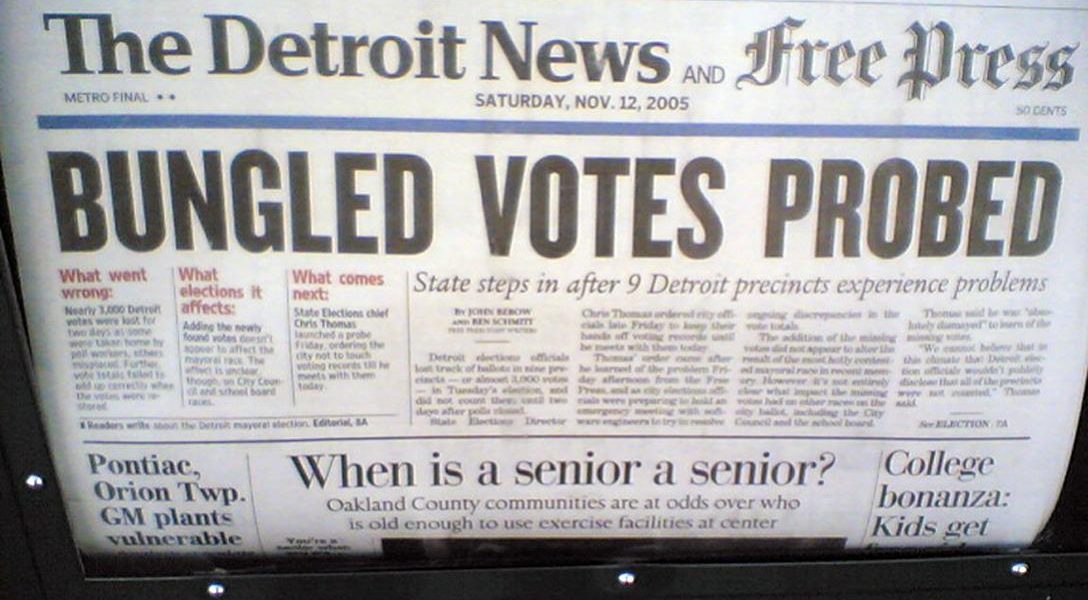 Voting problems are not new to Detroit. The cover of the Detroit News from November 12, 2005. Photo credit: jm3 on Flickr / Flickr (CC BY-SA 2.0)
Elections

Problems with voting machines in Detroit — where the population overwhelmingly preferred Hillary Clinton to Donald Trump — could doom the Democrat’s hope of reversing Trump’s slimmargin of victory in Michigan.

Residents — backed up by the clerk of Wayne County, which includes Detroit — are describing a chaotic process on Election Day, with would-be voters bedeviled by outdated, malfunctioning optical scan machines.

According to their accounts, the machines often jammed. This required voters to put their paper ballot through a second or third time. These false starts were supposed to be notated by poll workers so they could be discounted. But apparently many did not do so. As a result, scanners may have recorded more ‘votes’ than actual voters, resulting in entire precincts being disqualified from the recount.

At a minimum, a discrepancy between the number of pieces of paper recorded entering any particular scanner and the number of actual paper ballots associated with that precinct means that officials might have to skip recounts in those precincts.

Wayne County overwhelmingly supported Clinton, who received 519,444 votes there. Donald Trump got less than half (228,993). With Clinton trailing her rival by about 10,000 votes statewide, her best opportunities to make up the difference is in heavily Democratic areas like Wayne County. If they are excluded from the recount because of clerical errors made during the original count, then her remote chance of overturning the results will become even more of a long shot.

WhoWhatWhy contributor Tonya Shirelle in Michigan learned about these problems, and sometime later the first article on them was published in The Detroit News. But the accounts are confused, and it is unclear exactly how the problems played out, how they affected vote totals, and how they will impact the recount now underway.

WhoWhatWhy is seeking clarification and will share what we learn as soon as possible.