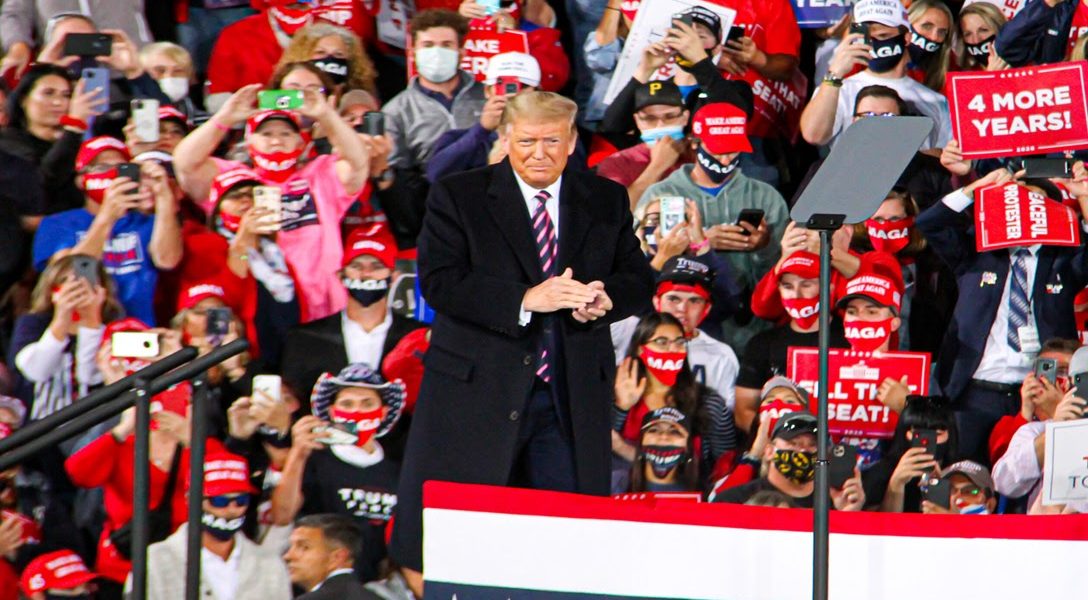 President Donald Trump speaks at a rally in Pittsburgh, PA, on September 22, 2020. President Trump enjoys stoking the enthusiasm of his crowds with bogus claims about the insecurity of mail-in ballots. Photo credit: © Niyi Fote/TheNEWS2 via ZUMA Wire
Elections

UPDATE, October 2, 2020: Luzerne County officials met with US Attorney David Freed, District Attorney Stefanie Salavantis, and investigators on Thursday, October 1. Investigators confirmed that ballot concerns were limited to the time period in which the independent contractor was employed and that no other issues were discovered. Officials say they are in the process of contacting all impacted voters.

September 26, 2020: Election officials are working double time to ensure that every properly submitted ballot is counted as absentee ballot processing errors are not waiting until November. In the swing state of Pennsylvania, controversy ensued after an independent contractor discarded military and overseas voters’ absentee ballots, leading officials to blame inadequate training and to promise greater oversight.

In Luzerne County, which has more than 200,000 registered voters according to the Pennsylvania Department of State, election officials blamed a “temporary seasonal independent contractor” in a statement Friday afternoon for incorrectly throwing a small batch of absentee ballots in the trash as they were sorting mail.

Nine ballots were ultimately affected by the contractor’s actions, seven of which were cast for President Donald Trump — who has been actively discrediting mail-in voting in recent months — according to a Thursday afternoon statement by the Department of Justice. Two ballots appeared to have been resealed, and their contents remain unknown. In 2016, Trump won the county by nearly 20 percentage points.

The first news about the discrepancy was apparently broken by Trump himself during a Fox News Radio interview on Wednesday.

“These ballots are a horror show. They found six ballots in an office yesterday in a garbage can,” Trump claimed. “They were Trump ballots … in a certain state and … they had Trump written on it, and they were thrown in a garbage can. This is what’s going to happen.”

The Luzerne County Board of Elections rebuked the announcement and claimed that staff “were unaware for whom the ballots were cast” prior to the Justice Department’s announcement.

“An error was made, a public servant discovered it and reported it to law enforcement at the local, State and Federal level who took over to ensure the integrity of the system in place,” said C. David Pedri, Luzerne County manager. “The Luzerne County voters should be assured that the election will move forward with transparency and integrity.”

The statement by the Luzerne County Board of Elections alluded to the contractor having inadequate training, and county officials said they will provide “supplemental extensive training to both full-time staff and temporary seasonal independent contractors.” A security camera in the Elections Bureau will also be used to “ensure that all staff are strictly adhering to proper procedures and protocols.”

Pedri said that the contractor was assigned to sort the mail received by the Elections Bureau, and Elections Director Shelby Watchilla immediately began an internal investigation and told the independent contractor not to return to their office.

Watchilla discovered the error on September 16, two days after the contractor began work, and made an official request to the Luzerne County district attorney for assistance. The Federal Bureau of Investigations and Pennsylvania State Police assisted in sorting garbage discarded during the period in which the contractor worked in the office. Officials said that the county is ”fully cooperating” with the investigation.

The FBI took “all items of concern” into custody, and election officials said that they will attempt to contact voters whose ballots were affected to process their votes.

Election officials across the country are reporting a historic surge in absentee ballot requests this year. But without enough funding to hire and train staff to process ballots, there are growing concerns about whether every properly cast ballot will be counted before the Electoral College is required to meet and cast their votes for president. Similar concerns about absentee ballot processing errors were raised in Michigan, another critical swing state, after 72 percent of precincts in the state’s largest county reported discrepancies in absentee ballot totals during the primary election.