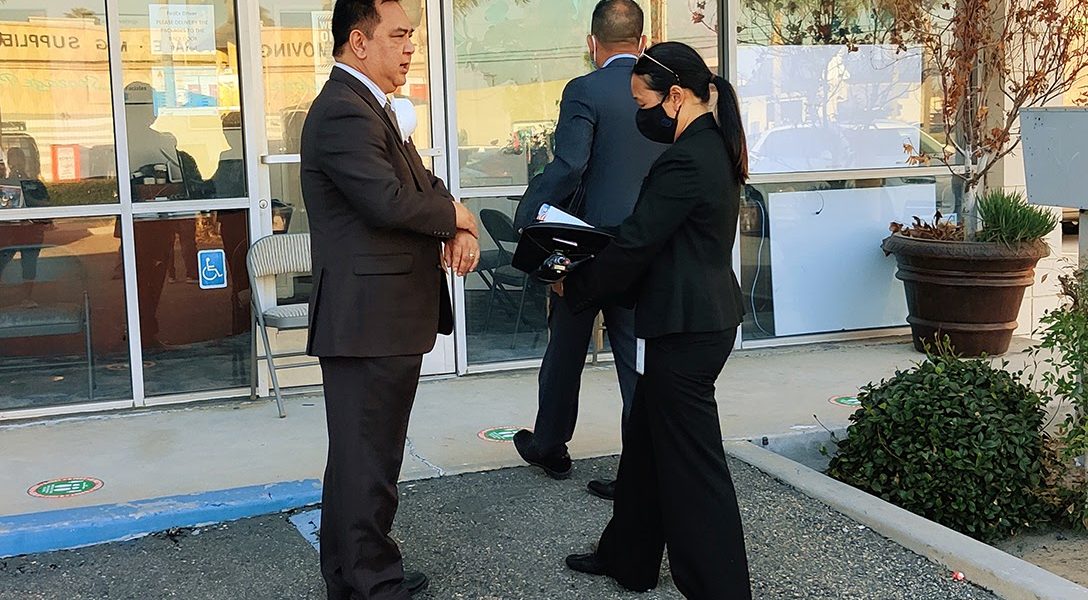 First there were the fake ballot drop boxes. Now, authorities in California are investigating a report of a phony, Republican-run voting site in an Orange County district where a GOP challenger holds a narrow lead over a Democratic congressman.

The county district attorney’s office sent investigators to the headquarters of the Republican vice mayor of the city of Westminster after voting-rights activists notified police on Election Day that they had discovered a handwritten sign saying “Vote Here” in front of the building, which was not listed as an official voting center.

The building, located in the city’s “Little Saigon” area, was, in fact, the dual headquarters of Vice Mayor Kimberly Ho’s (R) skincare company and her campaign for a seat on the Westminster city council.

Ty Bailey, spokesperson for the group Clarity OC, told WhoWhatWhy that he was prompted to check the status of the building with the Orange County registrar of voters after he saw people enter with ballots and leave with “I Voted” stickers that were different from official ones.

Bailey took a video of two men exiting the building wearing “Michelle Steel for Congress” shirts while attempting to throw out a box of what Bailey says looked like ballot envelopes.

These are the people running a fake Voting Center in Westminster, CA.

They are throwing away voters’ ballots in a primarily POC area of the county. #Election2020 pic.twitter.com/hRCTxBwRpp

Michelle Steel is a Republican running in California’s 48th Congressional District. As of this writing, she is leading Democratic incumbent Harley Rouda 50.7 percent to 49.3 percent, with 98 percent of the vote counted. The Steel campaign has yet to respond to media inquiries.

Kimberly Edds, the Orange County district attorney’s public information officer, told WhoWhatWhy that the office’s investigation has yet to uncover anything illegal, and so far has discovered only some outer envelopes and return envelopes for ballots. She said that the district attorney’s office would continue to look into any “improper activity” that “might have interfered with the election” but declined to comment further.

Edds noted that the district attorney’s office had formed an election integrity task force before voting started so that it could respond rapidly to issues like this one.

Van Tran, former assemblyman and Vice Mayor Ho’s attorney, told the Los Angeles Times that the Ho campaign was merely providing a service to the Vietnamese community by delivering ballots and providing language assistance and information. “Everything we do,” he said, “we do within the confines of the law.”

So-called ballot harvesting is legal in California, which has adopted some of the nation’s most inclusive laws regarding ballot collecting, including allowing a third-party collector to be a campaign member and even help people fill out ballots. But the third party may not impersonate an official poll worker or mislead voters into thinking that they are voting immediately rather than leaving ballots with someone else to be delivered later.

The new rules led to issues last month when California Secretary of State Alex Padilla ordered the California GOP to remove multiple unauthorized drop boxes, including in Orange County, in part because many had been labeled “official.” Padilla cited concerns about the security and monitoring of the drop boxes, and he also maintained that the labels could sow confusion.

For the Orange County district attorney, a decision on whether Ho and Steel violated laws might depend in part on the words they used to draw in voters. “Vote Here” in front of the Ho headquarters was accompanied by another sign that read “Ballot Room” in Vietnamese — the same term used in official Vietnamese-language voter information.

In addition to the signs, advertisements paid for by California State Assemblyman Tyler Diep (R) ran for weeks before Election Day on Vietnamese radio and TV stations urging support for Michelle Steel and providing the address of the strip mall where Ho’s headquarters are located.

At a press conference at Westminster City Hall on November 5, Justin Frazier, Clarity OC’s founder, accused Kimberly Ho and her staff of impersonating poll workers and demanded a federal investigation into the incident. He called for Ho to resign and for Steel to condemn what took place on Election Day.

Frazier, a full-time activist, said he specifically wanted to refute Tran’s claim that his group had planted the “Vote Here” sign and to clarify that his group is not affiliated with any party or campaign. “I just hope the people win on this one,” he said.