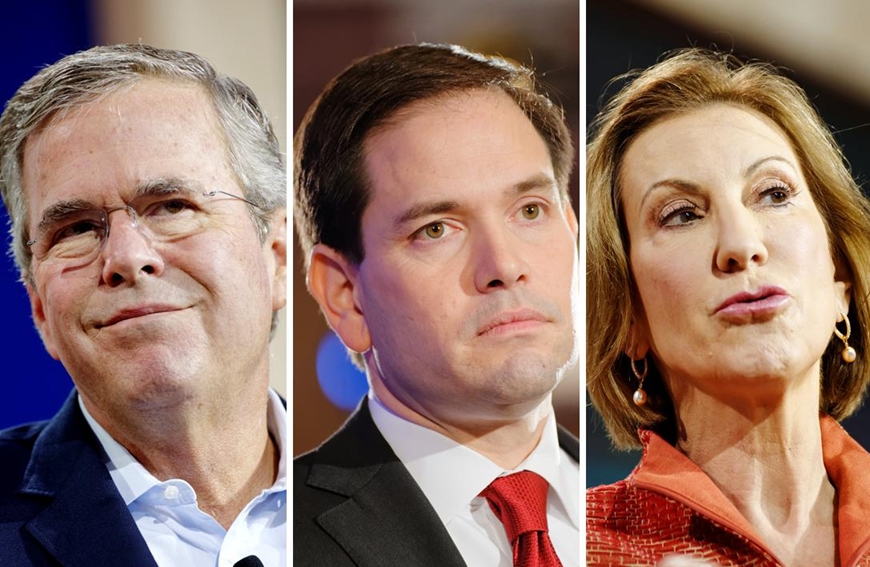 Jeb Bush, Marco Rubio and Carly Fiorina did not succeed in buying the election — but they provided a roadmap that someone else can follow to do so in the future.

Their campaigns were largely forgettable, but all three of them — and their Super PACs — have rewritten the rulebook on how far candidates can stretch campaign finance rules.

Since any enforcement of the law is unlikely, the damage they have done could end up being felt for years to come.

Jeb Bush disappointed the public and upended his clan’s track record of electoral victories — but he did know how to raise cash from elites. And though all that cash could not make up for his personal faults, the ways he raised money may nonetheless have created, longterm, still more opportunities for wealthy donors to dominate American democracy.

Long before Bush officially entered the race, he, his team, and his backers changed the spending formula. Thanks to loopholes discovered by operatives supporting his candidacy, Bush raised more than $100 million for his Super PAC, without normal campaign finance limits.

He did this by disingenuously pretending that fundraising was unrelated to his presidential campaign.

In early 2015, the Bush campaign began to implement what was referred to as a “shock and awe” strategy. The hope was that the former Florida governor would obliterate the competition through rampant fundraising, raising enough money to scare off potential competitors and make him the frontrunner in the eyes of the media.

But the Federal Election Commission (FEC) limits individual primary contributions to $2,700. The $100 million that Bush’s team planned on raising would likely take too long to make their deadline. And while the 2010 Citizens United Supreme Court decision allowed for the creation of Super PACs, which can raise and spend unlimited funds for use in an election, those groups are legally forbidden from coordinating directly with candidates for public office.

This posed a problem for Right To Rise USA, a Super PAC founded by longtime Bush allies. The law blocked them from taking advantage of Bush’s family and personal ties with Republican Party donors, since the former governor could not fundraise for the PAC himself.

The clever workaround for the Bush team was to raise money by pretending that Bush was not a candidate for public office. He was just a private citizen, personally raising millions of dollars for a nonprofit he happened to support, supposedly unsure if he would ever declare his candidacy for president.

That candidacy eventually fizzled. “Shock and awe” ended up merely “shocking” the people who gave Bush piles of money and “awing” observers in how little he accomplished with it.

But even if Bush’s run for office did not succeed, his underhanded fundraising tactics absolutely did. Right To Rise USA raised $119 million for Bush, and spent $103 million of that on his race. The money did little to make Bush president, but it did an awful lot to open up the doors of campaign finance rule-breaking.

The campaign and Super PAC barely hid what they were doing at the time. Bush, on multiple occasions, made slip-ups and barely dodged questions about what was going on.

“The situation has gotten bad enough with the campaign that this really looks like a knowing and willful violation,” the campaign lawyer Larry Noble told WhoWhatWhy at the time. Noble is general counsel for the Campaign Legal Center, a watchdog group that joined in with Democracy 21, another watchdog group, in filing a complaint against the Bush campaign with the Department of Justice.

But with Bush’s campaign in the rearview mirror, it seems that even lawsuits did not prevent the campaign from exploiting the loophole, and there is nothing to stop future campaigns from trying similar tactics.

While Super PACs can raise money beyond the limits set up by Congress, they are at least required to disclose the names of their donors. Any individual can go to the FEC’s website and look through a list of people who have donated to the group.

But supporters of Marco Rubio’s candidacy managed to get around that requirement.

A non-profit group called the Conservative Solutions Project spent more than $8 million dollars in advertising support for Rubio’s run for president. That money was part of the $16 million that the group raised.

But because the Conservative Solutions Project claimed 501(c)(4) “social welfare” status in its tax filings, stating that less than half of its spending is on political concerns, it does not count as a political group — and therefore is not required to reveal its donors.

The group claimed it does not have anything to do with Rubio or even the election — despite sharing staff with Rubio’s Super PAC, and featuring the senator on its website. It claimed that the ads were merely informing the public about specific issues, such as those featuring Rubio, and no other presidential candidate, railing against the Iran Deal.

The Campaign Legal Center and Democracy 21 wrote a letter to the Justice Department requesting a thorough audit of the group’s finances. But the ads have already aired, and the money has already been spent, and Rubio’s candidacy has come and gone. If the Justice Department acts, it will be well after the Conservative Solutions Project has eviscerated what remains of campaign finance regulation.

For all the tricks that candidates have found to raise money outside of the regulations placed on their campaigns, they have remained hindered in their ability to do the same for their campaign committees themselves.

Even if Super PACs are able to take the lead on certain types of campaign spending, like advertising and mailers, the official campaign committee still had to pay for things directly involving the candidate, such as setting up events, and travel. Since a campaign is legally barred from coordinating with a Super PAC, it would seem impossible for outside groups to take the lead in paying for these types of expenditures.

It created a publicly available Google Calendar showing the former CEO’s full schedule, allowing the Super PAC (and anyone else who wanted) to see it and plan accordingly. It even left gaps for when Fiorina planned to be in a certain state, allowing events to be planned wholly by outside groups.

When Fiorina attended these events, her campaign would frequently find the full set-up already complete, handled wholly by the Super PAC. Placards and posters would cover convention halls, placed on tables rented by the Super PAC.

Already, this workaround is becoming standard practice. The Washington Post reported that a Super PAC supporting Ted Cruz, Keep The Promise, has behaved the same way. It plans the events, and sets them up with staffers and placards ready for voters. Cruz is invited as a special guest, allowing his campaign to hold events without cutting into its war chest.

No End in Sight

These are not the only tactics that political operatives have used to skirt the regulations on campaign finance. A watchdog group called the Citizens for Responsibility and Ethics in Washington filed a complaint with the FEC against a Limited Liability Corporation that hid a donor’s name when giving money to Marco Rubio’s Super PAC; the watchdog group claims the Super PAC broke election laws about “contributions in the name of another.”

A complaint like this is unlikely to make a difference, given the dysfunctional nature of the Federal Election Commission. In a recent exclusive interview with WhoWhatWhy, the former chair of the FEC bemoaned how useless her own agency has become in enforcing the rules of our elections.

“Nothing will happen,” commissioner Ann Ravel told WhoWhatWhy. “And I don’t see it improving. At all.”

Campaign finance has become a major issue in the presidential election. Both Bernie Sanders and Donald Trump have made headway by frequently attacking their competitors for their campaign contributions from wealthy donors. They have argued that those wealthy donors have an undue influence in politics, making politicians lose touch with regular voters.

But despite this rhetoric from Sanders and Trump, meaningful campaign finance reform may still be a long ways away. Only 1.5% of questions in presidential debates involved questions about campaign finance, according to an analysis by Public Citizen.

Despite all his talk, Donald Trump has outlined no policy position on how to get money out of politics. Bernie Sanders and Hillary Clinton (who herself has found some exciting new loopholes in the rules) have outlined positions calling for reform. Both say that a Constitutional amendment is needed to ensure that rulings like Citizens United are not the law of the land.

Numerous campaign finance Constitutional amendments have been proposed in Congress. At no point has any even made it to a vote.

In the meantime, the American electoral system is left with the hodgepodge of regulations, court decisions, and uneven enforcement that has led to this near free-for-all.

“Every time there is a law or court decision, the candidates and their lawyers find new ways to either work around them or make maximum use of them,” Viveca Novak, the communications director for the non-partisan Center for Responsive Politics, told the Tampa Bay Times. “Their creativity knows no bounds.”

Bush, Rubio, and Fiorina all failed in their attempts to use campaign loopholes to win the election. But they each proved that campaigns can find novel ways of getting around the law.

The presidential election in 2012 was the first in which Super PACs played a major role, after the 2010 Supreme Court decision that opened the floodgates to new sources of money in politics. Four years later, we are seeing this radical adventurism in how to abuse the current patchwork of rules.

What kind of campaigns will we see in 2020? If a campaign follows through on the promise showed by Bush, Rubio and Fiorina, we may see a campaign that raises unlimited funds, does not disclose its donors, and spends however it pleases.

Or, there may be even newer loopholes exploited that we cannot see coming.