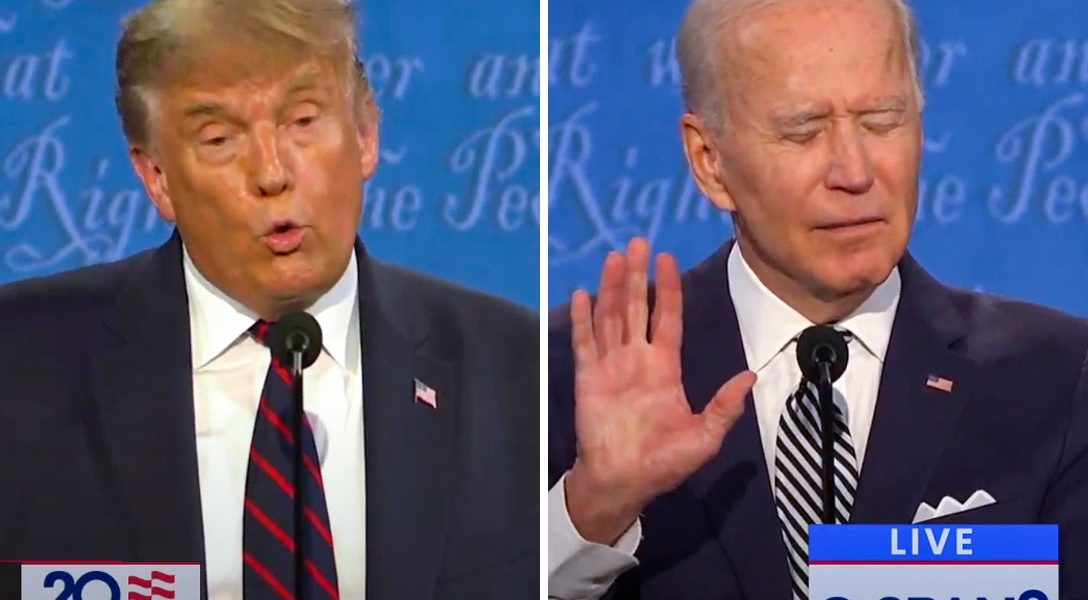 The first presidential debate between President Donald Trump and former Vice President Joe Biden was like a cage fight between two mixed martial arts fighters. Within minutes, both candidates had launched an all-out shouting match.

In spite of the chaos and bluster, the candidates could not have been further apart when describing where they stand on the integrity of the 2020 election, one of the most crucial questions raised during the evening. Trump suggested that if he lost the election, it would be because the process had been rigged. Biden countered that once every vote had been counted, the winner would be clear. He added that voting by mail is safe, is already used by a number of states, and has been in use for years without any sign of significant fraud.

Trump, nevertheless, aggressively repeated his claims that widespread voter fraud by mail does exist. To prove his point, he cited a recent incident in Pennsylvania, where election officials recovered and said they intend to count nine absentee ballots that were accidentally discarded by a seasonal worker.

“They found them in creeks,” Trump charged. “They found some with the name ‘Trump’ … just the other day in a waste paper basket.”

Trump also criticized universal mail-in voting several times, attempting to make a distinction between officials automatically mailing ballots to registered voters and the alternate approach in which voters need to request a ballot. Trump insisted repeatedly that ballots should only be sent to voters who request them. Biden pushed back, charging Trump with attempting to muddy the election outcome’s integrity.

“This is all about trying to dissuade people from voting because he’s trying to scare people into thinking it’s not going to be legitimate,” Biden said.

Five states — Colorado, Hawaii, Oregon, Washington, and Utah — have offered universal mail-in voting for more than a decade. None have reported instances of widespread voter fraud. California, Nevada, New Jersey, Vermont, and the District of Columbia also intend to mail registered voters a ballot. John J. Farmer Jr., director of Rutgers University’s Eagleton Institute of Politics, told WhoWhatWhy that one concern this year is not voter fraud but whether election officials in states that have not typically seen a large number of mail ballots can carry the burden of processing the historic number that have been requested.

“Not every state has employed it, but [some] states have with no measurable impact of fraud and no one questioning the reliability of the votes,” Farmer said.

Biden pointed out during the debate that Trump’s messaging about absentee voting has been inconsistent at best. Biden noted that Trump had filled out an absentee ballot himself “behind the Resolute Desk” during Florida’s primary election. Farmer said he too was puzzled by the president’s rhetoric and questioned whether election integrity is even a “major issue” for him.

“On one hand, he’s perfectly comfortable voting by mail in Florida,” Farmer said. “But in other states, he’s raised the issue of whether it’s reliable or not.”

A common concern among election experts is whether officials have adequately assessed Russia’s attack on the 2016 presidential election and taken steps to address the possibility of foreign interference in 2020. With so much focus this year on efforts to dismantle the US Postal Service, allegations of voter suppression, and intense scrutiny on absentee voting, Farmer said that it made sense to have election integrity be among the topics discussed during the first presidential debate.

“[It’s] an indication of how concerned people are after what happened in 2016,” Farmer said.

When asked whether he would accept the final outcome of the November election, Trump would not give a full-throated commitment. Instead, he argued that election officials are not equipped to handle absentee ballots and provide accurate results. Indeed, election offices across the country are cash-strapped and have been for years. The House of Representatives approved $3.6 million earlier this year in election assistance, but the Senate has yet to bring the bill to a floor vote.

Trump also claimed that the outcome may have to be decided by the courts. He said that he hopes the Supreme Court does not have to decide the outcome, but it could very well get to that point.

The Trump campaign and Republican-backed groups have filed several lawsuits across the country regarding what kind of ballots should be counted and for how long they should be accepted. One of the most common areas addressed by the lawsuits is whether ballots postmarked before November 3 should be counted if they are received after Election Day.

“He’s just afraid of counting the votes,” Biden claimed. “[Trump] can not stop you from being able to determine the outcome of the election.”

Voting-rights organizations and election experts across the country have emphasized equipping  voters with information on how to properly cast an absentee ballot and on where to vote in-person on Election Day. Eagleton’s Center for Youth Political Participation created an interactive map with information on how to verify whether a voter is registered, deadlines for registering, and how to request a ballot, as well as the various ways to vote in their state.