This story is the second part of a series on Armenia’s parliamentary elections. Click here for Part 1.

Kocharyan’s alliance had been widely expected to narrowly lead in Sunday’s snap vote in what had emerged as Armenia’s most fateful and unpredictable parliamentary race. Pashinyan’s landslide victory gives him a majority in Armenia’s unicameral parliament. He will now have carte blanche for what he calls “purges” and “vendettas” against his foes that may enrage Moscow, Armenia’s biggest ally.

Opponents had accused Pashinyan of treason after he swapped top-secret maps of landmines in the Nagorno-Karabakh enclave for several dozen haggard youngsters in torn uniforms. The maps saved the Azerbaijani government in Baku tens of millions of dollars in demining efforts and sped up the return of refugees uprooted in the early 1990s by the first open war between the two ex-Soviet nations.

Pashinyan affirmed on Facebook that his Civil Contract Party will form a newly elected government and constitutional majority. He immediately headed to a monument to the soldiers who died in the Nagorno-Karabakh conflict that was long considered a “frozen,” unsolvable political stalemate.

Last Tuesday, Kocharyan told the Russian RIA Novosti news agency that he “can’t completely rule out” a civil war over the election results.

Kocharyan’s alliance refused to recognize Pashinyan’s victory, claiming in a statement on Monday that it received “hundreds” of complaints allegedly proving “a systematic, pre-planned falsification of election results.”

Last Tuesday, Kocharyan told the Russian RIA Novosti news agency that he “can’t completely rule out” a civil war over the election results.

However, observers from the Organization for Security and Cooperation in Europe (OSCE) said the vote was free and fair.

According to analysts, Pashinyan’s unexpected victory was brought on by previously undecided voters, more than a third of whom had not made up their minds until the last minute when they voted against Kocharyan’s political return.

“The scale of the victory was certainly unexpected, since the election was unpredictable until the very end,” Kevork Oskanian, an honorary research fellow at the United Kingdom’s University of Birmingham, told WhoWhatWhy. “It appears the vast majority of those voters ultimately decided to vote for Pashinyan — or, perhaps more accurately, against Kocharyan.”

Kocharyan headed Nagorno-Karabakh in the mid-1990s, after the war that claimed more than 30,000 lives and displaced up to a million, mostly from seven Azeri-dominated districts that surround Nagorno-Karabakh and link it to Armenia. Many refugees from both sides ended up in Russia, forming large and affluent diasporas. 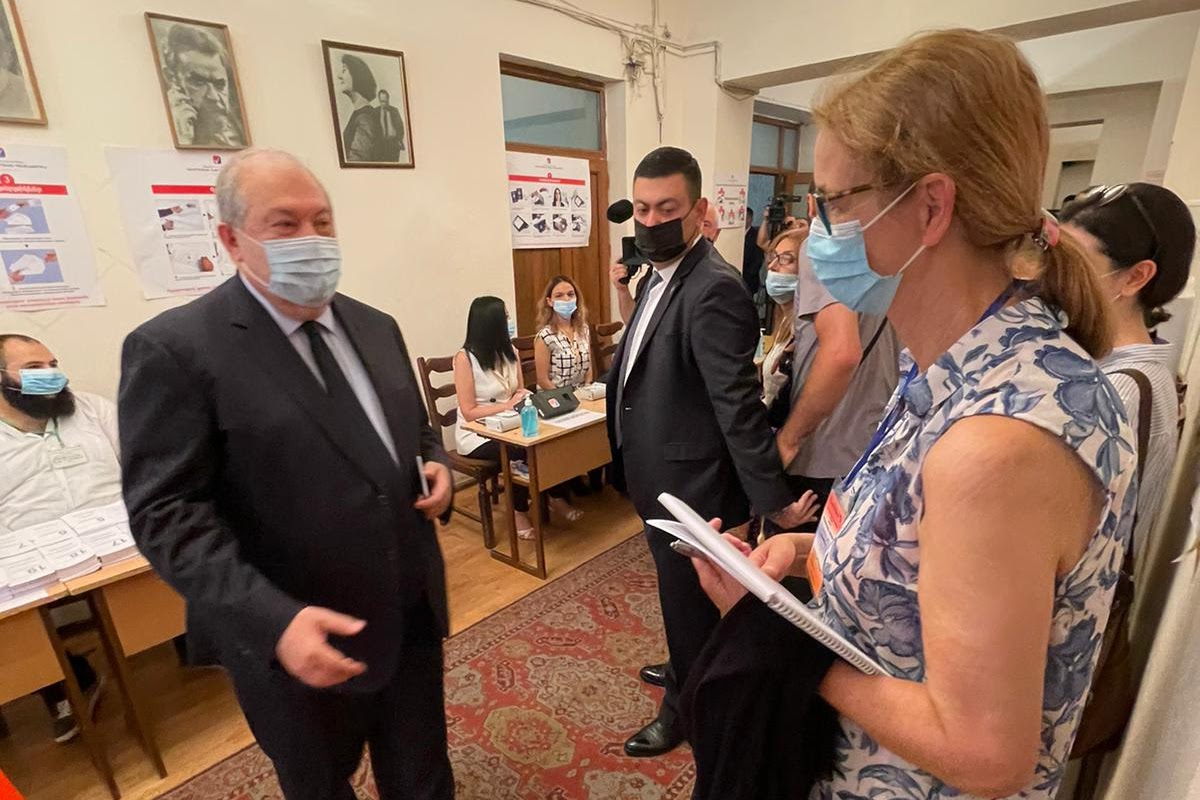 The Organization for Security and Cooperation in Europe (OSCE) Parliamentary Assembly Head of Delegation Kari Henriksen greets Armenian President Armen Sarkissian in a polling station in Yerevan on June 20, 2021. The OSCE was on the ground in Amerina to monitor the election, and determined the vote was free and fair. Photo credit: OSCE Parliamentary Assembly / Flickr (CC BY-SA 2.0)

Between 1997 and 2008, Kocharyan was elected Armenia’s president. He brought a so-called “Karabakh clan” to power in Armenia and became a close ally to Russian President Vladimir Putin. Kocharyan’s rule was marked by an economic boom, but critics accused him of corruption and of suppressing opposition.

Kocharyan hand-picked Serzh Sargsyan, another Nagorno-Karabakh native, as president — and ordered a violent breakup of rallies that protested election results.

Under Pashinyan’s rule, Kocharyan was charged with orchestrating the breakup, but was acquitted in April after what was widely rumored to be a personal request from Putin.

Azerbaijan is cautious about Pashinyan’s victory because it had already pinned too much hope on Pashinyan when he came to power in 2018. But his attitude on the recently lost parts of Nagorno-Karabakh has been less aggressive than that of Kocharyan, who has signaled he may have been willing to resume fighting to regain the territory.

“In any case, his party’s victory is a positive signal for Baku that proves the defeat of revanchist forces and the thwarting of Moscow’s plan to return Kocharyan to power,” Baku-based analyst Emil Mustafayev told WhoWhatWhy.

Moscow didn’t appear to oppose Pashinyan, nor prefer any particular candidate. Pashinyan has espoused pro-Western views, but throughout his leadership has recognized Armenia is dependent on Russian military, economic, and political backing. 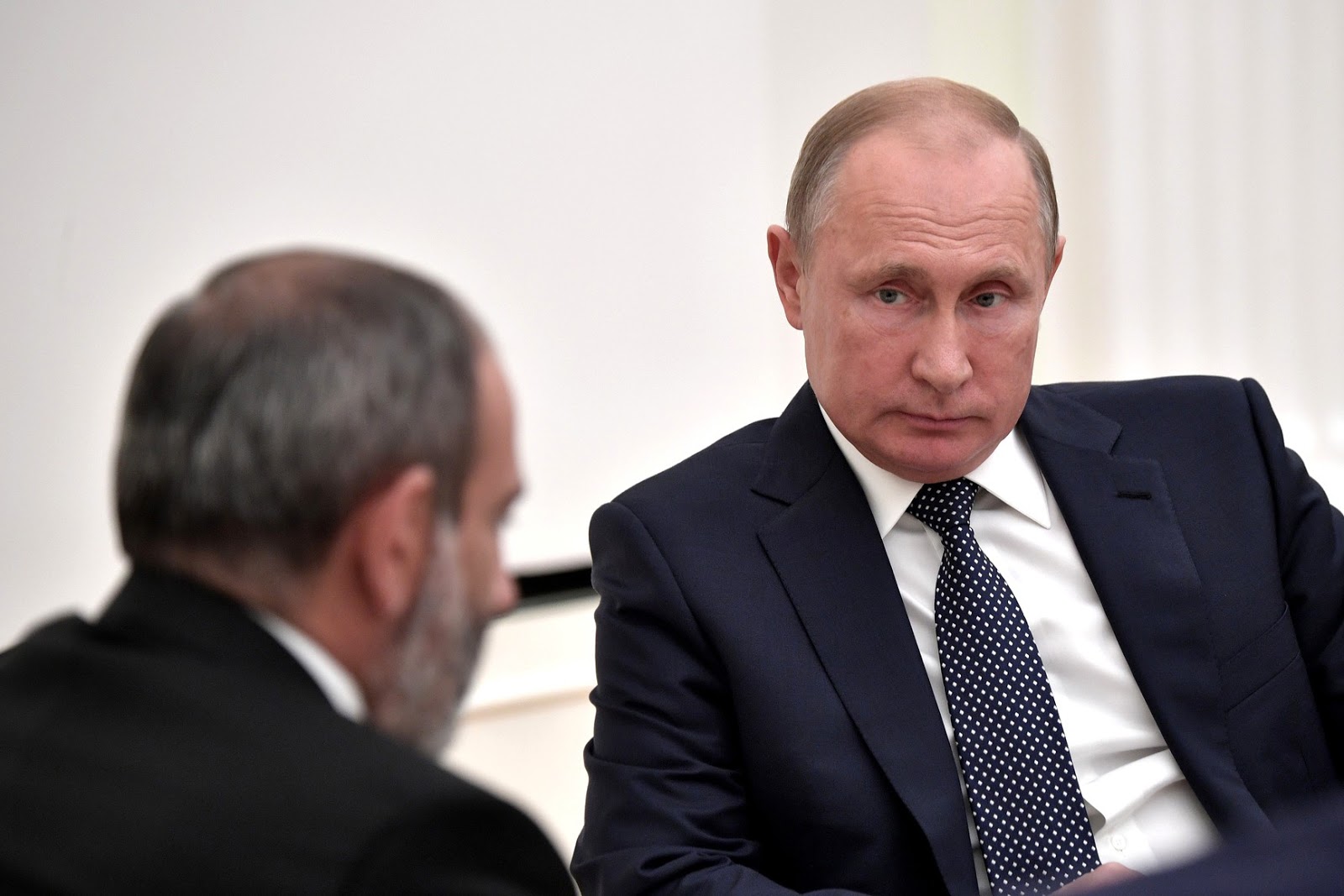 Meeting of Prime Minister of the Republic of Armenia Nikol Pashinyan and Russian President Vladimir Putin in Moscow on June 13, 2018. Photo credit: President of Russia / Wikimedia (CC BY 4.0)

Addressing his party, Pashinyan thanked Putin for “supporting Armenia and the Armenian people” and pledged to “further develop” ties with the Moscow-led Collective Security Pact of several ex-Soviet nations.

There was a touch of irony in this statement. Under the pact, Moscow could have backed Armenia in last fall’s blitzkrieg. Russia sat out the war, saying the pact only applied to conflicts fought on Armenia’s soil, not in the separatist areas.

Instead, Armenian and separatist forces relied on obsolete Russian-made arms and tactics they mastered in the 1990s. They moved around in large groups that were vulnerable to drone attacks, and barely disguised their artillery and tanks.

Azerbaijan won the war largely because of expensive, sophisticated weapons, especially Turkish-made laser-guided drones and new stratagems battle-tested in the Middle East after the Gulf war.

These days, Armenia and Nagorno-Karabakh are too discouraged and weak for any warfare.

“The morals are weakened, and the Armenian public is not motivated to [resume] the war,” Pavel Luzin, a Russian-based defense analyst with the Jamestown Foundation, a think tank in Washington, DC, told WhoWhatWhy.