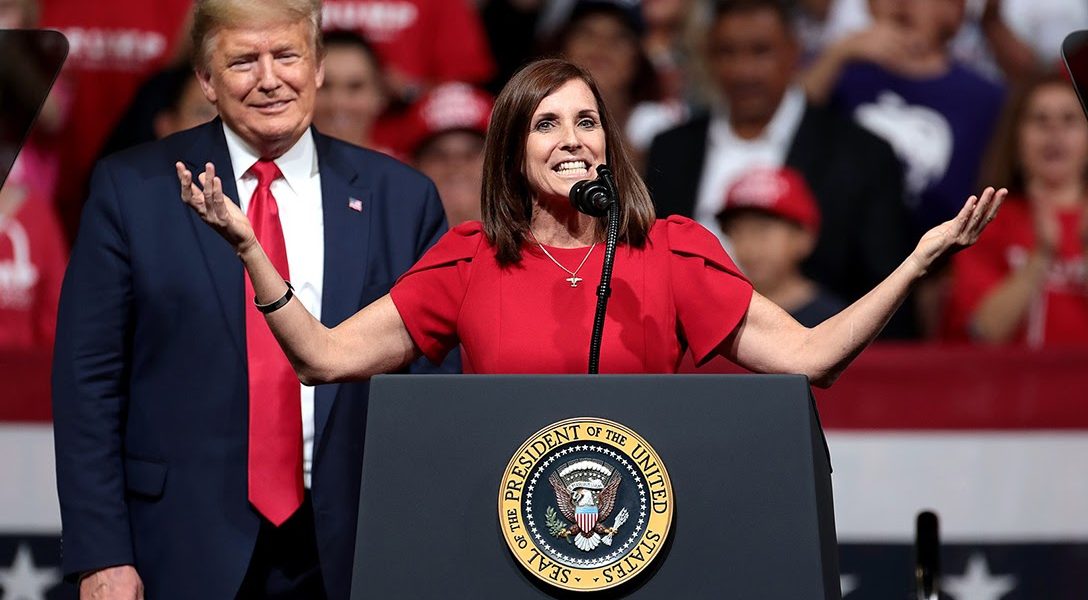 Donald Trump’s core supporters may think he’s the greatest. Arizona voters are not that sure. Republican Senator Martha McSally, who is up for reelection in November, spent most of last week working hard to distance herself from the increasingly troubled White House.

Debating her Democratic challenger, Mark Kelly, McSally dodged a question about supporting Trump, ducked another question concerning the president’s handling of the COVID-19 pandemic, and denied having voted to strip funding for preexisting health conditions. McSally then took issue with the president’s attacks on the late Arizona Senator John McCain.

If the polls are right, Arizona is currently projected to vote blue for the first time since the 1996 reelection of Bill Clinton. The website FiveThirtyEight has Trump consistently trailing Joe Biden by an average of 4 percent in various polls. Meanwhile, McSally is even further behind Kelly, an astronaut and the husband of former Arizona Rep. Gabby Giffords. The latest polls by Ipsos/Reuters, the New York Times/Siena, and CNBC/Change Research show McSally trailing Kelly by 10, 11, and 8 points, respectively.

McSally’s depressing poll numbers have hit just as GOP leaders, led by Senate Majority Leader Mitch McConnell, are scrambling to fill the Supreme Court seat left vacant upon the death of Ruth Bader Ginsburg. McSally was appointed to fill Jon Kyl’s seat after the senator’s resignation in 2018, triggering a special election this year. According to Arizona law, the winner of this election can be sworn in as early as November 30. This means that if Kelly wins, and McConnell hasn’t already succeeded in filling the Supreme Court vacancy, his vote in the Senate could potentially affect the confirmation of President Trump’s Supreme Court nominee, Amy Coney Barrett.

The first question in Tuesday’s debate, sponsored by the Arizona Citizens Clean Election Commission, concerned Trump’s handling of the coronavirus pandemic. McSally gave an indirect answer, instead criticizing Kelly for his business arrangements with China and his association with “one of the most radical political organizations in history.” It was later revealed that McSally was referring to the gun control organization founded by Kelly and Giffords, who was critically injured after being shot in the head during an assassination attempt in 2011.

When pressed repeatedly on whether she was proud of her support for the president, McSally said she was “proud to be fighting for Arizonans.”

Throughout the debate, the senator repeatedly dubbed her opponent “Counterfeit Kelly” due to his reluctance to label himself as either a politician or a Democrat despite being, in McSally’s words, “bought and paid for by Chuck Schumer, whose path to power goes through Arizona.”

Kelly kept his focus on the moderators’ questions and stressed his goal of “independent leadership” for Arizona. He has repeatedly criticized partisan politics as divisive and uncompromising.

When asked about whether she voted to take away funding for preexisting health conditions, McSally vehemently denied doing so, though her record states the contrary. In 2015, she voted to repeal Obamacare, which protects individuals with preexisting conditions from being discriminated against by insurance companies.

McSally drew heavy criticism on Twitter for her pointed remarks aimed at Kelly’s supposed endorsement from Rep. Ilhan Omar (D-MN) and other members of “The Squad,” four congresswomen known for progressive policies. She cited a picture in which Kelly has his arm around Omar and dubbed him “far-left.”

When the conversation turned to Trump’s criticism of former Republican Arizona Senator John McCain, Kelly was quick to denounce the president’s remarks. McSally responded that she has told President Trump many times to stop his critiques of the late senator.

On the topic of climate change, McSally moved closer to the president’s corner. She made it clear that she opposes the Green New Deal, and she alleged that Kelly supports banning fossil fuels, a position he promptly refuted and labeled as inconsistent with his career as a Navy pilot. Kelly reiterated his opposition to the Green New Deal, stating, “There’s a lot of stuff in there that has nothing to do with climate.”

McSally charged that Kelly favors letting criminals sue police. In response, Kelly emphasized his respect for police officers but stressed the importance of police accountability and oversight in cases of “clear wrongdoing.”

Both candidates describe themselves as avid supporters of the Second Amendment, albeit with different views on how to take public safety into account while maintaining individual liberties. Kelly stressed his support for stricter gun laws and universal background checks, citing the prevalence of school shootings and the government’s failure to impose adequate safety measures over the past few years. Initially, McSally failed to answer when asked if she is for stricter background checks. She chose instead to imply that Kelly does not support Second Amendment rights. When asked again, she said she was currently working on legislation to fix the current background check system.