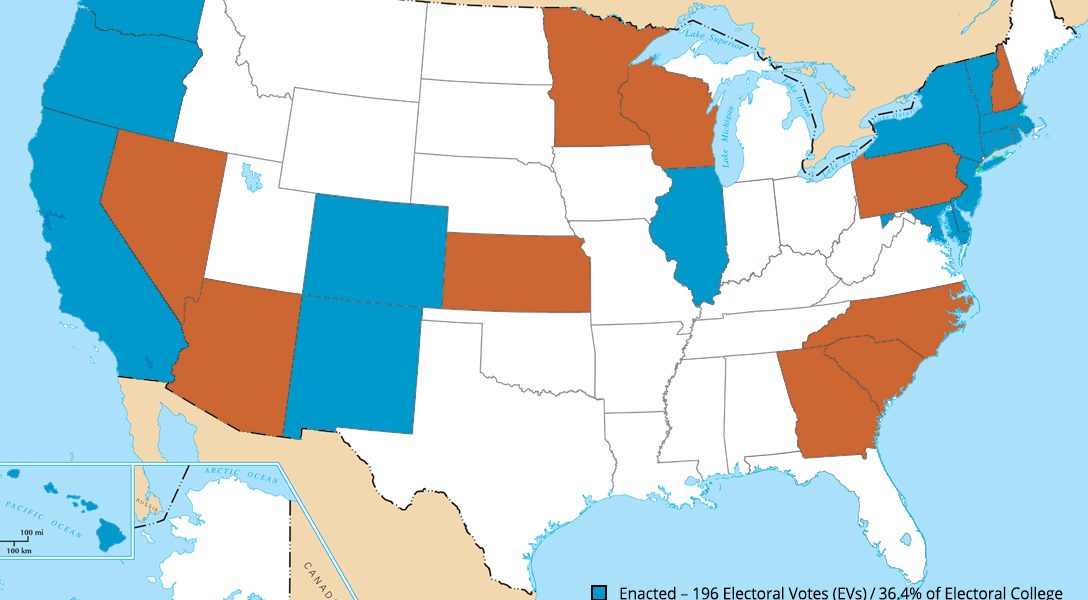 The Electoral College, which allowed the past two Republican presidents to win office with fewer votes than their opponents, has officially become a joke.

In a skit last week, Saturday Night Live lampooned how the US is picking its leaders by highlighting the fact that most voters have no say in who will become president. But the Electoral College is no laughing matter.

As long as the same person won the popular vote and the Electoral College, this wasn’t a problem. But with the last two Republicans owing their election to an antiquated system and not the support of a majority of voters, it has dawned on many Americans that something is amiss — especially because things seem to be getting worse.

If recent history is any indication, this is not just a problem for the loser but also for the winner. The former will miss out on being president despite getting more votes, while the latter has to live with questions about their mandate — or even their legitimacy.

George W. Bush lost the popular vote by a few hundred thousand votes when he first became president. Donald Trump lost by nearly 3 million votes. And there is no doubt that this discrepancy has been hanging over his presidency.

So it’s no wonder that Americans are increasingly frustrated with the current system.

The Movement for a National Popular Vote

While the number of Americans who oppose the Electoral College has risen, efforts to scrap the system have been hampered by the lack of consensus on what a national popular vote should look like. Some want to scrap the entire system to prevent a repeat of the 2016 presidential election, but others believe that the National Popular Vote Interstate Compact (NPVIC), which 15 states and the District of Columbia have passed, is the best solution.

Scott Drexel, a national spokesperson for National Popular Vote, a nonpartisan organization working to pass the agreement, told WhoWhatWhy that the NPVIC would bolster already existing authority that states have under the Constitution to determine how to allocate Electoral College votes. Most recently, Oregon’s Democratic Gov. Kate Brown signed the compact into law in June.

“A lot of people, you kind of lose them, both conservative and left leaning, the minute you start saying we’re going to abolish the Electoral College,” Drexel said.

The compact, Drexel added, addresses what he views as the root cause of why so many Americans are frustrated with the Electoral College — the winner-takes-all system. Currently, 48 states give their Electoral College votes to whichever candidate wins the statewide popular vote.

The biggest challenge, said former California state Sen. Ray Haynes, who has spent years working to put in place the NPVIC, is what he calls the problem of the battleground states. In any given presidential election, there are about eight to 12 swing states that candidates pour their time and resources into — giving just 20 percent of the population meaningful input on an election.

Under the compact, candidates would need to campaign for every vote, in every state.

“I think that makes the country stronger, and it makes more people feel like they’re actually participating in the election for the President of the United States,” Haynes contended.

Advocates of the NPVIC also argue against pursuing a Constitutional amendment to abolish the electoral college and institute a direct national popular vote when the power to reform how the Electoral College works is provided in the Constitution itself.

“I think it’s naive that you can assume that you can do that because that requires a two-thirds vote in both Houses of Congress and three-quarters of the states to approve it because it’s a Constitutional Amendment,” Haynes said. “That’s just not going to happen.”

The Electoral College Is an Undemocratic Mess

“A Disaster for Democracy”

Ask Democratic presidential candidate Sen. Elizabeth Warren (MA), and she will tell you that the Electoral College is inherently undemocratic. That’s why she wants to be the last president to be elected under this system.

“I want the second term to be that I got elected by direct vote. I’m ready — popular vote,” Warren said in a recent video. “I just think this is how a democracy should work. Call me old-fashioned, but I think the person that gets the most votes should win.”

Nevertheless, a slew of conservative online media outlets criticized Warren’s position as “[wanting] to get rid of our constitutional system entirely.” Another outlet blasted her position, claiming that “among her top priorities is a rewrite of the Constitution.”

When it comes to the way Americans vote, a lot has changed from the system the Founding Fathers drew up — most notably that African Americans and women are now also able to cast a vote. Granted, it took a civil war and 150 years to get to that point.

Warren’s take on this is that presidential candidates “should have to ask every American in every part of the country for their vote, not just a few random states that happen to be close.

She’s not alone either — her fellow Democratic competitors like Pete Buttigieg and Sen. Cory Booker (NJ) also want the next president to be decided by the will of the voters instead of the Electoral College.

“I tell my Democrat friends, you don’t want Congress writing election laws with Republicans in charge because they’re going to want to have three pieces of ID and a concealed carry permit before you’re allowed to vote,” Haynes explained. “And I tell my Republican friends that they don’t want Democrats to run election laws when they’re in charge of Congress because then they’ll pass a law that says as long as someone can read your name on a gravestone, you can vote.”

In a 2012 tweet, then-citizen Trump dismissed the very institution that later propelled him to the White House: “The Electoral College is a disaster for a democracy.”

In the run up to the 2016 election, Trump also said in a 60 Minutes interview that he’d rather compete for the popular vote: “I would rather see it where you went with simple votes. You know, you get 100 million votes and somebody else gets 90 million votes and you win. There’s a reason for doing this because it brings all the states into play.”

Then, just days after his victory, Trump reversed himself on Twitter: “The Electoral College is actually genius in that it brings all states, including the smaller ones, into play. Campaigning is much different!”