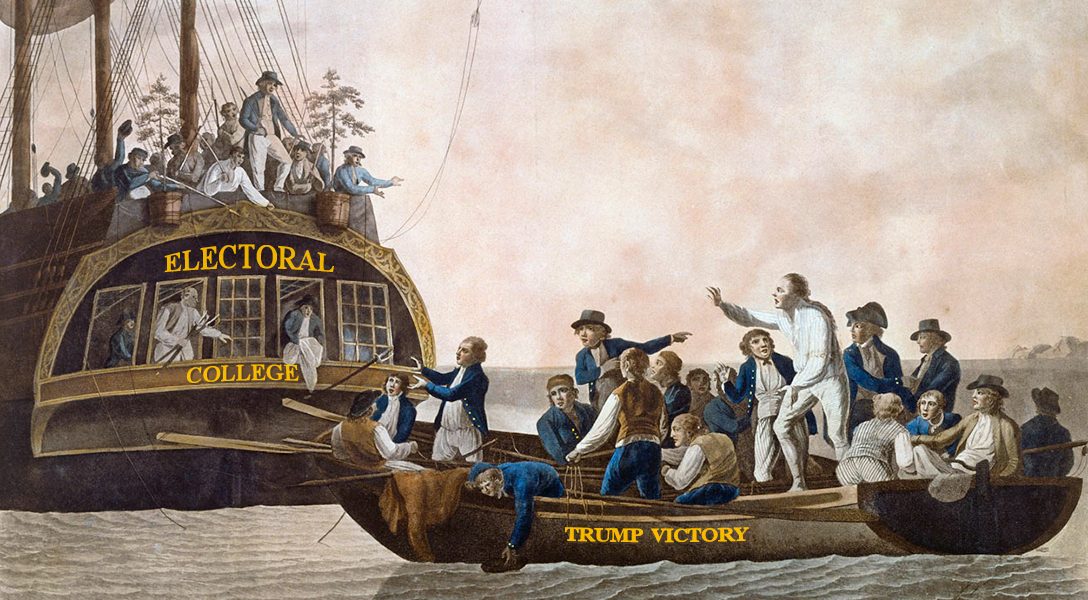 Is There Anything to an Electoral College Mutiny?

Democrats and Republicans desperate to stop Donald Trump have embraced various strategies to somehow snag the presidency away from the GOP nominee but all of them have proven to be pipe dreams. The latest — and last — of these longshot schemes is an improbable Electoral College upset.

Until Tuesday there appeared to be virtually no chance that the “Never Trump” movement would succeed in convincing Republican electors to desert the president-elect. Only one GOP elector, Chris Suprun of Texas, had publicly declared that he would oppose Trump.

That changed a little, however, when Harvard University constitutional law professor Larry Lessig tweeted: “We believe there are now at least 20 GOP electors considering a vote of conscience.”

We believe there are now at least 20 GOP electors considering a vote of conscience. Last week, there was 1. https://t.co/fdiwkbef04

Trump needs 270 votes to be elected when the Electoral College convenes on December 19. On Election Day, Trump won 306 electors. If Lessig’s count is correct and 20 of them are ready to abandon their party’s nominee, then that would mean that more than half of the electors needed to flip the election have been found. It must be stressed, however, that Lessig provided no evidence to back up his numbers.

Furthermore, just because an elector does not vote for Trump does not mean he or she would vote for Hillary Clinton. That is why the initial plan was that all of Clinton’s 232 electors would vote for Ohio’s Republican Gov. John Kasich and that Trump defectors would do the same.

This scenario illustrates why, in addition to convincing so many electors to jump off the Trump bandwagon, the plan is such a longshot. Kasich last week urged electors not to vote for him.

There is also little evidence that all Democrats would be on board with the plan, although two of Colorado’s electors had sued to be “unbound” from voting for Clinton. A judge ruled Tuesday that they must vote for the Democratic nominee because she had won the state’s popular vote.

That brings up the next major obstacle to this Hail Mary attempt to stop Trump: Delegates in 29 states and the District of Columbia are bound in some form to vote for the person who won the popular vote in that state.

That does not preclude them from voting for somebody else — but doing so comes with a potential penalty. In Colorado, for example, “faithless” electors face a fine of $1,000 and jail time of up to one year.

That is why Lessig has set up a group called “Electors Trust” that provides “free and strictly confidential legal support to any Elector who wishes to vote their conscience.”

In a last-ditch effort to make a case against Trump, nearly a quarter of Clinton’s electors have signed on to an open letter to Director of National Intelligence Jake Clapper asking that electors be given an intelligence briefing.

“The Electors require to know from the intelligence community whether there are ongoing investigations into ties between Donald Trump, his campaign or associates, and Russian government interference in the election, the scope of those investigations, how far those investigations may have reached, and who was involved in those investigations,” the letter states. Fifty-four Democrats and Suprun, the Republican elector from Texas, have signed. “We further require a briefing on all investigative findings, as these matters directly impact the core factors in our deliberations of whether Mr. Trump is fit to serve as President of the United States.”

However, even if Trump does not get the required number of votes next week, it would likely only delay things unless all Democrats and faithless GOP electors can agree on another candidate.

If no candidate garners the required 270 votes, the president would be selected by the House of Representatives in a vote in which the delegation from each state gets one vote. With Republicans controlling a majority of state delegations, it seems likely that Trump would ultimately prevail.

Lessig’s (unsupported) claim that a sizeable number of GOP electors are willing to dump Trump adds  intrigue to the Electoral College vote Monday, but chances are this will be the final pipe dream of this election.