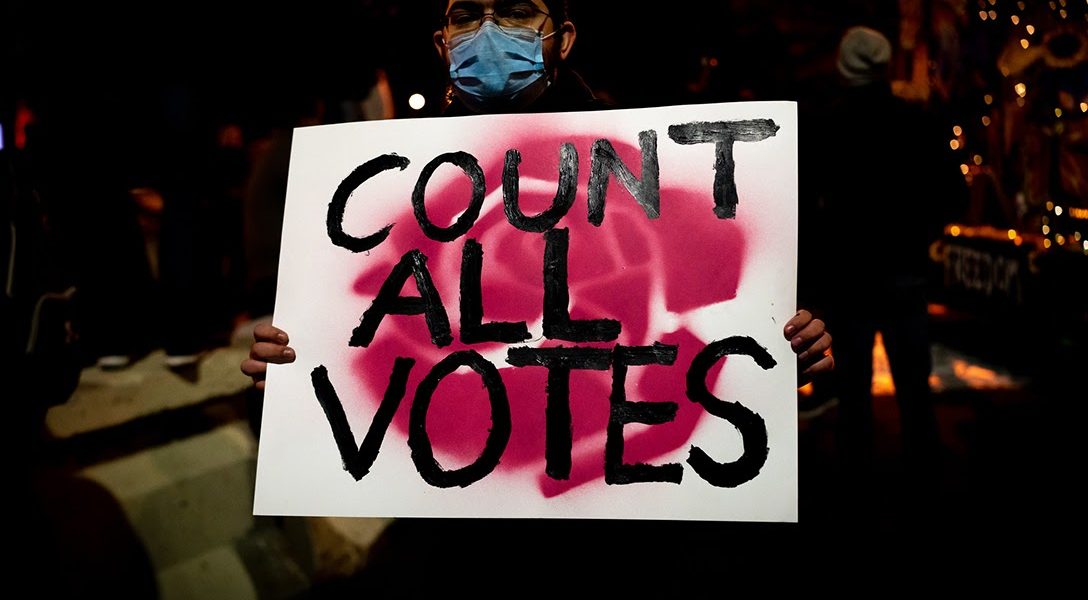 America Decides 2020: What Happens Next, Explained

In America Decides 2020, editors and reporters for WhoWhatWhy explore the critical issues concerning who can vote, how ballots will be cast, and how they will be counted — questions that could shape US democracy for years to come.

As the final votes are counted in key swing states, former Vice President Joe Biden has managed to stay ahead of President Donald Trump with 253 Electoral College votes. With final  results unlikely to be known before next week, election officials are working around the clock to count the remaining ballots, despite threats of legal action and growing protests in hotly contested counties.

Here is what to expect in the coming weeks.

Why Is There Not a Winner Yet?

The main factor delaying results: many states did not allow a record number of mail-in ballots to be processed until the start of business on Election Day. Election officials spent the past several months gearing up for the vote, but many jurisdictions lacked the infrastructure and manpower to process the ballots quickly.

The 2020 election is not the first to experience delayed results. In 2016, Green Party candidate Jill Stein requested a recount in Wisconsin and the final results were reported less than a week before the Electoral College was set to meet. When Will the Counting End?

Despite the Trump campaign’s best efforts to stop the process, tens of thousands of ballots will be counted over the next several days.

Trump falsely declared victory late Tuesday night, and his campaign has filed several lawsuits to prevent counting remaining ballots. Biden beefed up his legal team to react to recount requests by the Trump campaign in Wisconsin, Michigan, and Georgia.

Officials in Arizona, Georgia, Nevada, and Pennsylvania were still tallying the results as of Thursday morning. In Alaska, mail ballots will continue to be accepted until November 13. In North Carolina, the deadline for accepting absentee ballots that are received after Election Day is November 12.

When Does the Electoral College Meet?

Every state is required to certify its election results by December 8, the safe harbor deadline  this year. After that, the Electoral College’s electors will meet on December 14 to cast their votes. Once that is accomplished, the next Congress will certify the electors’ votes in January.

What Happens if No Candidate Reaches 270 Votes?

While neither campaign wants this to happen, both are forced to consider it. If no candidate meets the Electoral College threshold to win, there are two possible ways to proceed.

The first is the recount process. Candidates can request a recount in any state so long as the vote difference is within the margin set by a particular state. The second option is to conduct a contingent election. In this case, the state delegations in the House of Representatives vote to choose the president, while the Senate votes for the vice president.

The 2020 election is almost over. Counting and certifying results may take several more days. Patience, America.

For more of WhoWhatWhy’s work on Protecting Our Vote, see our Student Voter Guide. You can also find out the darker secrets behind our voting systems in our recently published e-book Is This Any Way to Vote?: Vulnerable Voting Machines and the Mysterious Industry Behind Them by Celeste Katz Marston and Gabriella Novello, available on Amazon now.