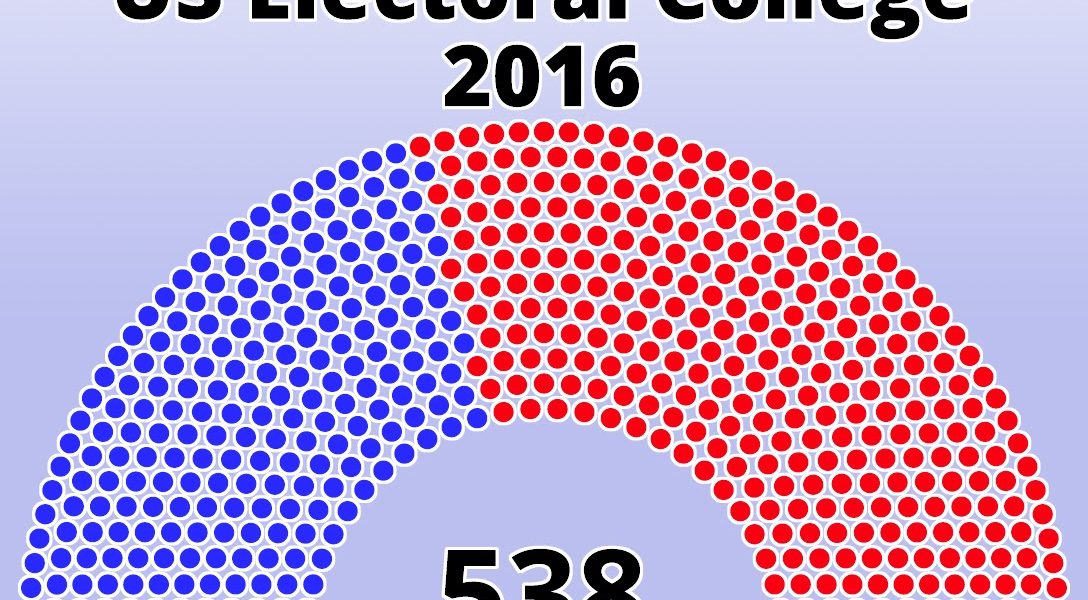 The system, known as the Electoral College, was established by the 1787 Constitutional Convention as a compromise. While one group at the Convention was in favor of selecting the president by a direct popular vote, an opposing group wanted the president to be appointed by Congress. The argument in favor of the Electoral College was that it diminished the ability of the largest states to impose their will on the smaller states.

The debate is still going on. A recent poll found that 51 percent of Americans favor abolishing the Electoral College and choosing the president by a national popular vote. Democratic voters are far more likely to support this approach, while Republicans see an advantage in keeping things the way they are. So, the Electoral College is likely here to stay — at least for now.

Here’s what you need to know about the Electoral College, and why replacing it may be harder than it sounds.

What Is the Electoral College?

The Electoral College is only used in deciding the winner of a presidential election. A total of 538 electors are appointed by their states, and the winner is the candidate who manages to get at least 270 votes.

The number of electors in each state is determined by adding the number of congressional districts and senators in the state. Let’s use California as an example. California has 53 congressional districts and two senators, so the state has 55 electors who are assigned to vote in the Electoral College for whichever candidate the winning party chooses. In contrast, Montana has one representative in the House, so that state gets three electoral votes.

When voters select their preferred candidate for president, they do so as they would during any other election. Then, the electors appointed by the winning party honor the outcome by casting their votes for the candidate who won a majority of the vote.

Electors are required to meet and cast their votes on the first Monday after the second Wednesday in December. This year, that date is December 14. The votes will then go to Congress for certification, and the president-elect will become president on January 20, 2021.

Why Does It Exist?

In 1787, the architects of the Constitution debated what would be the fairest way to elect a president. Some argued that the legislative branch was best qualified to make the choice, while others worried that this could lead to corrupt elections. The second group felt that voters should elect the president and vice president by a direct vote.

There was also a debate over how many Electoral College votes a state should receive since congressional districts are determined by population. Lawmakers in southern states opposed a direct popular vote because their states were inherently at a disadvantage — the population was roughly equal in northern and southern states, but a majority of those living in southern states were slaves and therefore had no right to vote.

This conflict led to the three-fifths compromise, which gave southern states more of a political standing within an Electoral College system. This compromise, which counted enslaved people as three-fifths of a person, provided southern states with a greater number of Electoral College votes to balance those in the North. As James Madison wrote during the Constitutional Convention:

The right of suffrage was much more diffusive in the Northern than the Southern States; and the latter could have no influence in the election on the score of the Negroes. The substitution of electors obviated this difficulty and seemed on the whole to be liable to fewest objections.

What Happens If an Election Results in a Tie?

The authors of the US Constitution were not always clear-eyed on what to do in the event that there was a tie. It took a contentious matchup in 1800 for the process to be clarified.

During the 1800 presidential election, Federalist incumbent John Adams ran against Republican Thomas Jefferson. The results were peculiar: Jefferson received 73 Electoral College votes while Adams received 65. But another candidate, Jefferson’s running mate Aaron Burr, also received 73 votes. At this point in time, electors were not required to designate which votes were for president or vice president.

With no clear victor, the House of Representatives was tasked with correcting the nation’s conundrum. As required by the Constitution, the House voted by delegation, and Jefferson became the next president.

Congress saw the 1800 election as a learning opportunity. Lawmakers reformed the Electoral College with the passage of the 12th Amendment in 1803, and it was ratified the following year. This required future electors to clearly identify the candidates they select as president or vice president. Had this amendment already been in place, Jefferson and Burr would have won the election without the need for Congress to intervene.

The process for breaking a tie is done in two parts. The House of Representatives will vote by state delegation for president, while the Senate votes for the vice president. This is known as a contingent election.

What Is a Faithless Elector?

Most states have laws that require electors to honor their state’s popular vote and cast their votes for whoever won. In fact, electors in 26 states and the District of Columbia can be punished with a fine or be replaced as electors if they break their oath. This is in large part because, in the past, some electors have gone rogue to vote for the candidate that they prefer instead.

Faithless electors were not common before the last presidential election. From 1796 to 2004, electors only went against their state’s popular vote during 12 elections. The recent debate surrounding electors reached a fever pitch when seven electors voted for a different candidate than the one their state’s voters selected during the 2016 election.

The Supreme Court, worried that continued uncertainty about whether electors had the authority to do this could lead to chaos during the 2020 presidential election, took up the issue earlier this year. The Court ruled in Chiafalo v. Washington that a state “may enforce an elector’s pledge to support his party’s nominee — and the state voters’ choice — for president.”

What About Alternatives to the Electoral College?

There is no shortage of opinions on why the Electoral College should be replaced. This comes as little surprise, since five presidents over the past 20 years have taken office despite losing the popular vote.

Critics of the Electoral College have largely rallied around what is known as the National Popular Vote Interstate Compact. In essence, the compact calls for all states to allocate their Electoral College votes to whoever wins the national popular vote. The compact would go into effect once enough states with a majority of Electoral College votes agree. To date, the National Popular Vote Interstate Compact has been enacted by 12 states that hold 196 electoral votes. Colorado, which has nine electoral votes, will decide on whether to join the compact through a ballot measure this November.

The official date of the 2020 election is 40 days away, but voters are already deciding who they want to be the next president of the United States. Many voters may choose to submit an absentee ballot in lieu of voting in person due to fears about the coronavirus, so the immediate Electoral College projections will likely reflect only the results of in-person Election Day voting. Most states do not allow election officials to count absentee ballots until the polls close on Election Day, making it all but certain that the apparent winner of the Electoral College on November 3 will have to wait before declaring victory.