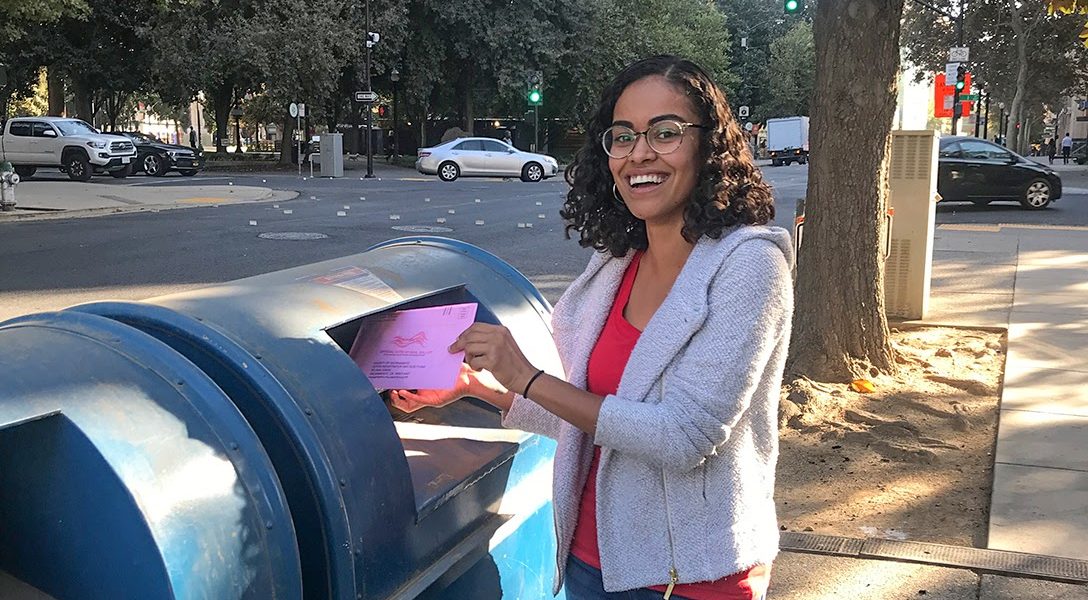 Voting by mail is not a new phenomenon, but some states are now loosening the restrictions on who can send an absentee ballot. Photo credit: League of Women Voters of California LWVC / Flickr (CC BY 2.0)
Elections

A slew of voting-rights groups denounced the president last week for spreading false claims about voter fraud, and accused his administration of attempting to subvert the 2020 election by spreading conspiracy theories about absentee voting. Trump and his allies say that fraud will be rampant and inevitable with mail-in ballots. Contrary to such claims, there is no evidence that widespread voter fraud exists either in person or by mail, although a growing number of election officials are raising serious concerns about the lack of resources — both money and manpower — to address the likely surge in absentee ballots.

If states are to effectively and transparently accommodate increased access to absentee and early-voting options, they will need federal funds. House Democrats approved $3.6 billion in its massive $3 trillion stimulus package after a previous relief bill included $400 million for more election support. But as recently as Friday morning, Trump continued his unsubstantiated tirade against absentee voting:

MAIL-IN VOTING WILL LEAD TO MASSIVE FRAUD AND ABUSE. IT WILL ALSO LEAD TO THE END OF OUR GREAT REPUBLICAN PARTY. WE CAN NEVER LET THIS TRAGEDY BEFALL OUR NATION. BIG MAIL-IN VICTORY IN TEXAS COURT TODAY. CONGRATS!!!

A coalition of progressive groups is calling on the Senate to disavow Trump’s comments and immediately approve the funding allocation that House Democrats included in the HEROES Act relief bill. Sean Eldridge, president and founder of Stand Up America, condemned Trump’s recent Twitter tirades against absentee voting. Eldridge said during a recent call with reporters that Trump’s comments are a “despicable attack on our democracy.”

“The President of the United States is trying to suppress the vote in the middle of a pandemic,” Eldridge charged.

Critics of the Democrats’ plan counter that the funds for the election are not necessary right now. Some Republican senators, like Colorado’s Cory Gardner, accuse Democrats of playing party politics and injecting “special pet political projects” into the latest relief package, rather than addressing the immediate needs of the American people during this pandemic. Ezra Levin, co-founder and co–executive director of the progressive grassroots group Indivisible, said his group refuses to accept a rationale of wait-and-see for the funding, because he doesn’t believe the Senate will take the cause up at a later time.

“We should believe [Republicans] when they tell us that they’ll do everything they can to fight safeguards to our democracy,” Levin added. A San Mateo County, CA, official vote-by-mail ballot envelope is ready to be opened. The postal service could see extra strain this election due to a massive influx of mail-in ballots. Photo credit: Bruce Washburn / Flickr (CC BY 2.0)

Tiffany Muller, president of the political action committee End Citizens United, argued that state and local election officials need the funds now to ensure the 2020 election is conducted with as few obstacles as possible.

“American people just aren’t with the president or Republicans on this,” Muller said. “We’re going to keep the pressure up.”

While states wait for the Senate to take up the HEROES Act, voting-rights groups are expanding their digital grassroots organizing efforts in a number of states. They are advocating for, among other things, waiving excuse requirements and waiving notarized witness signatures for absentee voting.

“This isn’t rocket science,” Muller said. “We know what we need to do.”

Public polling continues to show that the majority of Americans want the option of voting absentee. The latest survey from Fox News found that nearly two-thirds of voters are in favor of voting by mail. The president and Vice President Mike Pence voted absentee during the Florida and Indiana primary elections this year.

White House Press Secretary Kayleigh McEnany — a staunch defender of the president’s attacks on absentee voting — has voted absentee 11 times in the past decade, according to the Tampa Bay Times.

Levin argued that Republicans’ comments show that they want to see a “nationwide replay of the Wisconsin election.” Levin accused Republicans of “forcing the in-person election” in that state and said the results were “what everybody expected and predicted.” Voting-rights groups saw long lines at polling places in predominantly communities of color, and health officials claimed that they could tie dozens of confirmed cases of coronavirus to the primary election.