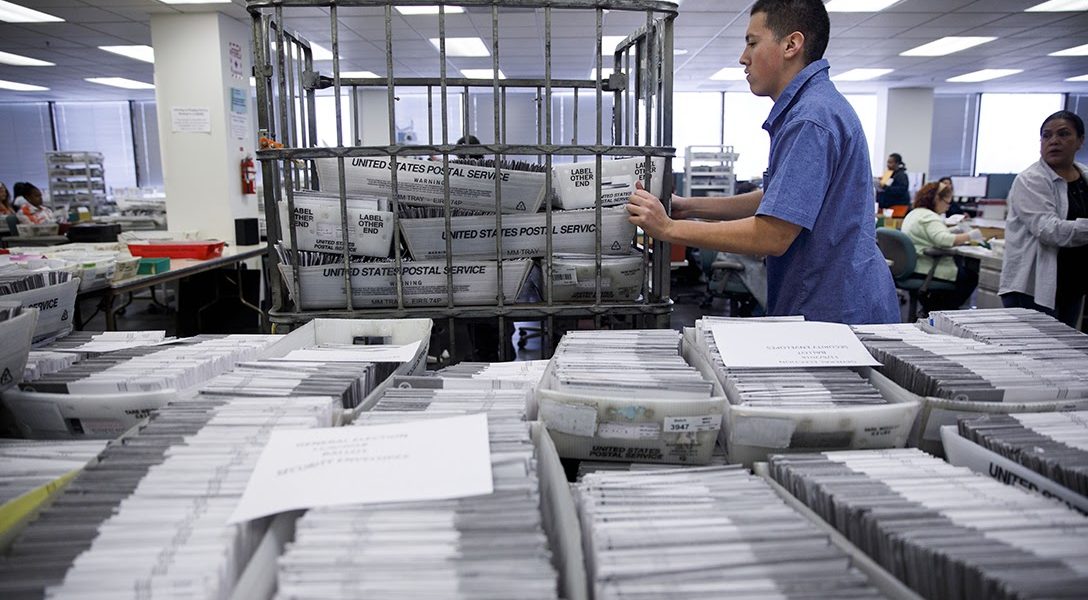 The latest victim of the attack on voting rights appears to be the United States Postal Service (USPS).

As more states make changes to their election laws due to fears about the coronavirus, it remains uncertain how prepared local officials are to offer alternative methods of voting. In California, for example, Gov. Gavin Newsom (D) announced last week that the state would move toward an all-mail election — which means tens of millions of ballots will go through the postal system.

Local election officials have raised concerns about the surge in absentee ballots and whether there is enough funding to process every returned ballot. And, in part because the White House has turned funding the postal service into a partisan debate, the cost of mailing every Californian a ballot could amount to a figure that the state has never had to meet before.

The challenges may intensify, as the USPS, the agency charged with delivering and returning millions of ballots, is facing unprecedented uncertainty after reports that President Donald Trump will veto any legislation that includes funding for the beleaguered agency. Without federal aid, states may be forced to make difficult budgetary decisions in order to pay for the surge in mail ballots — so voting-rights groups are turning to the courts for help.

“We know that a functioning USPS is critical to the state of democracy in 2020,” said Kristen Clarke, president and executive director of the Lawyers’ Committee for Civil Rights Under Law, during a call with reporters Monday. “We want to ensure that the postal service is not politicized.”

While many states are easing restrictions on voting by mail in order to have as few people as possible lining up in person on Election Day, others refuse to waive requirements that have made vote-by-mail inaccessible for decades — like a notarized signature on the envelope of a voter’s ballot or a copy of a photo ID with their ballot.

Hundreds of thousands of voters have already requested an absentee ballot this year, Clarke said. Her group recently rolled out an interactive online tool for voters to learn more about their local and state election laws and is actively involved in a number of lawsuits to ensure every eligible voter can cast a mail ballot. These efforts are especially geared toward voters in minority and rural communities, who have long dealt with barriers to mailing services.

“For civil rights lawyers, the courts are proving to be a central forum for ensuring that African Americans and people of color will enjoy equal access to the ballot box during this challenging [election] season,” Clarke said.

“We know that a functioning USPS is critical to the state of democracy in 2020. We want to ensure that the postal service is not politicized.” —Kristen Clarke, Lawyers Committee for Civil Rights Under Law

Working the Courts to Expand Voting

The Lawyers’ Committee is just one of many groups that have filed lawsuits in recent months over restrictions to mail-in voting and allegations of voter suppression. One lawsuit on the group’s radar is an attempt to remove more than one million voters from the voter rolls in Pennsylvania by the conservative self-described “election integrity” group Judicial Watch.

Judicial Watch is known for filing voter-purge lawsuits throughout the country. The group is also attempting to remove voters from the rolls in North Carolina, which some voting-rights groups have criticized as a “targeted removal” of voters amid a global health crisis intended to limit access to absentee voting. The Lawyers’ Committee’s Voting Rights Project is now involved in the case in Pennsylvania.

“We are trying to ensure that there are as many viable options for voters, consistent with protecting their health,” Ezra Rosenberg, co-director of the project, said during a call with reporters Monday. Judicial Watch filed suit at the US District Court for the Middle District of Pennsylvania in Scranton. Judicial Watch seeks to remove more than a million voters from the rolls. Photo credit: Carol M. Highsmith / Library of Congress

Another state the group is focused on is Tennessee, where voters must, among other things, provide an approved reason to access a mail ballot. Voters may vote absentee by filing a statement documenting a diagnosed illness, but officials in Tennessee have not allowed voters to cite fears about contracting the coronavirus as a reason for voting by mail. Rosenberg argued this “violates the right to vote,” and his group filed a lawsuit to force no-excuse absentee voting during the November election.

Protecting Voters’ Health — at Any Cost

Communities of color have been disproportionately impacted by the coronavirus, said Deuel Ross, senior counsel for the NAACP Legal Defense and Educational Fund. One of his concerns is whether restrictions on mail-in voting that have historically disenfranchised African American voters will be lifted.

A number of states require absentee voters to include a copy of their photo ID or a notarized witness signature on their ballot’s envelope to prove their identity. The NAACP has filed four voting-rights cases in the last month to lift these restrictions and ensure that minority voters have equal access to the ballot box, Ross said.

“No voter should have to choose between their vote and their health,” Ross added.

Meanwhile, the Lawyers’ Committee intervened in North Carolina last month to challenge the use of touchscreen voting machines known as ballot-marking devices. Election security experts have long had concerns about these machines because they have been proven to be hackable and have faulty programming, but COVID-19 sparks a set of issues the voting public has yet to experience: scientists say the coronavirus can last for days on certain voting machine surfaces.

“The machines, if not cleaned properly because of their configurations, could increase the risk of infections for voters,” Rosenberg said.

Election experts have estimated the cost of protecting the 2020 election nationwide at around $4 billion, and Congress has so far allocated $400 million for election security in its recent stimulus bills. In a recent letter to Congress, more than 50 voting-rights groups demanded the full funding needed for the November election.

“None of us know how long this pandemic will last,” the letter said. “Failing to provide states with this necessary funding puts the November election and the rights of every voter at risk.”