Congress Is Trending Right, Despite GOP Fears of a “Woke” Left

Not a day goes by without a prominent Republican warning that “radical” Democrats are seeking to transform the United States with their “woke,” “socialist,” or “communist” ideas. However, a new study on polarization in Congress shows that, while both parties are getting more extreme, it is the GOP that has shifted much more sharply to the edge than congressional Democrats have.

“If we allow the Marxists and communists and socialists to teach our children to hate America, there will be no one left to defend our flag or to protect our great country or its freedom,” former President Donald Trump said at a rally this weekend.

Inciting fear of a left-wing mob running amok is one of the most popular Republican tropes heading into November’s midterm election. But while this rhetoric may play well with the GOP’s base, it doesn’t reflect Congress’s actual ideological trajectory.

It’s no secret that polarization is getting worse — both across the country and in Congress. So it should not come as a surprise that a new report from the Pew Research Center found that Republicans and Democrats are less aligned today than at any point in the last 50 years. Counter to the GOP’s narrative, however, this has led to a Congress that is more conservative on average than it was decades ago. The data paints a picture of a legislative body that is increasingly at odds with the political leanings of the American public.

The roots of this polarization go back multiple decades, according to the study.

Since 2002, “There’s been no overlap at all between the least liberal Democrats and the least conservative Republicans in the House. In the Senate, the end of overlap came in 2004.”

To conduct the study, Pew used lawmakers’ roll call votes to track their political leanings through time, comparing data starting in 1971 through February 2022.

Pew found that though both parties have moved away from the center, the GOP has moved further to the right than Democrats have moved to the left. 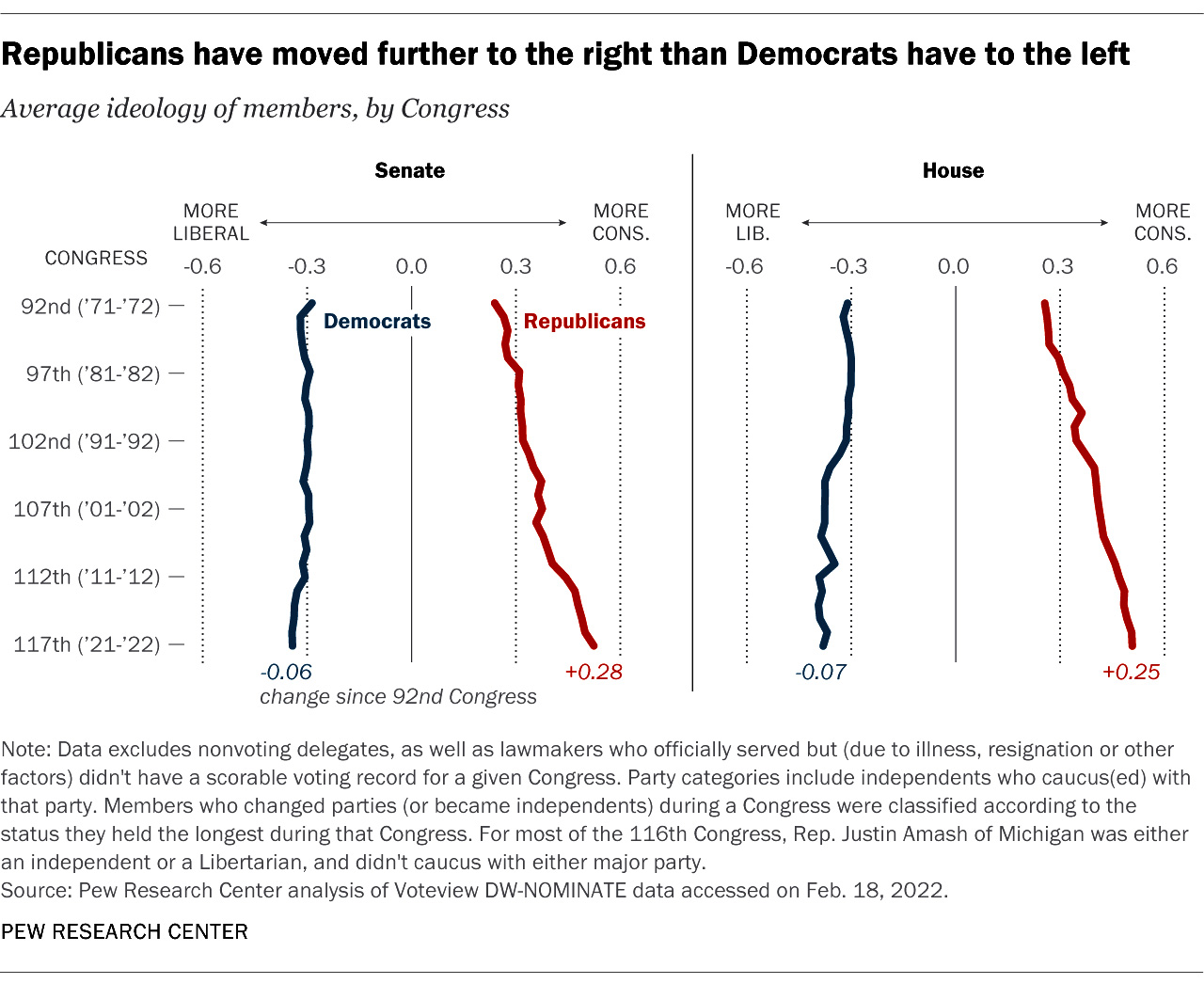 Rhetoric from the Republican Party, which aims to characterize the Democratic Party as overrun by its most left-wing flank, obscures this reality.

“The all-or-nothing 2022 midterm elections are going to determine if we SAVE our great country from socialism, or if we are going to continue on our never-ending downward spiral,” read a recent fundraising email from the National Republican Senatorial Committee.

In a fundraising email to supporters in February, Sen. Ted Cruz (R-TX) wrote, “I’m calling for all Americans to PUSH BACK on the radical left right now. … We’re dealing with something close to mass woke psychosis, and the Democrats are becoming fully unmoored from reality.”

At the most recent CPAC conference last month, the theme of which was “Awake, Not Woke,” Florida Republican Governor Ron DeSantis proclaimed that “woke is the new religion of the left.”

Republicans have doubled down on messaging framing the Democratic party as “woke” — a term originally used to describe someone with an understanding of systemic racism but now used pejoratively by the right — and socialist, even as conservative Democrats in Congress have greatly influenced Congress’s legislative agenda for the past two years.

In 2021 and early 2022, conservative Democrats, including Sens. Kyrsten Sinema (D-AZ) and Joe Manchin (D-WV), tanked two of President Joe Biden’s initiatives, a sweeping social spending and climate bill and legislation to protect voting rights, both issues championed by progressives in the party. 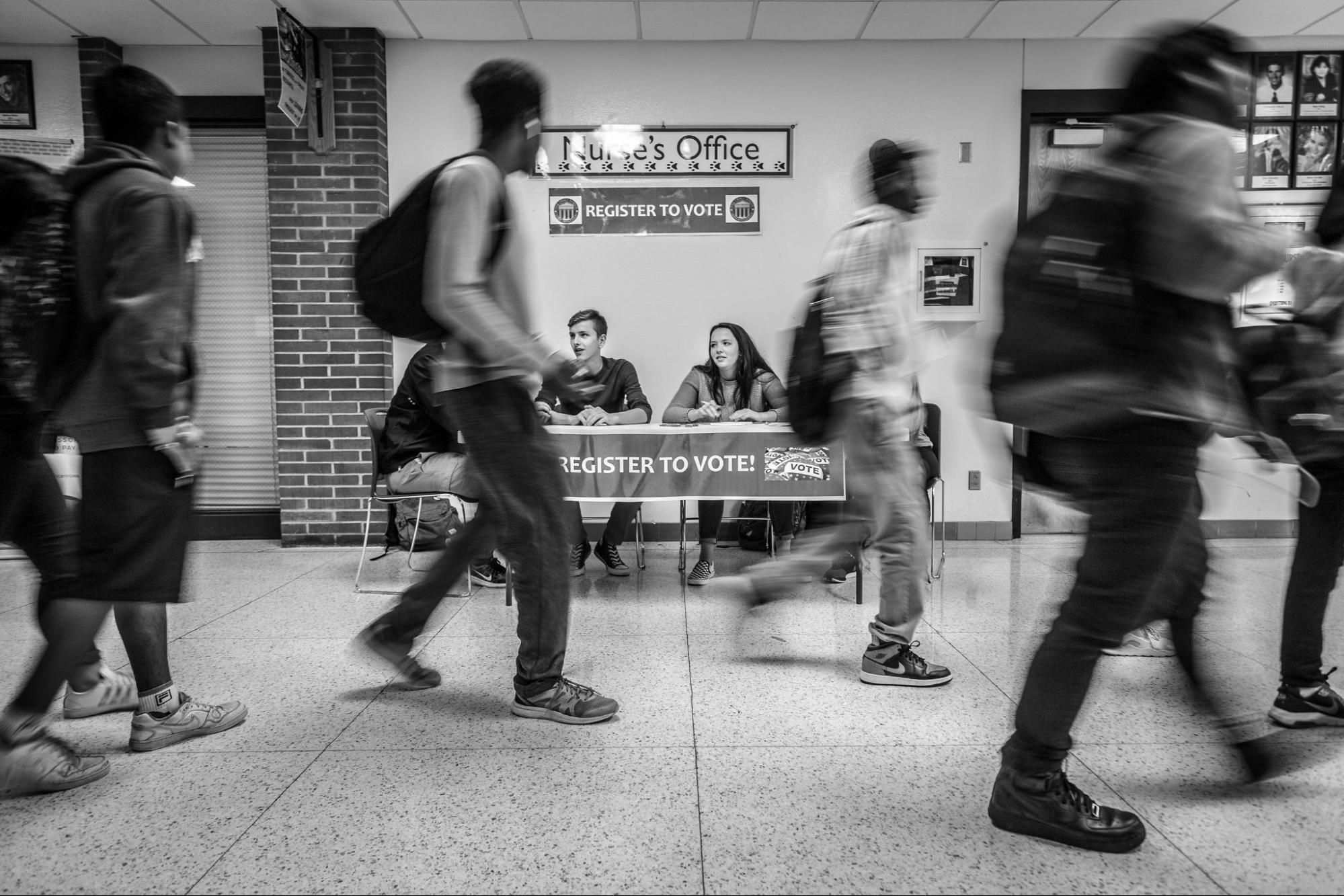 Congress’s movement to the right also contrasts with the ideological leanings of the American public, which have tracked left for the past few decades, according to a survey from 2021, which was conducted between 1972 and 2018.

The study analyzed 283 attitudes and opinions — which included a broad range off issues, such as military spending, interracial marriage, and legalizing marijuana — and found that for 62 percent of the attitudes analyzed, younger people held more liberal views than older people on average, compared to 5 percent that tracked more conservative.

The public is also trending more liberal across all age groups, the study found. Half of the attitudes studied moved in a more liberal direction, while 11 percent became more conservative.

“Such consistently liberal results are surprising given conservatives’ many wins in elections, legislation, and policy during this time,” concludes the study, alluding to deeper issues with American democracy.

“The contradiction hints that American politics may not respond to public opinion efficiently.”