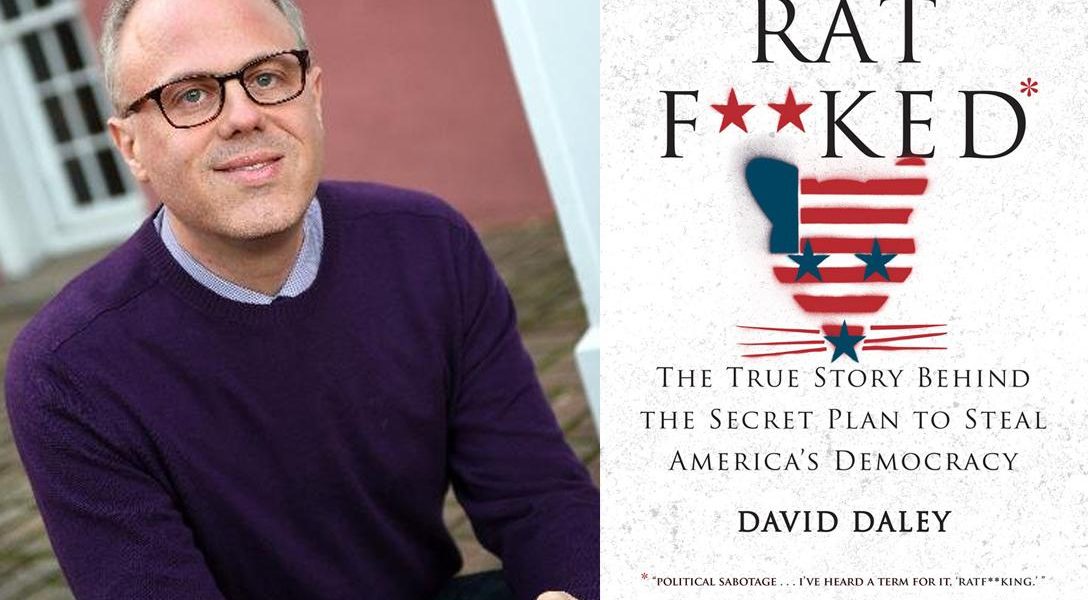 Like prestidigitation, while we’re all watching the media circus that is our presidential election, the House of Representatives is being usurped using the most sophisticated mapping and digital software. It’s a process the Republicans started back in 2010 with only 30 million dollars. The net result has been to lock up congressional control for at least a decade. The Democrats are now trying, perhaps too little too late, to compete. If they can’t, control may be locked up until at least 2031.  The goal set by the GOP was a landside-proof House and we may soon see if they succeeded.

In this week’s WhoWhatWhy Podcast, David Daley, the digital media fellow for the Wilson Center for the Humanities and the Arts at the Grady School of Journalism at the University of Georgia, and the author of Ratf**ked: The True Story Behind the Secret Plan to Steal America’s Democracy, talks to Jeff Schectman about this powerful new tool that has dramatically undercut the electoral process — the very foundation of democracy itself.

We all know that magic is about misdirection. Look here while I do something else over there that you’re not looking at. In some ways, politics is the same way. While we’re all busy watching the media circus that is our presidential elections, political operatives, particularly Republicans have been working hard for many years to gain control of statehouses, and in turn have the legislature draw the Congressional District boundaries, enhancing and securing their control of the House. The way they’ve done this, the money they’ve spent doing it, and the insidious way they’ve taken the practice of gerrymandering to new levels has resulted in both a secure Republican Congress, but also in many ways lies at the heart of the polarization that has paralyzed our politics. My guest today on Radio Whowhatwhy David Daley gives us an overview on what’s going on.

David Daley is the digital media fellow for the Wilson Center for Humanities and the Arts. He’s also the author of the new book Ratf**ked: The True Story Behind the Secret Plan to Steal America’s Democracy. David Daley, thanks so much for joining us here on Radio Whowhatwhy.

David Daley: A real pleasure, Jeff. Thanks for having me.

Jeff Schechtman: It’s great to have you here. First of all, explain what it is that Republicans set out to do, when they decided to do it, and what they were trying to accomplish.

David Daley: Absolutely. I think Democrats celebrated in 2008, after Barack Obama wins the presidency and it takes a super majority in the Senate. Republican operatives however realized that the more important election was coming up the following year in 2010. And they set their sights on a really aggressive and audacious plan centered around the next census and redistricting. We redraw every district in the country every ten years after the census, so elections in years that end in zero have a little more power and can reverberate throughout the next decade. Republicans raised 30 million bucks, which is all it took, and they spent that money targeting control of state legislative chambers across the country, and very carefully strategized to be sure that they would control every seat at the table when it came to redistricting the following year. So in blue states and purple states like Ohio, Michigan, Pennsylvania, North Carolina, Wisconsin, they take control of the entire state legislative process. They draw in amazingly tilted maps favoring their side, and in 2012, when the first elections are held on these maps, it’s another Democratic year, but the Republicans have built themselves a firewall in the House so stout that 1.4 million more voters go for Democratic House candidates than Republicans, and yet the House stays under Republican control. It’s the first time in 40 years, only the second time in about 100 that the party with the most votes does not win the most number of seats; it’s a real crisis of democracy.

Jeff Schechtman: In doing that though, weren’t they doing something that harkens back even to the founders, even to Hamilton and Madison and to Patrick Henry in terms of drawing congressional districts to serve the purposes of one particular party or another?

David Daley: You’re absolutely right. I mean gerrymandering in some ways is the oldest political trick in the book. It goes back to Patrick Henry in 1788, to Elbridge Gerry who takes the historical shame of having a name for him in 1790. But from 1788 through save in 2000, that is the horse and buggy era of gerrymandering. That is the pen and parchment paper and maybe primitive computers, but in 2010, the technology has changed to such an extent that you can draw lines that you know exactly how they will respond. They use a program called Maptitude, which comes preloaded with all the census information, so it’s amazing demographic detail on ethnicity and economics and religion, everything you might imagine. And then you can add all the public record datasets into this; so voter registration numbers, voter turnout numbers, election results, precinct by precinct, census block by census block, when you see these maps and they look really strange and they turn in odd ways, all of those lines have a reason because they know who lives there, they know who these people are and they know how to draw maps now that can remain in a district and keep a party in control for the entire decade.

Jeff Schechtman: Of course one of the things you point out is to a certain extent, this has backfired even on some Republicans because the districts have become too pure and in many cases, too extreme as Eric Cantor might attest to.

David Daley: Well, John Boehner would probably tell you the same thing, even someone as conservative as Renee Ellmers lost her seat in North Carolina. She was a real Tea Party favorite not that long ago, now she’s not even pure enough. But I think what has happened is we’ve created so many uncompetitive seats; about 400 or 435 seats are non-competitive, and when that happens, the only election that matters is the party primary, and that is a race for purity between “I’m crazy” and “Oh no, no, no, no. Let me tell you how much crazier I am than you!” And the Republicans as a result, have pushed out any of the moderate voices, there aren’t many of them left, and it makes our politics extreme. It sends a different kind of legislator to Washington. One who’s not interested in compromise. One who in fact knows that compromise is the one thing that might actually earn a primary challenge, and it empowers the angriest piece of the base, and it creates the conditions, not only under which we don’t have to actually talk and persuade each other about the correctness of our cause anymore because you don’t need the other side to win in these districts, but it creates the conditions under which a strongman type like Donald Trump can step in and take control of the party.

Jeff Schechtman: What do we learn from looking at the antithesis of this? When we look at California today which, one: has open primaries, two: is looking at ways to draw district lines outside of the party structure, really is rebelling in many ways to these ideas that we’re talking about, what do we learn in your view from that experience?

David Daley: Well, I think that the California experience has made elections here more competitive. You have certainly seen more turnover in your congressional delegation as a result of this. I mean I believe the numbers are between 2002 and 2010. There was exactly one incumbent who lost, something like 500 House races over that time. When you draw new lines, you immediately see 14, 15 incumbents departing or losing. So it matters. Commissions have mixed results across the country, in part because it’s hard to take all of the politics out of something that’s inherently political as drawing lines. I mean even in California, you see how there’s secret efforts behind the scenes by party leaders, here on the Democratic side too; trying to influence the members of the commission. If you look at Arizona, it’s the same thing. In Florida, where voters insist on a constitutional amendment in 2010 on nonpartisan redistricting. Republicans actually go to the effort of setting up a shadow sham redistricting process and have some of their smartest consultants designing maps any way and feeding them into the system under phony email addresses set up under the names of former interns. It goes to show how important these lines are and all of us think of gerrymandering as politics as usual, or we think of it as something that made our eyes glaze over in eighth grade civics class, but the politicians spend this much time on it because they know it is the essence of control and if we as citizens don’t step back in and take back the basic building blocks of our democracy here, it’s going to be a dangerous problem for a long time.

Jeff Schechtman: And finally, talk about what Democrats are doing about this with an eye towards the next census in 2020.

David Daley: Sure. The Democrats really got their clocks cleaned in 2010. They were not ready for this play. It was different than any one that had been run before, they didn’t have the vision to come up with it themselves. It was really a catastrophic strategic failure and it’s locked in the public control of the House for the rest of the decade and also state legislatures around the country, which in some ways is just as important. The Democrats are trying to run a play called Advantage 2020, and they’re trying to get ready to do the same thing that the Republicans did with the red map plan in 2010 as far as trying to win in state legislative races. The problem is they’re already underfunded compared to what the Republicans are doing. They’re not going to have the same element of surprise, and they still have to win on these tilted maps. Until the Democrats can figure out how to win on these maps that have been designed to withstand a landslide, they’re going to lose and if they can’t figure this out before 2020, you’ll have another redistricting in 2021. The technology has only gotten better, and the Republicans could lock in control of the House for another decade then, and then you’re talking about the 2030 one.

Jeff Schechtman: Has there been a lesson though in something that we were talking about before in terms of the purity that is required; what’s happened to Cantor and Boehner, what’s happened with Trump and the impact that it’s had on the traditional Republican establishment?

Jeff Schechtman: David Daley, the book is Ratf**ked: The True Story Behind the Secret Plan to Steal America’s Democracy. David, I thank you so much for spending time with us here on Radio Whowhatwhy.

David Daley: I really appreciate it, thanks again.

If you liked this podcast, please feel free to share it and help others find it by rating and reviewing it on iTunes. You can also support this podcast and all the work we do by going to whowhatwhy.org/donate.