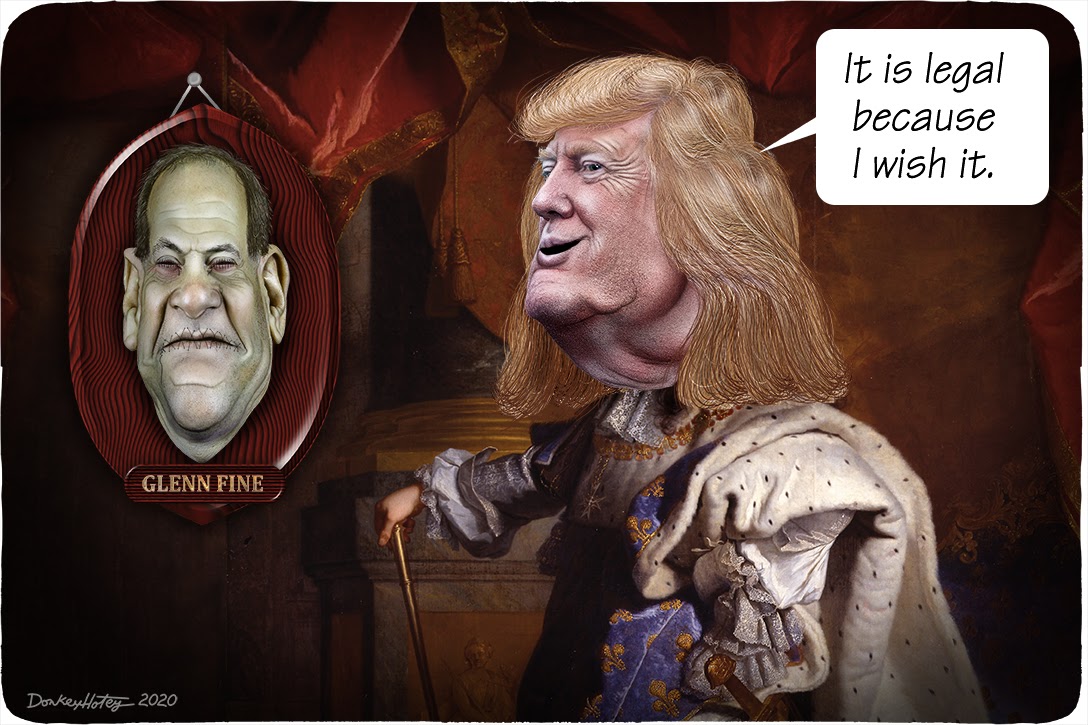 Why Trump’s Contempt for Oversight May Sink Pandemic Stimulus

President Donald Trump lacks the social graces and the administrative competence of the French monarch Louis XIV. But he does share one sentiment with him. “L’etat c’est moi,” Louis is believed to have proclaimed. “The state, it is I.”

The king presumably saw no separation between himself and France. Trump also doesn’t seem to accept the fact that the federal government has a mission beyond serving his own needs and ego. He mistakes the Justice Department for his team of personal lawyers. He considers the Supreme Court a body to ratify his decisions. The federal stockpile of personal protective equipment is his own stash to share or withhold. And the US treasury? It’s his own personal checkbook.

This is an alarming sentiment, particularly now, as a coronavirus takes tens of thousands of lives, and robs millions of Americans — more than 16 million to date — of their livelihoods. Congress has passed the first in what is expected to be a series of stimulus laws to pump trillions of dollars into the struggling US economy. But if the money is not spent prudently, it will not get to the people who really need it. Americans need this money to be doled out responsibly and honestly.

So it is disheartening, though unsurprising, that the president found a way to “fire” the person who was supposed to keep stimulus lending transparent and accountable.

Last Monday, Trump dismissed the man who had just been chosen by his peers in government to head the Pandemic Response Accountability Committee (PRAC). Congress created PRAC to ensure that the $2.2 trillion pandemic stimulus law would be spent wisely and with transparency.

But Trump effectively yanked that position away. Everyone on the stimulus accountability committee needs to be an inspector general for an agency. Trump demoted Fine to deputy IG, making him ineligible to chair or even serve on it.

Trump hates restraint or oversight of any kind. And when Congress tries to impose it, he chafes. Inspectors general really get to Trump, because they are like Scrooge’s ghosts: they point to wrongdoing on his part and the part of his administration.

Congress passed laws creating inspectors general in many major federal agencies. They serve as nonpartisan independent agency watchdogs, whose mission is to “prevent and detect waste, fraud and abuse in government.”

No president likes it when an IG finds fault with an executive branch agency. But in the past, presidents have understood and respected what IGs do. This president thinks it is absolutely okay to insult them, and worse.

As Danielle Brian, executive director of the Project on Government Oversight, so aptly put it: “We wanted inspectors general because of an out-of-control president named Richard Nixon, and this president is trying to destroy them.”

The IG at the Department of Health and Human Services recently earned his ire when she issued the results of a survey of hospitals and found that they were facing shortages of personal protective equipment and hospital beds, and that more patients needed to be tested. Trump called her report “just wrong,” and later sent a tweet asking why the IG hadn’t criticized the Obama administration during the swine flu epidemic.

On April 3, Trump threw out Michael Atkinson as inspector general of the intelligence community. You might recall that Atkinson had the temerity to follow the law and forward a CIA whistleblower’s complaint about Trump’s call to Ukraine president Volodymyr Zelensky to Congress. That call triggered an impeachment proceeding. Trump said he was dumping Atkinson because he had lost faith in him.

That flimsy excuse was too much even for some Republican senators, who warned Trump that a 2008 law barred his firing the IG for “political reasons.” But in the avalanche of news about the pandemic, who really was paying attention?

But it’s one thing to punish someone who did the right thing. It’s even worse when you pre-empt a dedicated federal official from doing a service to his country. It’s also dangerous when — in the middle of an unprecedented national crisis — the president uses IGs like chess pieces to rebuff any perceived threats to his authority.

Nobody knows what Fine did to irritate the president. Some surmise that the move was mostly about Trump insisting, once again, that he was in charge of spending $2 trillion and that Congress shouldn’t butt in.

After all, when he signed the bipartisan stimulus bill into law on March 27, Trump issued a signing statement that essentially told Congress that he would not tolerate congressional oversight.

Of course, that is what House Democrats demanded when they agreed to pass the stimulus bill. Lawmakers of both parties have stated that they want companies who receive these loans to retain their employees. They don’t want the funds to increase executive salaries or to be used to buy back stock. Democratic lawmakers also want employers to retain workers’ health, pension, and retirement benefits.

Democrats were especially wary about handing over $500 billion — nearly one-quarter of the entire $2.2 trillion stimulus aid — to the Treasury Department, which would use the fund to approve up to $4 trillion in emergency loans to corporations. Democratic presidential candidate Joe Biden called it a potential “slush fund” for special interests. House and Senate Democrats pushed for accountability bigger than Treasury Secretary Steve Mnuchin’s pinky swear. That’s one of the reasons they insisted on congressional oversight through PRAC and a special inspector general at the Treasury Department.

So what are Trump’s priorities? He seems mostly intent on saving airlines, hotels, and fossil fuel industries. Democrats insisted on a provision that bars Trump and members of his family from directly benefiting from grants and loans. However, even that language, experts speculate, would not prevent Jared Kushner, Trump’s son-in-law, from securing this aid. And Trump and his relatives likely will benefit from another provision, offering tax relief to wealthy real estate investors.

And even with more oversight, billions already are earmarked for special interests in the stimulus law: $15 billion for a tax break for retailers, and $17 billion for companies vital to national security, which must make defense contractors like Boeing heave a sigh of relief.

And that’s the problem. To average Americans, desperately hoping that the COVID-19 pandemic doesn’t kill them, the headlines about IGs being attacked and fired seems like a lot of inside baseball. But their role, and the role of Congress in overseeing how federal funds are spent, is crucial to our democracy.

Will Trump be able to find other ways to waste many more billions to help out his golfing buddies, donors and relatives? A lot will depend on whether Republican lawmakers really want to be responsible for unaccountable government on such a massive, unprecedented scale.

One thing is for certain: The notion that “we’re all in this together” during this pandemic rings hollow when we have a president who does not understand what that phrase even means.