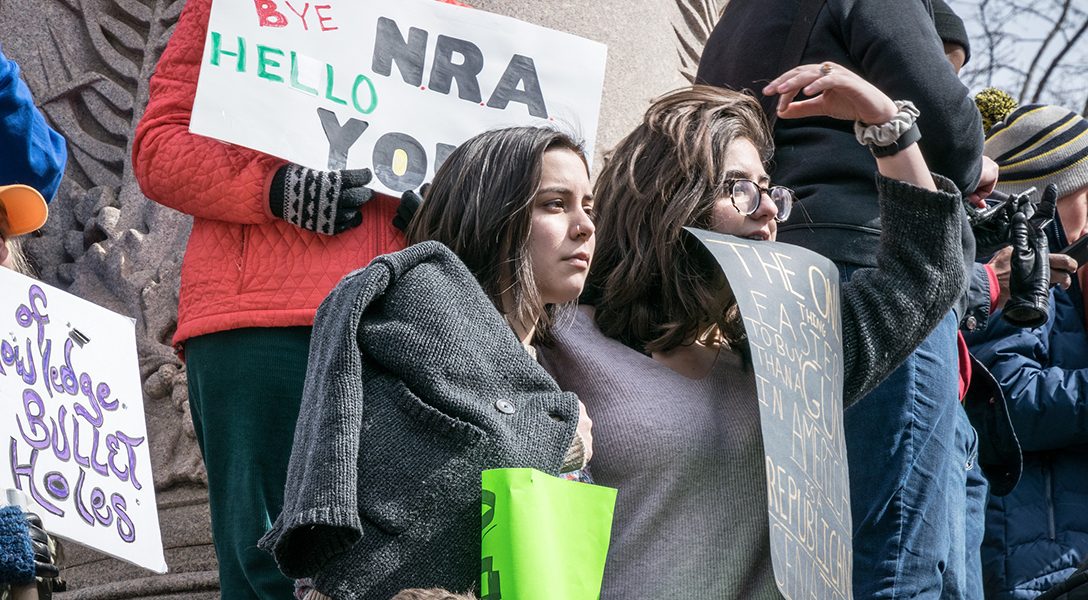 We all know the story. On Valentine’s Day, an expelled 19-year-old returned to his old school, Marjory Stoneman Douglas High School in Parkland, FL, and, armed with an AR-15 assault rifle, killed three teachers and 14 students.

Many Stoneman students found politicians’ offers of “thoughts and prayers” wholly inadequate, and vowed to lobby and organize to get meaningful gun control laws passed at both the state and federal levels.

Their efforts sparked student walkouts throughout the country, and mobilized hundreds of thousands of students last Saturday in more than 800 marches in Washington, DC and throughout the US and the world.

It is difficult to know whether Saturday’s March for Our Lives will prove to be a “watershed” event in American history. But what is known, even now, is that not since perhaps the Vietnam War has one issue so galvanized a generation. Here are four takeaways:

The marchers repeatedly made the point that donations from the National Rifle Association (NRA) kept elected officials from supporting gun control laws. The prime target of their ire was Sen. Marco Rubio (R-FL). Rubio, the students claimed, has benefited from more than $3 million in NRA largesse since his first federal election campaign in 2010. The teens did a bit of math homework: They divided the estimated number of students enrolled in schools in Florida by the NRA’s spending supporting Rubio or trashing his opponents since 2010. That number turned out to be $1.05 per student. They asked if their lives weren’t worth more than $1.05.

Media fact-checkers faulted some of their calculations, but the NRA’s Rubio support pales compared to more than $200 million in political spending by the gun rights group since 1998. The point the students made remains compelling. As Stoneman student Sarah Chadwick pledged: “We will not allow a price to be put on our lives.”

This was a driving theme in the march, observed Heather McGhee, president of Demos: “The fact that money in politics and the way that the NRA is able to put their financial interests and their political interests ahead of the lives of children. For young people, that is a very, very stark moral issue.”

While civil rights activists and white college students both protested the Vietnam War, they often did it separately. That may have been in part because their jeopardy was not the same. While young American men of all races and classes were subject to the draft, affluent white boys had many more resources to evade it, such as getting student deferments, finding cooperative physicians to identify “health” problems (like bone spurs), or moving to Canada. In the early years of the war in particular, black men disproportionately made up the armed services, representing more than one-fifth of the troops in Vietnam, well above their share of the total US population. But there are no strategies that can exclude any student from the threat of gun violence. Black students experience that violence as a routine fact of life, an occurrence that the larger society ignores. White students know it only as a random, irrational event. But neither white nor minority students can fully escape the danger. And efforts to turn schools into fortresses only reinforce the trauma.

The Parkland students recognized that their affluence and race helped drive the media’s attention, but they wanted to make the narrative more inclusive. As Parkland student Jaclyn Corin put it: “We recognized we are privileged. … We share the stage today and forever with those who always have stared down the barrel of a gun.”

They worked hard to share their media access and influence with other teens from cities like Baltimore and Chicago and West Los Angeles, who also delivered powerful messages at the DC March. Indeed, Parkland hosted Chicago students before the march. As Parkland’s Emma Gonzalez tweeted, “‘Florida’s safest city’ and one of the cities in America most affected by gun violence came together to share stories, ideologies, and pizza.” If the Parkland students recognized their privilege, their urban peers knew the value of attention they rarely receive.

Those students used what Chicago teen Mya Middleton called this “amazing opportunity” to appeal not only for gun restrictions but also for better schools and more resources to combat poverty and joblessness. They insisted that their pain, and the names of their dead, be counted.

Among the most eloquent was Edna Chavez, of South Los Angeles, who spoke of the shooting death of her brother, Ricardo. “I lost more than my brother, I lost my hero,” she said. “I carry that trauma everywhere I go.” Chavez said that she was in Washington not only to “stand with Parkland students,” but also to “elevate my South Los Angeles community.” She urged policymakers to “fund mentorship programs, paid internships and job opportunities” and “change the conditions that foster violence and trauma.”

4) Teens used their youth to make their case

After her brief speech, Gonzalez stood silent on the stage for an additional four minutes, tears streaming down her face. It was a dramatic pause, one that made the audience restless and uncomfortable. Finally, a timer beeped. She’d made the gesture to give the public the experience of just how long it took the Parkland assassin to kill his victims.

Anyone who has lived with teenagers knows they are dramatic, willing to wear their feelings on their sleeves. The March was inspiring because it was adult-free. Its speakers, all under 20, were not afraid to weep, to rage, and to judge their elders. As one student asked, “Is there a will to bring morality to this country’s politics?” They were kids talking about their lives in vivid terms, not crafted into sound bites. Their stories were still raw, a little ragged, but emotionally charged. They were not afraid of showing their vulnerability, their fragility.

Teens don’t usually see shades of grey, and that, too, gave them an advantage. The gun control debate can often be driven by details — how do you classify and define an assault weapon, what about the estimated 300 million-plus guns already in circulation, how do you prove whether gun control works. They framed the issue in far starker terms: Gun control was a matter of life and death.

And teens, who like to challenge institutions, had a ready-made foe in the NRA. The gun group’s own attack ads heightened the students’ sense of moral outrage.

Students have another valuable weapon: the freedom to speak freely, without the fear of jeopardizing their jobs, their futures, or their relationships.

They also have the luxury of time. If they stay engaged, they can look forward to 60 years of casting votes.

As Parkland student Cameron Kasky proclaimed: “To the leaders, sceptics, and cynics who told us to sit down and wait your turn, welcome to the revolution. … For the first time, the corrupt aren’t controlling our story. We are. Politicians, either represent the people, or get out. Beware, the voters are coming.”