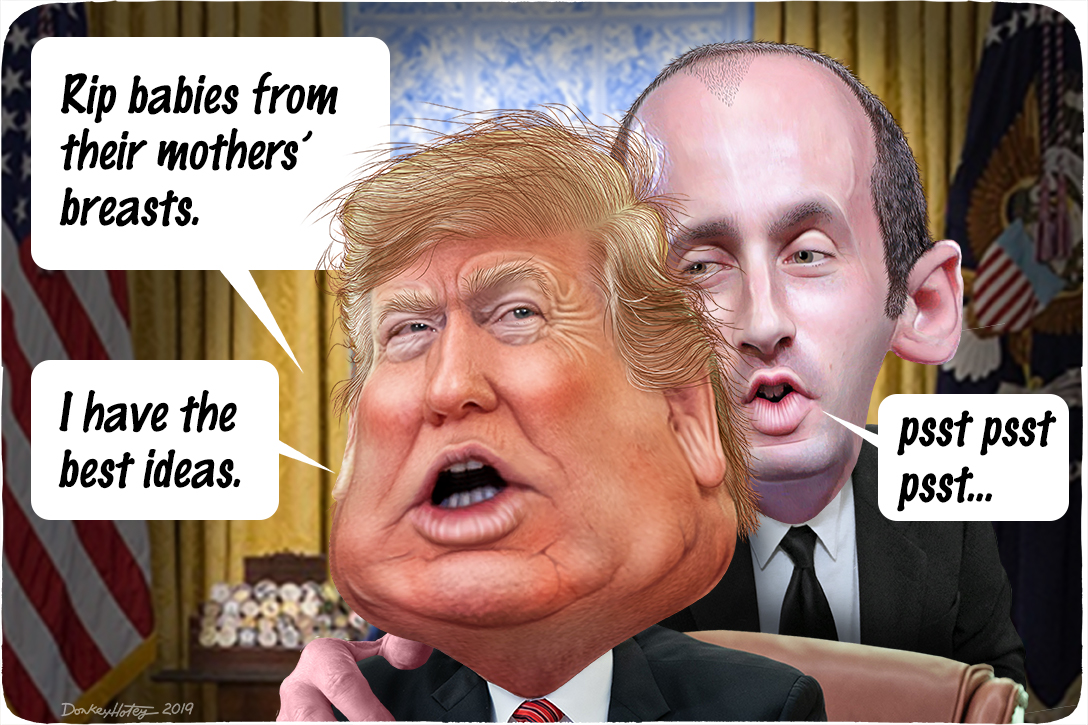 You claim to be the smartest person in the room, perhaps in the entire country. Yet you’ve let your aide Stephen Miller essentially become your brain.

The attention to Miller is bad for your brand.

After all, it was Miller who was profiled by both the Washington Post and the New York Times on August 18. In both papers, his picture landed on the front page. And it was the Sunday edition, the one that gets the highest number of readers.

Where was your picture that day?

The Times profile is all about Miller, not you. Your name is mentioned only 30 times, while Miller’s name appears more than twice as often — 73 times!

The paper gives Miller basically all the credit for your signature achievements on immigration, while the Post explains just how Miller has been able to wrest power away from you.

Times Journalist Jason DeParle calls him “an ideological chaperone to a candidate given to sudden reversals of signature policies, a role Mr. Miller continues to play in the White House.”

He is described as your “speechwriter, policy architect, personnel director, legislative aide, spokesman and strategist.” It doesn’t appear that you get credit for anything.

We know that you don’t think the Washington Post is credible, but still, reporters claimed to have interviewed 22 people who currently work for you — or did so in the past — and their story explores just how Miller exerts his overwhelming influence on your agenda.

The scuttlebutt in your own White House is that Miller essentially does all the heavy-duty thinking about immigration and then gets you to approve his initiatives.

Furthermore, Miller has been calling the people you appointed to head your agencies and badgering them. He is instigating revolts among lower-level agency employees, presumably to move your agenda. Or is it his agenda he’s promoting?

Heck, he even tampers with your teleprompter! He says he does this all out of love for you. But a little suspicion might be called for.

How is that working for you?

Remember when you were just beginning your first term, your Muslim travel ban provoked airport demonstrations across the country, and stories about families caught in the middle.

You lost the battle in the courts initially, until your original executive order got revised enough to pass judicial muster. But the fight wasn’t pretty.

And who can forget how Jeff Sessions’s “zero tolerance” policy for immigrants at the border separated more than 2,600 kids from their parents? Miller used to work for Sessions and he reportedly urged his former boss to make the call. (Not that it took a lot of effort: Sessions has been anti-immigrant for decades.)

But the blowback was huge. Seeing toddlers ripped from their mothers created another public firestorm. Even Melania was concerned. You were forced to sign an executive order ending the official practice of family separation for anyone who crosses the border illegally. Families could still be detained, but kept together.

Of course, you ultimately found a way to continue to separate thousands more families and to place kids in squalid detention centers.

Did Stephen Miller get tarred by any of this? Not really. No, this Svengali let you be the fall guy.

Mr. President, we know your views on immigration. But as a very successful billionaire executive, you have benefited from the cost savings provided by the undocumented immigrants who worked at your resorts and construction projects. So we know that, in your heart, you understand that deporting all immigrants living in the US would be bad for business. That’s Miller’s goal. Should it be yours?

Consider Miller’s newest brainchild: A rule change to clamp down on legal immigrants by making it risky for them to use food stamps or Medicaid. If they apply for certain public benefits, it counts against them when the US determines who gets green cards.

According to your former and current employees, you didn’t have a clue about what the public charge rule even was.

Miller has his fingerprints all over this initiative. Just wait until one legal immigrant family loses a child because they were too afraid to apply for Medicaid, and couldn’t get access to crucial medical care in time.

Do you think Stephen Miller will be stung by this? Nope, you’re always in the crosshairs when it comes to depriving immigrants of anything.

Sometimes even our closest allies can turn on us. Remember Michael Cohen? And look at The Mooch! Didn’t they both profess absolute love and loyalty to you?

We’re not suggesting Miller is about to betray you. But it’s possible that he’s a little too addicted to his power.

So when Miller whispers in your ear, or declares absolute adoration, you might just want to watch your back.