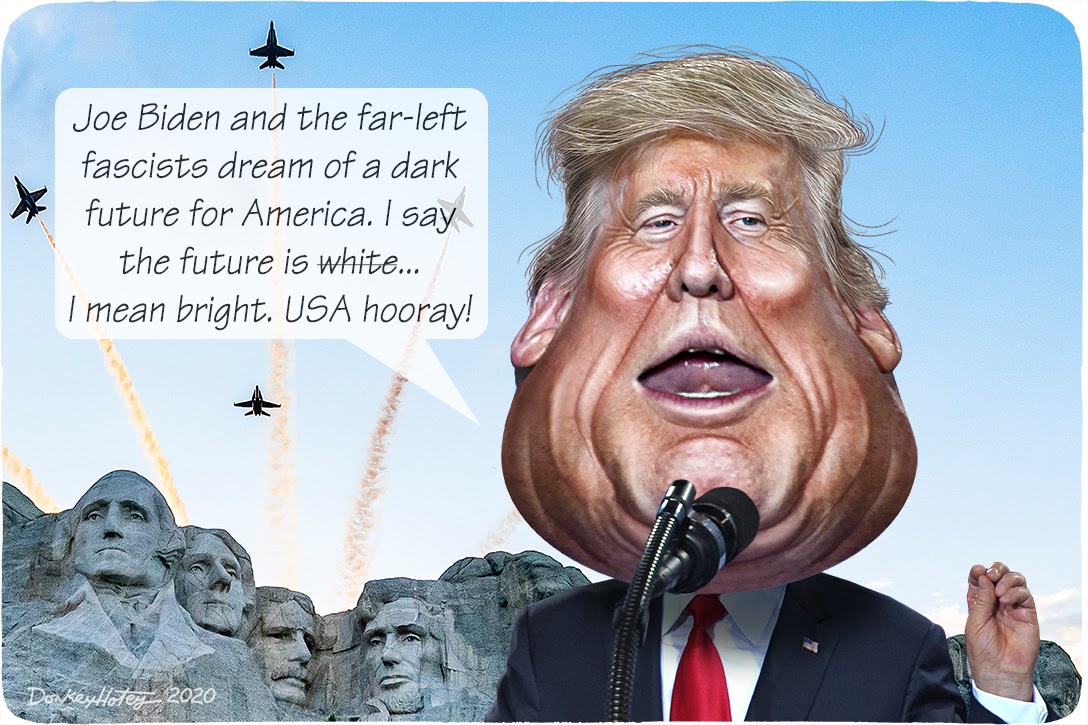 James W. Pardew was a career US Army intelligence officer who served as deputy J-2 (intelligence) of the Joint Chiefs of Staff and director of foreign intelligence for the Army. His diplomatic experience includes US special envoy during the breakup of Yugoslavia and US ambassador to Bulgaria.

In his Fourth of July speeches, President Donald Trump described the United States as a nation under assault by an extreme leftist conspiracy that seeks to destroy American culture, demonize national heroes, and indoctrinate children to hate the country.

Fortunately, there is another, more optimistic future possible for this country.

The United States is a land of potential, not of stagnation. America has always been a work in progress as we strive to achieve the promise of freedom and equality articulated by the founding fathers. Progress can be difficult, but we are best when we recognize problems and fix them, acknowledge wrongdoings and correct them.

Public protests are as old as the nation. From the Boston Tea Party to today’s protests regarding police violence against African Americans, periodic public demonstrations — sometimes violent and often containing extreme elements — have moved American democracy forward when the institutions of government have failed to address the common problems of the people. The current public protests throughout America follow that tradition.

As a white male who grew up in a small town in northeast Arkansas in the 1950s, I saw firsthand the unfairness and raw racism of a segregated society, and I have no illusions about the deep and residual racism in American society. I also recognize the lingering and hateful romanticism about the Civil War in many elements of white society.

African Americans have a unique place in American history. After the Civil War ended slavery, the Jim Crow South, lynchings, and segregation were a subversive, slow-motion form of rejection of African American equality that continues today.

Despite centuries of abuse, African Americans continue to hope and to struggle for change.

Black Americans have given their lives for this country in every war from the Revolution to Afghanistan and have contributed to virtually every area of US society.

Who can blame them for demanding the same fair treatment and chances as other Americans? Who can fault them for being insulted by public statues and honors given to Confederate leaders who committed treason against the United States and fought to keep them enslaved?

As Americans, we must confront the reality of American history. To do so is not to destroy our history or improperly indoctrinate our children, it is to face the truth. If citizens of the United States are unwilling to address the full history of this country — the tragedies and mistakes as well as the great achievements — then our perceived self-image is delusional.

Today, America has a major problem of racism within the local police departments in some of our communities. The video images are stark and irrefutable. A Black man is shot dead during a DUI arrest. An innocent teenager is injected with a drug during a police investigation and dies in the hospital. George Floyd is killed by a policeman with his knee on Floyd’s neck over an allegation involving $20.

I cannot imagine what I would feel or do if one of these victims had been my own son. I understand and respect the outrage boiling out of the Black community, and I want the problem of racist policing fixed. The diversity of the crowds protesting across the nation suggests that Americans of all races want it fixed as well.

As a caution, it would be unfortunate if the Black Lives Matter movement were to lose the vast diversity of its current support because of a small group of extremists attempting to dominate its agenda in the streets. At its core, the movement is about stopping police brutality and enhancing transparency and accountability. Those issues should remain its main focus.

Years of diplomacy to end ethnic conflicts in the former Yugoslavia taught me that diversity is a fact of life in modern societies, and the United States is no exception. We live in an ethnically and culturally diverse society. That fact is not going to change, as uncomfortable as that may be for some elements of American society.

If we are to live up to the democratic principles put into words by our founders and the greatest of the leaders who followed them, we have to accept the full equality of citizens within a diverse America.

The future unity and strength of the United States will be determined, not by race and ethnicity, but by shared political and social values and by the equality of justice and opportunity for all citizens. Those who reject the reality of diversity and the equality of citizenship are promoting a national future of constant confrontation and division.

The United States is not about to be destroyed, as Trump proclaims, by the demands of citizens who want justice, equality, and opportunity. If democracy in this country is toppled in the future, it is much more likely to be caused by the fear, hatred, and division created by a demagogue.

The cartoon above was created by DonkeyHotey for WhoWhatWhy from these images: Donald Trump caricature (DonkeyHotey / Flickr – CC BY 2.0) and Mount Rushmore (The White House / Flickr).